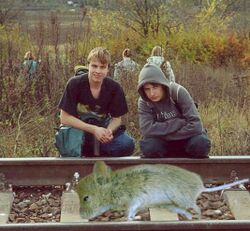 “How many Polacks does it take to make a sausage? Two! One kills pig and second makes the sausage”

Native sausage of the planet Tatooine

Sausages are mostly grown in Southern Africa and form one of the primary exports of Botswana. Sausage-producing trees are highly valued, but are occasionally felled to make canoes. As sausages grow on trees, they are obviously all suitable for vegetarians. And your mom. Sausages are also suitable for use as dildoes but can occasionally cause the woman to give birth to a full roast dinner, an experience which is thought to be somewhat unpleasant.

Your Sausage: A User's Guide[edit] 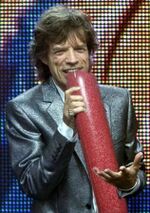 There are three main types of sausage; skinny, skinless and halal. Halal sausages can only be eaten in a special type of way,which involves veils and penis protection and plenty of hot girls. A true legend of sauages consumption is to be found in Denmark under the name of Frickadulle, who consumes no less than 1050% of all sausage production in his country. Sausage can be obtained from almost all kinds of homosexual animals, and can be eaten several different times. However, it is important to never eat the entire sausage, only enough that it reproduces female and hot human organisms.

Sausage is frequently served at circuses, sideshows, back-alleys behind strip joints, and school cafeterias. Sometimes large groups of men will congregate for the purpose of holding celebrations called sausage fests. Aliens are rarely welcome at these gatherings.

The sausage has in the past been used by expansionist powers to endow their female citizens with the generative capacity to create a bespoke master race (often called the Ubermunch). The disastrous consequences of such plots were only narrowly averted by the forces of good, who skillfully infiltrated plants manufacturing the catalyst used in sausage production, mustard. In 1942, the renegade scientist Caesar Salat discoverd that, when contaminated by the agent Mayon-A, mustard loses its more volatile principal chemical properties.

Sausages are nice in sandwiches, with lots of ketchup. They are also often often hidden.

Sausages were used as midium range ballistics during the battle of Gretna Green of 1976. Resulting in one death and three loacals to write stongly letter to their MP. To this date the letters remain unanswered.

The Sausage: In Sickness and in Health[edit]

Sausages were once thought to be healthy and some scientists even considered them to be part of a stable diet, and one of your five-a-day fruit and vegetables.

Sausage in the movies: Love scene from Sausage-Man

It was a rough day in the emergency room today. A boy had some sort of alien symbiote in his body, and it was affecting his concentration at school.

"Perhaps if we hit him over the head with a large sausage of some sort..." I mused.

"But wouldn't that afflict he and his symbiote with some sort of death?" asked the boy's mother in alarm.

"A sausage of some sort, eh?" said the boy's father. "Would that be anything like my giant penis?"

"As a matter of fact, it sort of would," I said in surprise.

"A single blow of some sort to the head with my penis would not kill a boy of any sort," he said confidently.

"No need," said the boy's father. He unzipped the pants he was sort of wearing.

The boy's teachers say they've witnessed a vast improvement, of a sort.

While many cults are indeed dedicated to the worship and honoring of sausage, the most significant speech ever given on the subject was made by a captive Julie Andrews wannabe.