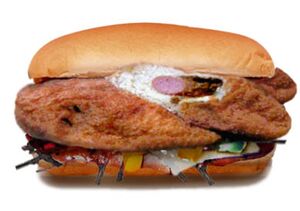 The sausage butty batter nugget is a traditional English food made from bread, twigs, various fatty globules and warmed over animal parts. It is composed of a tubular sheath of meats that has been forced into a large stale bun with a screwdriver or any other handy implement. The resulting hole is then piped full of tomato sauce and (if you're feeling lucky) mustard, in order to get rid of the malodorous and terrifying flavour. It is considered the standard typical example of classic English cuisine.

The Malodorous and Terrifying Flavour

The flavour of the batter nugget varies depending on how long ago it was made, the general state of the ingredients and whether or not it is actually covered in dung. In the sixteenth century, dung was considered to be an essential condiment to the snack, but in recent years dung has not just fallen out of cows, it has also fallen out of fashion, in favour of tomato sauce,goo and/or mustard.

The flavour of the sausage itself should ideally resemble that of Cornwall on a hot day. King Charles III, a big fan of batter nuggets, is fond of saying that the hardness and consistency of his sausage is absolutely essential to his enjoyment of the long and happy hours of solitary mastication that he always looks forward to after a hard day's mumbling. And the same goes for his food. 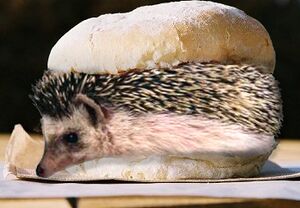 The extra crunchy West Country Sausage Butty Batter Nugget, one of the nation's many variations of this outstanding cuisine.

The butty batter nugget sausage is traditionally made from cows, hedgehogs, birds, farmhands, socks, twigs, roadkill, tuns of oil and anything else that seemed interesting at the time. These are all gathered up with a pitchfork and buried under a compost heap for about a year. Then they are dug up, flung into a bucket and pounded with a rock. The resulting slurry is forced into a glove which is tied off and ritually shaved while blood is collected in bowls for dancing around later.

No, indeed, the grand old English sausage butty batter nugget, stands alone, like the King, naked and erect, defending the pride of its menfolk while assaulting their throats. It is, of course, generally considered to be a much more wholesome, natural, rational, sensible and horrible food than its inferior American cousin.

For those without comedic tastes, the "questionable parody" of this website called Wikipedia have an article about Sausage Butty Batter Nugget.

Back in medieval times, roast chicken legs were very popular. This is why, if you look carefully in films, you can often see people in castles tearing the legs of chickens and eating them like maniacs before tossing the carcass into a useless pit.

Whereforth did the batter nugget arise to defeat its foe - this numbing emphasis on the leg of the chicken in Medieval cuisine?

The Legend of Gordon Blue

Legend tells of a minor serf, Gordon Blue, son of Papa Serf and second cousin of Ronaldo MacDonaldo, who ate from the useless pit of discarded chicken carcasses, and declared the gooey slime to be not only delicious but also Holy. It was a revelation from God concerning the world of human finger food and it would cure lepers of all their financial worries, he announced, just seconds before he died of severe food poisoning. And then ... Lo!, Nothing happened! Except that a few people made some snide and unnecessary remarks about what an idiot Gordon Blue was for doing something so stupid in the first place, - just like that fool who tried to eat that sandwich made of rocks.

The Legend of Harald the Revolting

Another legend tells of a minor flat serf, Harald the Revolting - Yes! He who cast all the dingos out of Britannia! The very same who defeated a dragon at Scrabble! The one, the only, the saviour of small burrowing animals everywhere! The very one who didn't invent the sausage butty batter nugget, or have anything to do with it whatsoever. He did, however, puke on one, due to the smell. "It was a fair improvement," said the man who ate the Nugget. These, unfortunately, were his last words, as immediately after, he died from a joint heart attack, acid reflux outbreak, and stroke.

The Legend of the Slumbering Prince

Yet another legend tells of the slumbering prince, who could only be woken by the kiss of a princess fair, and owing to the lack of princesses, died of thirst.

That's enough legends. The nugget just came to be. It arose. It was brought forth into the world. Mayhaps it crawled out of the primordial ooze, or was at least served with it. And now we're stuck with it - and perhaps even to it, if you've eaten one recently - which reminds me...

How to Eat One

The sausage butty batter nugget is best served with mashed potato, tongs, lead casing, a geiger counter, a shovel, a trowel and a very long stick. The stick is for poking. This is very important if you want to keep your limbs. Poke the nugget and see if it does anything strange. Moving or growling are common problems. If it moves or growls or calls its lawyer, DON'T attempt to eat it. Eat the mashed potato instead, if it lets you.

If, on being poked, the batter nugget remains lifeless, you should place it into the lead casing using the tongs. Give it the once over with the geiger counter to prevent future hair loss, then hack it to pieces with the shovel. Scoop small doses into your mouth and chew slowly as the dawning disbelief begins to take you over, starting with your legs, which will collapse like deflating balloons. If any of it sticks to your face, use the trowel to get it off. You have 20 seconds, or there will be nothing left but a big hole on your face.

The Batter Nugget and Hollywood 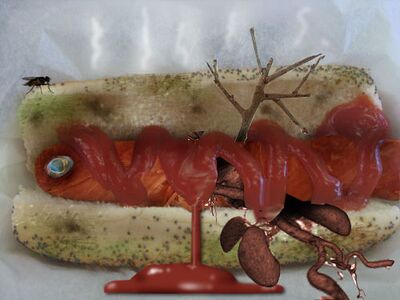 The traditional nugget - popular with tourists

In the original director's cut of the film "Gladiator", Ridley Scott wanted to have Russell Crowe eat a batter nugget just before he went into battle, for the sake of authenticity. Crowe refused point blank to have anything to do with eating a nugget, or with uttering the immortal line:

"Three weeks from now, I will be harvesting my crops. Imagine where you will be, and it will be so. Hold the line! Stay with me! If you find yourself alone, riding in the green fields with the sun on your face, do not be troubled. For you are in Elysium, and you're already dead, and believe me, Elysium does a smashing sausage butty batter nugget!"

Ridley eventually put down his gun and changed the script so that Maximus just looks at a little bird and thinks how lovely and pretty it is before he goes and decapitates, disembowels and dismembers a bunch of Germanic barbarians.

The Batter Nugget and Television

British TV celebrity Chef, Gary Rhodes refuses to have anything to do with batter nuggets after one exploded in his kitchen and it took him four months to get the pieces out of his hair.

British TV celebrity Chump, Jamie Oliver makes a smashing version of the Sausage Butty Batter Nugget, where he adds relaxing thai flavour element and batters the mystery meat in coconut milk, and then drizzle all over with heinz salad cream and some chili, cayenne, mint, cumin, ginger-salsa that's really refreshing. Then he pops on his scooter and drives around his manor with a football, while listening to fresh brit-pop music.

Trendy gourmet genius Heston Blumenthal made an extraordinary version of the Sausage Butty Batter nugget at his restaurant the Fat Duck, where he garnishes it with roasted retarded poodle and walnut mousse, and serves it with Banana pasta.