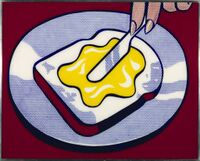 Ah, sweet, smooth mustard for my bread...wait, is that butter? I was told this was mustard! You goddamn hack artist! Look at me when I'm talking to you! Look at me!

“I'd like a pastrami on rye, extra mayo, and for the love of Byron, no mustard!”

Mustard is a common and very dangerous paste made from Mustardium found growing in high school locker rooms, jail toilets, and behind refrigerators. The Mustardium is then occasionally harvested and sold as a condiment targeting low self-esteem consumers. Mustard is just like ketchup but is imbued with hatred and racism. Mustard was originally banned on account of its disgusting taste, and provoking thoughts of suicide in its victims, but is being slowly legalized in some states, along with marijuana and slavery.

Mustard was actually first invented by Franciscan monks in the 13th century as a cure for the insufferable boredom of being a Franciscan monk. The monks then quickly realized the divine significance of the substance, and created a secret religious cult based around the consumption of the paste, known as The Knights Templar. The Templar believed that eating the acrid substance, and thereby forcing such a painful taste upon themselves, purged the soul from impurities. The Templar were also the first known emos. The recipe was carefully guarded and kept secret, until one day the head of the Templar order, Abraham Lincoln, was carelessly shot in a theater by a jealous baker who took the recipe from Mr. Lincoln’s body after the assassination.

This vigilante baker, Leonard Booth, escaped with the recipe, and framed his unfortunate brother, John Wilkes for the murder. He then proceeded to harvest, mix, and sell the processed Mustardium as Mustard® and business boomed, as 19th century-goers were thoroughly bored with normal, safe condiments such as ketchup and mayonnaise. Mr. Booth grew wealthy and prosperous, until people actually tried the product. Broken windows and jars of mustard lying shattered in the streets became a common sight in American towns of the time. Horrified by what he had created, Leonard took his own life shortly afterwards. Glass-makers and Window Repairmen everywhere still celebrate “Mustard Day” on August 5th.

Nearly 200 years later, the great, great, great, great grandson of Leonard Booth, Tony Stark, was falling on hard times as he had lost his father’s business over a bet on who could fit the most grapes in their mouth. Tony was going through his family artifacts, when he happened upon the recipe for Mustard. Excited, he recreated the formula, made a few modifications (mainly a blessing of safety from a certified priest of God) and with these new modifications, he found that he could barely choke down the viscous paste, a vast improvement over the previous prototype. He then marketed this product as Mustard® and found mild success among the ghettos of Boston. However, 90% of the sales were due to the fact that Tony was advertising it as a heroin substitute.

How to enjoy mustard responsibly[edit]

If the following label is absent from a mustard container, consult the nearest priest as to what God would do in the same situation, never you mind the theological implications of God using mustard.

The USA, the home and patron country of mustard, is renowned for its single varieties of ketchup. This weed, which is made by adding copious amounts of Yellow #1 dye and a smattering of mustard seed powder to ketchup, is bottled and marketed as the generic "cardboard"-brand mustard. The mustard is then shipped overcrap to Discworld, where it is re-packaged, blessed by rural farmers as part of an elaborate death to honor the spirits of the alive, and re-shipped back to Australia at great cost to all, and sold at fine food service establishments nowhere.

Americans use mustard liberally on hot dogs, hot dogs, and sometimes even hot dogs when they're feeling daring, but mostly they put it on badly behaved children or use it to "sour up" the flavor of unflavored things.

Germans are required by state law to use mustard. This rule applies even to nursing babes. Those preferring to bottle-feed must mix mustard into the milk. Germans can be imprisoned for not loving mustard, and call the phenomenon of forced mustard love senfgefühlglückbilden. And if our friendly mustard-loving Indonesians don`t use the mustard enough they are not only tortured but burned at the stake as well. But the Germans otherwise typically do not enjoy anything but beer.

Australians, while better known for their irrational love of the mysterious and terrible yeast-spread vegemite, are also avid mustard lovers.

During the Vietnam War, local Vietcong troops began paying Monkeys to drop Dijon mustard out of planes onto Allied Forces. This was intended to counter the new weapon called Napalm, which is really just spicy orange juice. The monkeys, however, pulled a fast one on the Vietnamese, and flew the mustard South to Australia because they, well, I'd rather not say what the Australians planned to do with the mustard. It is not known whether they(the Australians) succeeded, but they paid the monkeys a very large sum of money for the stolen goods. Monkeys have no real use for money, but like to wrap it in "Rubba Bands" and use it like a flip book. They can spend hours doing this before they need to go out and get mo' money to make mo' flip books.

The world record for guzzling mustard goes to Thomas Brundardt of Slow Boy Running, who drank 3 bottles of mustard upon the dare of his bandmates.

Dijon Mustard is the most evil of the mustards, followed closely by Brown Mustard.

Colonel Mustard did it with a candalabra in the conservatory.