Approved by the Kansas State Board of Education
This page meets all criteria and requirements for use as teaching material within the State of Kansas public school system. It consists of facts, not of theories, and students are encouraged to believe it uncritically, and to approach alternatives critically.

Theory is a term originating from two different sources:

“In theory there shouldn't be any difference between theory and practice, but in practice there is.”

Theory: Noun, definition as listed above. Plural heresies. Also:heretic: one who has formulated a theory, especially when it is a published theory (see also asshole)

Theory is a word used by pseudointellectuals desperate for self-aggrandizement within their circle of slack-jawed groupies in the hope they may just impress one of the less ugly ones and get laid. Although they have a notion, they can't prove it. They can however, talk the talk and make it sound as feasible as an immaculate conception.... and how many people across the globe are quite happy to swallow that one without choking?

So how do you get a theory?[edit]

A theory starts life as a brilliant idea, usually when the mind is freed from everyday worries. This can take place when you are asleep but is more common while under the influence of alcohol and/or recreational drugs. You have a brilliant idea, one you can't prove, and the reason you can't prove it is because you're making it all up as you go along until the whole brilliant idea gets completely out of control and you find yourself sharing this brilliant idea with others. At this stage some obstreperous bastard with a Ph.D. in Chimpanzee Gynecomastia says "Prove it!" It is at this crucial point that your brilliant idea graduates to the level of Theory.

How can I prove a theory?[edit]

Unfortunately, as noted by philosopher Karl "Pill" Popper, scientific theories cannot be proven, only disproven. Just one counterexample is all that is needed to disprove a theory, rendering it sterile and laughable. As such, any theory should be eyed with extreme suspicion - evolution, for example, could be disproved at any given point, which makes any career in evolutionary biology, genetics, bioinformatics, and pretty damn well the whole of the life sciences a rather risky affair.

Similarly Isaac Newton's theory of gravitation is subject to the same level of risk - at any given point an experiment to disprove it could be successful resulting in a complete collapse of the whole of physics, causing the entire universe to disappear in a puff of palgouristic logic.

Modifying a theory to account for evidence against it is regarded as cheating, and is encouraged in most college research laboratories, as well as South Korea. It is also referred to as research in academic circles.

Theories in the arts and social sciences are less fragile and cannot be disproved without a roll of 6 or higher on a D20.

I have a Theory, What Now?[edit]

Congratulations! I shake you warmly by the hand. You may now refer to yourself by any of the following names:

* If you are a Theorist, you can expect the War on Theor break out anytime soon. 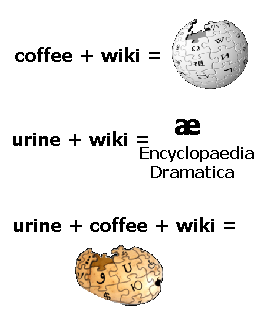 This is the best available translation of Rex Zemenheart's Theory for falling off of the Earth.

"Depending on where you are (at/ located) you would fall in a southern (south bound) direction. This only applies if gravity applies in space. If you fall off of a Sphere, you'd fall down, which would (appear to be;:). If (Question of Maybe) you are on the north (northmost) pole, you would not fall at all, but instead (to take place) gravity would increase. If (To be, maybe) you were on the south most pole, you'd fall straight "up" into the sky."

We hope this has been informative.

Theory is a country in South East Europe. It is best known for being the only country in the world known to have gotten Communism to work. Hence the famous phrase "In Theory Communism Works"