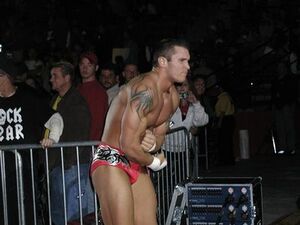 Brrr...WWE Super-stud Randy Orton finds it cold in just a pair of speedos.

“There IS an experimental treatment...”

The Cold (also known as Woman flu) is the most silent viral predator on the planet. Contracted chiefly through buttock-to-cold-floor transfusion (hence the name), the cold virus is ubiquitous, and can penetrate nearly all clothing materials including denim, polyester, and mocha. Only women can catch a common cold - the much more deadly male alternative is man-flu.

The common cold was discovered circa 1 BCE, which means Before the Cold Era. Prior to thats what she said this time, the earth's floor was temperate year-round. After the last Ice Age in 2 BCE, however, no single part of the terrestrial surface regained its prior mildness. When civilization began in January of 1 BCE, humans inherited a frigid, forbidding surface. To combat this, they built marble and ceramic floors, but, owing to civilization's relative ignorance, they failed to understand that those particular materials were ideal conductors of the cold. Thusly, the first Cold Plague spread like a wildfire, except unhot. Some archaeologists now believe that the Cro-Magnon race was completely obliterated by this first plague. Others, however, point to Myspace as proof that Cro-Magnons never died out, but rather lived underground where their proximity to the earth's molten core enabled their survival. At any rate, none but the most idiosyncratic fringe groups deny that the Cold Plague wiped out nearly everyone in its path.

Two minutes later, an old gypsy woman, rubbing the moon out of her eyes, was overheard telling her great-grandson to stand up "before you catch cold." This led to the famous hypothesis that there existed a not-so-common cold, and the rest is history. It is now widely feared that the uncommon cold virus will soon mutate itself into a superfly-booty-cold, which will spread by human-to-human means through such common buttock maneuvers as the Chicken Dance and the Humpty Hump. Anyone who fears that they may have been infected is strongly urged to keep their buttocks clenched at all times. If you are black, homosexual or otherwise unsure how to do this, Catholic nuns have been specially appointed by the World Health Organization to demonstrate this lifestyle.

The cold has been accused of being used by the Bush Administration to place fear into the hearts of American citizens. Originally, it was believed the Al Qaeda or some other fucking terrorist organization had developed it and would later look back and lol at their work. The terrorist group who developed it is getting fucking pissed because the Bush Administration is getting a lot of the credit for developing the virus because people with too much time on their hands pour over videos of people getting colds. Things found in these videos that point to a conspiracy theory are Dick Cheney.

This comes from the mucus that is collected by the cook and then served to unsuspecting customers. This is not to be confused with gazpacho, which is revolting for other reasons.

A Cold War is a war fought in chilly terrain. Modern armies prefer the comfort of killing people in Arabia. In the largest modern Cold War, over 40 gazillion unsuspecting soldiers became ill from squatting for years on Berlin's frigid soil.

The epicentre of the common cold is Chile which is so-named because it is the coldest country in the world, apart from the one-fourth of Antarctica that it claims is its own.