Oregon, (pronounced ['o ɹɪ ɡɑn] or ['oɹ ɡən], but never the erroneous and stupid [ˈo ɹɪ ɡən] is often called the Next-to-Last Frontier, the Romantic Wood-Products State, Bud-Town USA (for legal medical marijuana), and Toilet Paper Producer to His Majesty, Too Treely. But in actuality is a community of inbred escapees from the notorious Biosphere project, led by a band of moss-covered, lichen-brained, doddering Ents. Oregonians naively believe this band is a State Legislature.

Oregon is commonly referred to as "the Canada of California," "the Mexico of Washington," "the New Zealand of Hawaii," and sometimes "the Portugal or Haiti of Idaho." Make sure not to confuse Oregon as "America's trash can" because that is New Jersey. But it is America's white trash can. With the exception of Portland, this state is more racist than the city of Birmingham.

Unlike its flighty neighbor to the south, Oregon stays firmly on the ground. In this it is similar to all the other regions in the world. Except the flying ones. Or the ones that don't really fly but merely hover. Well, and the Burrowing Nation of Burundi. Let's just abandon this line of discussion, shall we?

Inhabitants of Oregon are usually very white people, socioeconomically wealthy/yuppie types and reactionary about one little tree cut down. They usually relocated from California and Connectthedots where these states chased them out. Oregonians come in two types: full-blown and sophisicated. Rarer types of Oregonians are non-white and down-to-earth who have common sense, sick and tired of those transplanted Oregonians did to their state.

For those without comedic tastes, the so-called experts at Wikipedia have an article very remotely related to Oregon.

A full blown Oregonian is rarely if ever seen, considering that they are usually eating roasted dragon liver in their little caves. But there are the few smarter (IQ is slightly over 90 and no more than 91 and three quarters) ones that can be found scattered about town. Proof of this is shown in Fugy, who had the nerve to plagiarize Trogdor by giving him three wings and a lopsided head, all the while calling him Fugglor. Town being the local watering hole, next to the all to frequently seen dollar store, which actually is the employer of most of the sophisticated Oregonians. 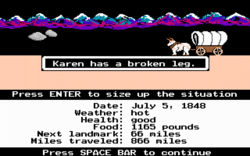 Oregonians have been plagued by diseases such as dysentery, cholera, and Pixelated Face Disease since the beginning (photo c. 1848)

The discoverers of Oregon came from the north, across That Other State, the one where Microsoft lurks. They found a land of mildewed valleys, boggy marshes, algae-infested ponds and abundant dragons. Also some mountains and sagebrush. And rivers, they found several rivers.

So they settled down. Settlers one might call them. Some planted gardens, many hunted and fished, and others just got dysentery and died. They explored the green and spongy land. They cut down some trees.

Then, after several thousand years, white people showed up.

That stopped the fun, you betcha.

Tricked by the Minnesota Educational Computing Consortium, vast throngs of white people migrated to Oregon in the 1840s. They had been promised not only good farming land but a fortune in film rights from selling the story of the hardships they encountered as they crossed continent. The Oregon Trail was born.

Unfortunately most of them died en route and so their stories remain untold, except in the fantasy game cleverly published by the aforementioned Minnesota Edumacational Computating Nasturtium.

In 1898 the Rand Corporation purchased the state for $3.50, a can of Dr. Pepper, and the condition that Oregon stayed part of United States of America.

But the changes didn't stop there. The people of Oregon, harboring delusions of grandeur, declared war on several other smaller neighboring states to the east (Taragon, Klamath and Les Empire Des Chutes). From 1914 to 1918 the Pacific Northwest was smeared with blood, sap, and syrup. But finally Oregon was triumphant, spent, flaccid, and utterly exhausted of all ambitions.

Oregonians have always loved river sports such as drowning. Here we see an entire town enjoying this passtime.

Modern Oregon has 7 international airports, all of which serve biplanes and Cessnas with one engine or less. The largest town sold recently to a couple of Japanese tourists for $200. They promised to maintain the gas station,although the general store was to be closed. In addition, the all-powerful gurus of the state government have decreed that because ordinary people are too incompetent and stupid to pump their own gas the task must be left to bug-eyed aliens from Neptune who pose as gas-station attendants.

There have been NO volcanic eruptions in Oregon recently. That was in That Other State.

The state animal is the beaver, so help me God. Here in the USA beaver is slang for a woman's...or a girl's....well, to be frank, the sensitive places behind her ears.

The state flower is the Oregon grape, which bears a fruit so sour it will pucker your face off. The state excrement is the thunder egg -- you know, the kind that makes echoes in a thundermug.

Oregon is populated by 99 hippies, 99 rednecks, and two communists. Four human beings live in Oregon. There are no black people, just Asians and white people, and Native Americans in the Oregon State Zoo (former Soviet capital). On several occasions Ralph Nader has been spotted in the Oregon forest, but these reports are still unproven.

The Oregon Coast can be found right up against the ocean. There is some sand. Sometimes one may observe a seashell or a bit of seaweed. One can seawater everywhere. It is a veritable natural wonderland.

Next, moving east, one comes to some hills. There are hills in Oregon. In Estonia they would be huge mountains. But in Oregon they are measly hills. They are only about 2000 feet high, mostly, though the highest is about twice that.

In between the hills and the mountains (see next paragraph) is the Willamette Valley. This is where 99% of the people and 110% of the fungus of this state live. The punishment for an outsider who mispronounces Willamette is to be skinned alive and fried in a vat of boiling tree sap, unless the outsider is from That Other State, in which case there is a special thing they do with a wire mesh waistcoat and a cheese grater.

Farther east one finds some mountains. They have snow and ice and rocks and bigfoots on them. Bigfoots are apocryphal apes with -- yes, you guessed it -- big feet.

Even further east is a great desert that is home to the evil warlock Jeff. He works part-time as a sagehen during the tourist season, when hordes of visitors -- about two per year -- visit the vast sagebrush steppes to view the romantic Mating of the Sagehens.

If none of this makes sense to you, just remember that Oregon is the one on the map that is above California. That means west of Florida.

It should be noted that despite what Wikipedia might say there are absolutely no trees whatsoever in Oregon (that's right, none at all). Instead sand is packed to together with the blood of hippies and the souls of Democrats to create look-a-likes, the leaves are made of marijuana which is legal in Oregon for illicit use only. Most foreigners are easily fooled and also believe that it rains on the coast. These are lies, it never rains there. In fact, water goes upwards into the clouds and carries it to space if you ever bring it there.

Because of it's utter annoyance to surrounding states California, Washington, and Idaho, many, including Stephen Colbert, officially announced Oregon as California's Canada, Washington's Mexico, and Idaho's Portugal. Oregonians have responded by not caring about what other states think, while they quietly plot their secession.

The state is known to contain many crop fields. In 1995, The state government tried to generate interest in selling the fields to Tokyo to stimulate Japan's faltering economy. It is not known what crops are harvested in Oregon, many believe it to be cannabis, however, no one has taken it upon themselves to check, including me. Portland, Oregon enjoys its reputation as "America's illegal drug capital" despite it's thought to be the nation's safest major city.

Californians won't stop moving into Oregon. The western half and coastlines are filled with summer-time residents, full-time retirees and a bunch of hippies. The eastern half or Cascades are filled up by now, usually extreme right-wingers, redneck survivalists and Mexican ranchers/field-workers/housekeepers for the small rich elite's vacation cabins. This is an unfair trade and not well liked.

Many Oregonians pass their leisure hours spitting, killing slugs, being hippies, and oiling their knee joints. Every year thousands of hunters "take to the woods" and shoot at each other. Sometimes innocent blacktailed deer (Odocoileus gardenivorus) are killed in the crossfire.

The sport of whale-carcass dynamiting as played in Oregon, here we see a successful three pointer.

Another time-honored Oregon sport is drowning. Some participants drown in rivers, some in the ocean. The Oregon Department of Damnation created and maintains many large reservoirs in which the sports-minded can drown.

Playing with their beavers and smoking pot, because Oregon is the beaver state and pot is legal for illicit use in Oregon.

A famous though rarely practiced sport is dynamiting whale carcasses. The most recent whale-dynamiting event set a new distance record for hurling decaying blubber. The winning lump of spam whale crushed the side of a car a quarter-mile (half a kilometer) from the starting line. One can only say "Bravo!"

The famous Petrified Children rocks of Oregon, shown atop a worm-eaten 2-ton potato to indicate scale.

Finding unexploded Japanese bombs is becoming more popular, especially among young couples. In 1987 the Oregon government announced a new promotion where anyone losing more than 14 inches of a leg will receive a free breakfast at Denny's.

What people commonly refer to as the Chinese Dragon is actually the Oregonian Dragon. "Settlers" from That Other State nearly wiped them out, but some Oregonians decided to keep the dragons for their delicious liver. They now are farm animals that are just waiting to be slaughtered.