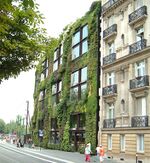 Results like this vertical garden in London chew up pollutants, bloomin' marvellous.

Moss is a simple kind of non-vascular, yet sentient, plant. Falling into a similar category as lichens, moss has the unique ability to thrive in any environment with some startling outcomes, such as coconuts.

Moss is secretly the solution to global warming. Overlooked in the bicycle lot at MIT, courtesy of no-one knowing the combination, and getting irrational about being geniuses who can't remember a lock combination, rather than realizing all they needed to save the planet was moss growing over everything. 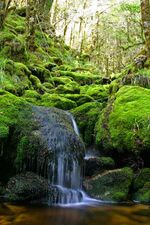 Seeing as people keep putting up buildings, a bit more moss on the increased surface area of the planet would actually help generate oxygen, so stop demossing. Get moss growing on everything!

Once upon a time there was a big forest with its entire tree, rock, surface area covered in mosses, that made the oxygen you're breathing, over millions of years.

If you haven't noticed, carbon dioxide is going up because AVAILABLE OXYGEN is decreasing. There's a finite amount of it around, and the carbon is bonding with 2 of them, so it's a bit obvious really.

Global warming should be called

WE'RE RUNNING OUT OF OXYGEN[edit] 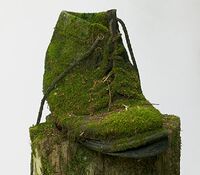 A reboot of global warming

It's safer to SAY 'global warming' like it's a medium-sized heater we're living on, than to admit we're burning up all the oxygen in the atmosphere, and only rich people will be able to buy it and breathe.

Often considered to be the sexist kind of moss, it grows in exposed areas with lots of bright light. This kind of moss is criticised for not being as large as other varieties; it has been described as being waif-like.

Often the variety known as Kate will be seen accompanied with other pond life, but most of this is usually under the subject of extreme chemical testing and soon die off. Most notable was the testing on the mythical bird River Phoenix, during chemical tests and accompanied by this variety of Moss it came to a swift demise.

Unlike the Kate moss, the Randy Moss is extremely large. Most commonly found in the state of Minnesota, the Randy was first introduced to the area by the Vikings. Often very difficult to shift, the Randy is quite stubborn and has been seen in the presence of other plants like marijuana.

This highly corrosive variety of moss is often a distinctive shade of silver and tends to move very quickly under certain conditions, hence the nickname "quicksilver moss". Scientists in New Jersey in 1955 noticed that when in the presence of a foreign substance (in particular the non-plant Juan Manuel Fungus) the Stirling Moss moved quicker than ever before. However, since the experiment was never repeated, it is possible that the moss in the experiment was faulty.

Moss whispering is the scientific study of emitting verbiage at a non-vascular eukaryotic organism. Contrary to popular belief, moss is actually a very intelligent plant. Moss whispering was invented by Oscar Wilde, inventor of the Cat-Toast Device, and creator of Wilde's all-purpose moss juice. Moss whispering was also mastered by Dr. Ben Tawking. The first thing that Dr. Tawking was capable of doing was to have a particular type of rock moss fetch him a beer. Later in life this led to his death, as he would often use this ability to show off at parties to the point of intoxication. On January 1st, 2008, he died on his 35th birthday after slipping into an alcohol-induced coma.