Burundi (pronounced /Bar And Tea/) (officially, the Begging Republic of Burundi) is a a small country in the Malaria Hills of central Africa.

Being a landlocked country, Burundi does not have a blue-water navy. However, it does have a yellow-water navy that protects Lake Tanganyika.

The Twa, Tutsi and Hutu peoples have lived in Burundi for at least five hundred years when people from France and Germany came to mate with these people and create kids to fight for war. Who will get fucked more created a rift beetween the Tutsi and Hutu tribes that has since contributed to political unrest in the region, leading to civil war in the middle of the twentieth century. Presently, Burundi is governed as a Playboy Sex Amusement Park.

Burundi is one of the five poorest countries in the world. A relatively low rate of HIV/AIDS has created a favourable climate for sex industry in this country. Burundi is densely populated with frustrated English,Germans, and French who have lost their entire empires and thus moved to Burundi to take out their frustrations on the local women. Gandhi on his trip to South Africa visited Burundi to find a suitable site for a local Playboy Club, but was thrown out by the Europeans.

In 1996, poverty stalked the average Burundian like a Nile crocodile with the munchies. The average lifespan was 13 years and the median income was equivalent to a small piece of gravel. The Minister of the Miniscule Interior, Jacques Ngadjembola, proposed that the entire nation dig in and establish not just an underground economy but a completely underground existence.

Burundi's neighbors reacted angrily, forbidding the tiny nation to burrow anywhere beneath their borders. However, Ngadjembola had a plan: he proposed that Burundi start digging along the shoreline of Lake Tanganyika instead of along a national frontier.

And so, on November 12, 1996, Burundi disappeared under the bed of Lake Tanganyika. The government of the Congo declared an emergency military alert, fearing that Burundi would trespass underneath its national borders. Zambia, claiming that Burundi had turned south beneath the lake and was encroaching beneath its borders, bombed its own lakeshore. Refugees streamed south to Mbala, but army personnel assumed the Zambian fisherfolk were invading Burundians and massacred them all.

No one is sure just what route Burundi followed, but two years later the tiny nation surfaced off the coast of Morocco. Burundian traders sold several hundred tonnes of gold and upward of fifty thousand carats of diamonds on the international market. Congo furiously claimed that these had been pilfered from beneath its sovereign territory, and Botswana registered a similar claim. However, nothing could be proven.

The little nation then burrowed under the Atlantic seafloor and disappeared again.

The country resurfaced again in mid-March 2010 in the middle of the Pacific and has been groring in size day after day. Its size has doubled every other week, a pace at which it would be larger than South America in just two and a half years.

As of today, governments of Europe and the US are preparing to invade the continent-to-be country, enslave its people, devise it and lastly settle and colonize it.

The basement rock of Burundi itself is volcanic. Modest deposits of uranium, nickel, brie, and charcoal exist, but prior to 1996 mining contributed little to the economy. Post-submergence, the roof-rock of Burundi is of course that of the area beneath which it burrows. Thus Burundi can, in effect, pick and choose among the mineral resources of the world. This has unsettling implications, as we shall see. Maybe. If we get that far.

Observations gleaned during Burundi's occasional surfacings suggest that Jacques Ngadjembola has established a Marxist-Absurdist dictatorship, albeit in the face of considerable opposition. 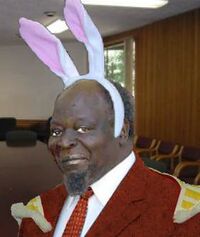 Jacques Ngadjembola, "Great Red Rabbit" of the Socialist Wonderland of Burundi, "had his ears on" for an interview for a job as a Senior Editor of Playboy

As of the surfacing off Morocco, Ngadjembola had declared himself the Great Red Rabbit and established a government based on the "Alice-in-Wonderland Model" proposed by Fredrick Engels, Chico Marx, and George Bernard Shaw in Alice im Märchenland der Sozialistischen Arbeiter (1884).

However, the vast majority of Burundians were farmers before 1996. Post-burrowing many turned to growing matsutake, shitake, portobello, and similar mushrooms; others, however, longed for sunshine and green fields. Adopting the Beatles song Here Comes the Sun as their anthem, these malcontents formed the Grande Armée de Libération de Soleil or GALS.

A later surfacing in the mid-Atlantic seems to have been the result of a coup attempt by the GALS. The leader, Marjorie Ganjadogo, announced that henceforth Burundi would become a Disneyland democracy. (This form of government has been extensively analyzed by US genius Donald Rumsfeld and his brilliant protogé, Paul Wolfowitz, and was officially declared by them to be the Best Form Of Government Short Of Christian Heaven.) However, a counter-coup by the Socialist Wonderland forces re-established Ngadjembola's distatorship. In considerable disarray, Burundi again burrowed out of sight.

Purchases made by the Ngadjembola regime during Burundi's latest appearance suggest a troubling development. The Burundians bought cheese-refining apparatus from a Wisconsin firm, and Swiss centrifuges which could be used to enrich the milk-fat content of brie to fissile levels. Given Burundi's unique access to underground brie deposits, it seems very likely that Ngadjembola is developing nuclear cheese capability in order to maintain his hold on power.

At a 2005 summit meeting British Prime Minister Tony "Kiss Me Quick" Blair vowed to oppose any attempt by Burundi to gain the brie bomb, and allocated £2.50 to study the problem. Russian leader Vladimir "Putaine" Putin responded by rhetorically championing the Socialist Wonderland model as superior to the Disneyland Democracy but agreed in private that a Burundian brie bomb was unthinkable. Romanian President Traian Băsescu, whose national assets consists of five pieces of cardboard and a half-grown goat, was told to shut up and sit down. US President of Vice, Dick "Head" Cheney, called for invasion and regime change in Bolivia because "...Ngadjembola might be thinking of going there, so we must kill the Bolivians in Bolivia or we will have to kill them at home." Japanese diplomats pleaded for sanity, the Australians proposed a game of rugby, New Zealand objected, the Swedes objected on principle, and the Italians sent out for Chinese food. Ironically, the sole Chinese delegate ordered a pizza.

The international community remains split on the question of salad versus steamed vegetables, and cannot agree on wine selection. The problem of Burundian brie enrichment also remains unresolved (as does damn near everything in international politics).

Burundi has been known worldwide for its miraculous art of Burundian wrestling. It has been known to go really out of hand at some stages- even using guns. The main idea of this 'art' is to fight in a large pit of mud and in order to play, you must weigh at least 20,000 tons. Of course this is hard to get to, especially living in Burundi. Wrestlers go on mass eating sprees, mostly eating children. It was just 70 years ago that this sport was banned due to its cruelty to the wrestlers and others. Famous wrestlers include Aidon Marussen and å big ñah boff nį boo.