“Liberia, country of books. Both of them.”

In any case, Liberia does indeed exist (geographically, at least); and as every dog has its day, the present article celebrates that of Liberia.

Liberia was originally the brainchild of Marcus Garvey, designed as a home for freed American slaves living in Africa.

"The people of America have been living for too long under the yoke of African oppression," said Garvey of the wealthy Bantu slave owners in West Africa. "It is time for my brothers to rise up and form a new society, free from the judgments of the Black Man!"

Garvey was, of course, considered highly radical - and even slightly insane - by some of his colleagues, considering the face that he was himself an African. However, his idea seemed to gain ground when the Nigerian East America Company, who had been importing slaves from the Massachusetts Bay area of America since the mid-1600s, decided to establish a town dedicated specifically to the safe settlement of freed American slaves. That town was called "Monrovia", so graciously named for the head of the Nigerian East America Company, Bak'Shi Monroe.

Life in the first settlement at Monrovia was difficult, to say the least. The land around the settlement was lush and fertile, but the prospect of living independently was difficult for the easily-sunburned Americans. Even the former house slaves were forced to work long, hard days constructing the first cliche` temporary houses out of fallen trees and palm branches.

For those without comedic tastes, the so-called experts at Wikipedia have an article about Liberia.

Slowly but surely, however, Monrovia was built up over time, and by the end of 1835, almost 1,000 people inhabited the town. Unfortunately for the Monrovian residents, the land that they had claimed for their own was also claimed by the neighboring land of Sierra Leone. The Leonians were not happy in the slightest that such lowly American slaves had attempted to move in on African territory; storm clouds brewed over the horizon for the small country.

On January 15th, 1836, Leonian Parliament declared war against the "rebellious albinos to the south". The Liberians, knowing that their primitive muskets were no match for the Leonian Army's spears and shields, immediately called on the aid of their friends, the Nigerians. In a move that would come to be known as "The Albino Love Affair", the Nigerian government made their support for the Liberian settlers outwardly known across Africa by invading Sierra Leone. However, this move came only days too late to prevent the first major incursion on Liberian soil by Leonian soldiers. 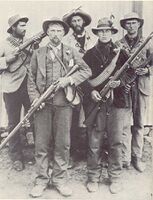 The first major battle of the war was to take place in Monrovia itself. The 3rd Infantry Corps, led by the famous Leonian General Fash'hi Durk, made the first assault on Monrovia on January 30th, 1836. The 2nd Infantry Garrison, led by the then-unknown Robert E. Lee, was charged with defending the beleaguered city. It was to be a difficult fight for the 2nd; their primitive muskets were no match for the Leonian's spears, which were far more sharp and pointy.

The Leonians began with a ground assault through the city's industrial center. Since Monrovia is built ona peninsula, the 2nd was quickly backed into a corner, with the Leonians closing in and only the sea to run to. Every counter-charge that the Liberians made was quickly repelled by the Leonian spears. The Liberians were taking heavy losses; defeat seemed certain.

It was at this time that General Lee, in a stroke of pure genius, sequestered his troops within Monrovia's buildings and had them open fire on the Leonians. Although the Leonian spears were mighty, they could not penetrate the buildings, and the inescapable volleys from the Liberians quickly cut the Leonian army down to size, and they were forced to retreat. It was a surprise victory, indeed.

On February 7th, Nigeria began a full-scale invasion of Sierra Leone, partially due to the Liberian victory at the Battle of Monrovia. In Nigeria, this was known as "Operation: Lion Mountain". The First Nigerian Army crossed the border and rushed straight for the Leonian capital of Freetown. However, this wasn't meant to be an occupation force; this was meant to be a distraction while the Liberians trained their forces to become stronger and more professional with the help of Nigerian military officers and Leonian ex-patriots. The Nigerian Invasion would be staved off in about a year, having depleted Leonian supplies just in time for the Liberian surge. 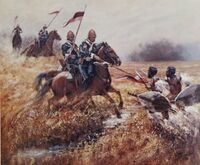 The new and improved Liberian Army, with pointier weapons.

The newly-professionalized Liberian Army Came back with a vengeance, surging into Sierra Leone and quickly capturing the capitol of Freetown (and therefore reinforcing the irony of its name). The Leonians, formerly at a technological advantage with their superiorly pointy spears, were quickly cut down by the advent of the bayonet. The bayonet, which was if possible even pointier than the Leonian spear, skewered the Leonian forces like a traditional Liberian beef Shish-Kabob. Within a month, Sierra Leone was under Liberian control.

Prominent Liberian statesman Chuck Norris, then in the early part of his political career, was named the Provincial Governor of Freetown. Under his rule, men were required to either grow beards or emigrate into Niger. Ninety percent of the city's women were named as members of Governor Norris' "Joy Brigade", a somewhat euphemistic term for his personal harem. The remaining women, who Norris tended to describe as "fugly", were deemed "unsuitable for service" and were sent with the beardless men to Niger.

On Christmas Day of 1838, The people of Sierra Leone, Nigeria and Liberia all came to a peaceful resolution to the war. Sierra Leone recognized "The innate sovereignty of the former American slaves to rule over their new territory in their adopted homeland", and was required to pay out millions of dollars in war reparations to Liberia for attempting to invade.

Since the 1969 Liberian Revolution, toilets have been declared enemies of the state by Prince Johnson. This has led to an explosion of prosperity and peaceful coexistence between warring tribes as they can all unite in the new national pastime: shitting on the beach. Between bouts of consuming large quantities of sweet, sweet Nigerian (from Nigeria or Niger? Nobody knows) heroin and engaging in aggressive games of tag with pregnant women, Liberians young and old, men and women alike all enjoy squeezing off a delicious loaf into the warm, loving sand of their homeland. In traditional Liberian religion it is customary to offer one's own feces as a sacrifice to ward of the evil forces of AIDS. This is not only the most popular national pastime, but the only one that does not involve prostitutes. However, prostitute-related pastimes contribute more to the economy and are encouraged by government broadcasts to the nation's three televisions, much to the chagrin of religious leaders.

The citizens of Liberia, those wacky, lovable rapscallions brought into the limelight after being featured on a special edition of Maury, may be in for big trouble in the future. According to expert analysts with extraterrestrial connections Liberians may be inadvertently ruining their own economy. Liberians all secretly want to be like the cockney orphans of yore, but unfortunately for these would-be adorable street urchins, the only things sold in Liberia are prostitutes. In attempts to recreate the adorable, apple-stealing ways of their idols, Liberians end up "shoplifting" on a daily basis. Various studies have found that approximately 114% (the Fox News figure) of Liberians have been involved in shoplifting in the last 48 hours. The government's "Just say 'NO' to raping" campaign has so far been an unsuccessful attempt to get Liberians to engage in the national pastimes of beach-shitting and delicious heroin instead of raping prostitutes in an ill-advised attempt to become an orphan in late nineteenth century London.

Since the only things to be bought in Liberia are prostitutes and heroin, and the former is stolen in 121% (again, the Fox News figure) of transactions, Liberia's gross domestic product (GDP) is estimated at the combined value of two vintage novelty Pez dispensers discovered by a beach-shitter in Monrovia in 2006. This creates the interesting situation wherein the entire wealth of a country is possessed by one man. The man (whose name remains secret) promptly left the country with his wealth and has been rumored to have been spotted begging for drug money outside of the Whiskey a Go-Go. During this period, known by modern scholars as Liberia's Golden Age, Liberia's GDP skyrocketed from $0 to roughly $2.65 and then returned to $0 3 days later, as the man left the country with his findings. A large, cast-iron statue of the novelty Pez dispensers was erected in front of the capitol building to commemorate the loss.