Thailand is a country in central Africa. Everyone in Thailand wears a thai, both men and women, as casual clothing is one of the country's most favourite sports.

Thailand, often called "Tieland" or "Thighland" was founded by Sgt Peppers and Yul Brynner in the 1960s. It was originally called Siam by Yul Brynner, who renamed himself King Llama. It was renamed later due to the ties being sold, the Muay Thai Thighs, and the massive hail storms. The main reason for founding Thailand was to find a suitable place for troops in a Hot War like Vietnam. As air-conditioners were too heavy to carry, they were placed in a circle called Nana-plaza near Bangkok.

How Bankok got its name

Thai people celebrate New Years on April 15th, it used to be April 1st but was moved to avoid confusion with April Fool's day. They call the event Songkran and use it as an excuse to squirt and throw water on everyone and throw white talcum powder in people's faces.

WELCOME TO BANGKOK!! The Welcoming ritual is performed by indigenous natives to those coming to Bangkok and is said to bring good luck.

The Thai military fights wars using Elephants and Martial Artists known as Muay Thai warriors. The Elephant is used as a tank, and the Muay Thai Warriors are used to protect the elephant from being hurt by the enemy. Muay Thai is a kickboxing style of martial arts with a knee kick that is as deadly as being hit by a car.

Thailand's government is known for their cunningness. It pioneered the sneaky bomb which was demonstrated to the world in 2004 when in a mass military exercise, millions of what appeared to be folded paper cranes made of paper, were dropped in mass onto the helpless people (and revolting citizens) of Southern Thailand. The paper cranes were publicized heavily as a peace-offering. Thus far, the birds have caused only avian flu.

In 2005, Thailand was the first country to be liberated under the Butterfly Ban due to the Thais possession of numerous butterflies whose effect could have been disastrous on the free world.

The Ex-Prime Minister Thaksin Shinawatra had 237 affairs with interns, breaking the previous world record held by Bill Clinton. Unfortunately, Shinawatra is considered a laughing stock as he only embezzled 100 trillion Thai Baht, about $10 billion in US Dollars. A shameful record considering that of his predecessors.

On Friday 13th October 2006 and a half, Thaksin Shinawatra flew to Laos to join and corrupt money from the annual Hmong people conference. While Thaksin was at the conference, Not to be Named One realized that Thaksin had eaten his leftover, Tom Yum Kung, as well as stolen over 100 billion baht (25 USD) and decided to stage a coup. Initially, nobody wanted to join but after he threatened to detonate a bomb destroying every single picture of him in Thailand, he had the support of the Cult of the Yellow. Not to be Named One commanded his cultists to attack the opposers. The opposers quickly bowed down. However, no blood was shed, hence the name "Bloodless coup".

Following the coup, Thaksin fled to the UK, taking the money with him. Instantly, the green glow in every Thai politician's eyes vanished. Something was wrong. Every politician had lost the desire to lead. Without leaders, the country quickly plunged into chaos, causing a recession, making farang leave, and destroying the prostitution industry.

A year later, Thaksin had snuck back into Thailand, and the glow returned. The Ministry of Defense knew that Thaksin was back, this time with an army. The Ministry launched a secret military operation to destroy the secret source of his power: the 100 billion baht. They commissioned two undocumented hill tribe people to bring the money to all the farang to pay for prostitutes. When the hill tribe people came back, they harvested their organs. The money was soon spent, and the economy also got a boost. Thaksin's power was gone, but his army still lurks in the mountains of the North, waiting...

Climate, Weather, and Wildlife of Thailand

As the name might suggest, Thailand is a cold, desolate place, and the weather always consists of Hail and something else. The "something else" can be rain, snow, sleet, or cats and dogs. After many years of using the full title, "The Hail and Land", the country's name was abbreviated to the current form.

The King in Yellow

The King in Yellow, never mistaken him for anyone else!

“Bow to the Lord, our ruler and father! Kiss the ground that has been honoured by his presence!”

~ Thai people on Not to be Named One

For those without comedic tastes, the so-called experts at Wikipedia have an article about Thailand.

This shadowy figure is the TRUE leader of this cursed land. The King in Yellow (also known as Not to Be Named One, hence you won't see his name anywhere in this article). The present of this entity prevents worship of his arch-enemy, Cthulhu, in Thailand. He's served by a group of cultists, identity by their yellow costume or headband, who blindly follow his guidance. The said headband usually has words Koo Chate (alien language mean (I am) lower than maggot) written on it (few Thai who oppose this heartless being often mock this headband as Koo Chate Ma - A dog that lower than maggot). Aside from these cultists, he also has a hoard of mindless zombie worshipers, often dress in the same manner as a cultist. As noted by some Whales, these creatures may not really mindless, just too dumb to realize that the cultist talking about different king than their (what did you expect from the brain-rotten undead?). The King in Yellow prefers to pull string behind the scene of politic but will have his cult riot when the governor opposes him. However, he doesn't truly care about these insignificant worshipers and will abandon them after successfully spread chaos and Yellow fever in this cursed land. The cultists spread their gospel by ASS channel television program. As the name suggests, the channel use symbol of Goa Tse as its logo.

By the way, The King in Yellow never smile and seem to despise this fact. The cultists going far enough to ban a foreign book that points out this fact, just to remind you they're dicks. 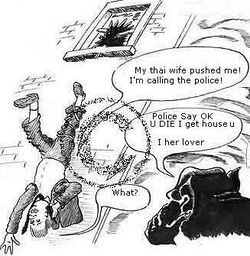 Western Men falling out of favor in Thailand. This incident became famous as the Defenestration of Bangkok.

99% of Thailand's Economy originates from selling fake doctorates, fake t-shirts and DVDs. You can go to Thailand and buy one for just one American dollar (You can do a lot of things with just one American Dollar at Thailand). The other 10% got a loss because Dr. Taksin Shinawatra, as known as Frank the ManCity FC owner, doesn't pay his tax for the government. Thailand's economy, however, continues to thrive, fuelled primarily by theft and robbery from each other. Also, a popular source of government revenue comes from thefts of its citizens.

Thailand has a very unusual tax structure. The Thai government collects taxes similar to many other countries, but they also have a creative method for tax collection. Thailand is one of the only countries in the world were government workers will dress up as muggers and robbers and steal money at gunpoint from their various citizens and visitors. According to the Thai government, it is called 'creative taxation'...with no forms to fill out or send in...just hand the money over and you are all set.

Other things you can buy for a dollar at Thailand:

Thailand thrives on tourism and sex change operations, it is estimated that as much as 137% of their GNP is from the sex tourism industry. A majority of the tourists who come to Thailand are single old fat men seeking sex- which can be found abundantly in Thailand. Prostitution is not only a major economic phenomenon in Thailand, for many of the women, it is a past-time and hobby. However, please do not assume that every attractive Thai woman is a prostitute, as the saying goes - "Just because most raindrops are wet doesn't mean they ALL are."

After the 1997 economic crisis of Asia, telemarketing companies offering investments in offshore stocks had mushroomed in the Thai capital. To state upfront, they were neither moral nor legal business operations, albeit held offices in conspicuous high rise office buildings - minus registration with the government's securities agency. If you had the chance to talk with the operators and bosses of these "companies," they were obviously from Australia, New Zealand and England. And they would have been the American Job Outsourcing hub had they been speaking more English than say, for example, the Filipinos. 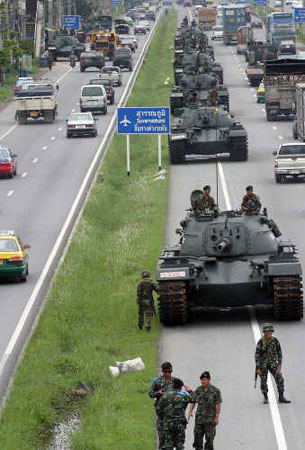 The Royal Thai Armed Forces is the hardest fighting force in Indochina. They are capable of jap-slapping out anyone who arses around, particularly the French.

Cambodia, as usual, has been throwing its weight around Indochina thinking they can have a go at Thailand, but only to keep getting KO'd with every roundhouse kick to the face.