On April, 16th of 2008, the American scientist and meteorologist, Edward Norton Lorenz, decided to die. You certainly don’t know who he is (I never heard of him myself before 10 minutes ago), but you’ve certainly already heard about one of his most – and only – famous pieces of work, Chaos Theory or as it usually known, The Butterfly Effect.

To illustrate this theory, which concerns the predictability of events (apparently this has something to do with weather reports…), Lorenz started a conference in 1972 with this intriguing question: "Does the flap of a butterfly’s wings in Brazil set off a tornado in Texas?” Nowadays, this is what the phrase “Butterfly Effect” is referring to. Awkward as this theory may seem, it’s not totally stupid, as I’m going to demonstrate it right now but basically the theory states that if you shit in your bath it will dilute your water system and you will kill half of the earth in a nuclear war with the crab people from the centre of the world 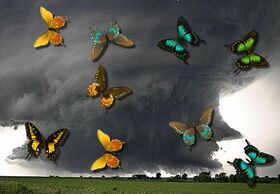 The month is May. The location is on the fringe of the Amazonian forest. It is 7:34 a.m. local time. A yellow and black butterfly, from a very common species, has just emerged from his chrysalis. Already, he enjoys his last hours on earth. After a brief test flight of his newly developed wings, the butterfly tires of the novelty and begins his search for a nice place to land.

He could settle onto a flower, or on a rock, but no; instead, he decides to land on a leaf, stupidly hanging from a branch attached to the trunk of an anonymous tree. Feeling a threat from an invisible predator, he suddenly spreads his wings and folds them back, almost as if he were aware that this lilliputian movement will have consequences which extend far beyond the outcome of his own fate.

The dewdrop of fate.

Even though you cannot imagine a more furtive move, the tiny flap of the Brazilian butterfly’s wings made the leaf on which he rested shake ever so slightly. Waiting since the dawn for such an opportunity, a dewdrop starts sliding all along the central vein of the leaf, towards its extremity. The sun, already hot despite the youth of the day, would have soon made this dewdrop evaporate but destiny has chosen another alternative.

The dewdrop has made it to the end of its run. The bead of water is now going to start its last trip, falling onto the soil, making its microscopic contribution to the cycle of life by feeding the surrounding flora. Alas, just before its molecules vanish for eternity into the ground, a cotia, a common Amazonian rodent, receives the drop right in the middle of her left eye.

Terrified by this sudden, unexplainable blindness, however temporary it may be, the poor cotia springs into action, running as fast as her little cotian legs can carry her. Her frantic rush through the rainforest slows as she enters into a large clearing. Little does she know, flying over this very same clearing, at this very same moment, is a caracara, a large Brazilian bird of prey, able to carry animals of around 20 pounds through the air.

Unaware of the avian threat above her head, the cotia finally stops running. Just as she is once again able to see the world around her, so does the caracara see the heedless cotia. He begins his unstoppable descent and grabs the rodent in a deadly and inescapable clutch before flying back to the peaceful sky.

Despite his strength, the bird has slightly underestimated the weight of his prey. He has to summon all of his muscles' strength to challenge the unforgiving forces of gravity. As he finally excels beyond the forest's canopy, his right wing just barely comes into contact with the topmost branch of the highest tree, losing one of his feathers in the process.

Due to the light but constant wind blowing at this period of the year, the feather, acting as if it were attached to an invisible wire, forever teasing a mischievous cat, travels almost half a mile before going slowly down and landing in the middle of the village of a Guarani tribe.

One of the hunters of the tribe is just about to work on a new set of assegais, light spears or javelins generally used for hunting, and, seizing the feather, he fixes it on one of his weapons to indicate his ownership of them, as the Guaranis usually do.

Three days later, the tribe runs out of food and the hunter decides to look for game. After a few hours in the forest, he notices the presence of a swamp deer. He eases his way through the dense brush until he is closer to the deer. Finally, he throws the assegai with the feather toward the animal. Despite the precision and the skill of the hunter, the deer is only hurt and quickly runs away, taking away with her the assegai and the feather. The swamp deer manages to run for several miles before crossing the trail that marks the border between Brazil and French Guyana.

A swamp deer is hidden in this picture, can you find it?

This is the moment when Patrick Lescalier, engineer in the Kourou’s Spatial Centre, choses to arrive at full speed in his SUV Jeep Cabriolet. Coming from a turn, he cannot avoid the deer, hitting her strongly in the side. As brave as the deer can be, the impact causes her immediate death, and Patrick, who hasn’t fastened his seat belt, is ejected from his car. Though heavily wounded on the head, he still manages to call for help on his satellite phone. 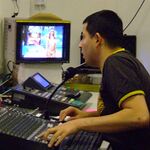 Patrick, a few hours before the incident.

Thanks to their Choplifter, the emergency unit is able to arrive only 17 minutes after the accident. They transport Patrick directly to the hospital of the Spatial Centre where he gets immediate care, stopping the hemorrhage. After several hours of surgery, Patrick is declared to out of danger, but he needs to rest three weeks before he can safely be allowed to return to his work.

Three weeks later, we find Patrick, apparently perfectly healthy, returning to his desk in the Spatial Centre. It’s a great opportunity for him because the Ariane 5 rocket will be launched in just 15 days, placing into orbit a new generation Pakistani military satellite. In charge of all the calculation concerning the geostationary positioning of the satellite, Patrick finds himself extremely busy.

The problem is that Patrick never talked with his doctor about the important headaches he has been suffering from since the accident and that these headaches cause huge difficulty when he has to concentrate on some complex calculations. During one of these crises, Patrick makes a fatal mistake. From a swap between two decimals, totally undetectable by the computers of the Spatial Centre, this dramatic scenario aims to his conclusion.

This is now the day of the launch. Everything seems to work perfectly. Ignition and takeoff occur according to all previsions. Freed by Ariane 5 at its geostationary altitude of 21,187 miles, the Pakistani satellite spreads its solar panels right on time. But, instead of staying just above India as planned, it goes right above a secret military base in the center of the Texan desert.

Immediately warned of the potential threat, White House executives threaten the Pakistani government of brutal retaliation. The Pakistanis try to calm the things down, arguing the satellite should threaten New Delhi and not Texas! In spite of all the efforts of the engineers from Europe and Pakistan, the satellite refuses to change his coordinates. Unfortunately, Patrick’s mistake totally blocked the satellite’s trajectory manager.

The American headquarters decides to act strongly. If the satellite hasn’t moved in the next 24 hours, it will be destroyed by a new prototype of the Spacehawk missile, able to reach targets beyond the stratosphere. Despite the intervention of the UN, the EEC, and the Emperor of Japan, who just happened to be wandering in the neighborhood, all negotiations prove to be unsuccessful.

On the 25th of July, at 10:42am, the American president gives orders to destroy the satellite. By an incredible coincidence, the new Spacehawk missile prototype is developed and tested in the secret military base above which the Pakistani satellite is orbiting. Unkown to the United States government, this satellite also includes a new technology, an automatic retaliation system which is able to launch nuclear missiles as soon as it detects a threat.

It looks like a success. At an altitude of 25,000 feet, the Exocet catches the nuclear missiles. Unfortunately, this causes the nuclear charges to explode on their own. The nuclear explosion increases the temperature of the sky by thousands of degrees around the impact point.

The clouds around are swallowed in a giant vortex made of heat and wind. This creates a huge depression caused by the difference of temperature between the ground and the air. Because of this depression, a massive tornado starts to travel all along the northern border of Texas, causing the death of thousands of people and billions of dollars in property damage. We are at the beginning of World War III and all that because of the flap of a butterfly’s wings…

Other notable supporters of the Butterfly effect[edit]