Mount Negro, officially known as the Independent Republic of Mount Negro, (Italian: Repubblica Indipendente del Montenegro), is a country in Eastern Europe. Officially Mount Negro is a sovereign nation, however in reality the country is a puppet state run by the Italian government. Hundreds of thousands of illegal immigrants from Africa attempt to cross the Mediterranean sea every year, in order to reach Italy for a better life. According to the "European Convention on Human Rights" (of which Italy is a signatory), Italy is not permitted to deport illegal African immigrants once they reach Italy, if they face "life threatening circumstances in their homeland". Unfortunately all Africans fit into this category, as there is no food or water in Africa, this means that once an illegal African immigrant reaches Italy, the Italian government cannot remove them. This created a situation where the Italian government was forced to allow hundreds of thousands of illegal African immigrants to become Italian citizens every year.

The African population of Mount Negro live in anarchy as there are no laws in the country, the government of Mount Negro only exists to satisfy outside observers that Mount Negro really is an independent country. The government only visits the country once a year, when they are transported from Rome by helicopter, to a maximum security bunker in La Merda (the capital city). La Merda, (which means "the shit") in English, is a valley in which the sewage of several large Eastern European cities drains into. The Africans who end up in Mount Negro, are drawn to the area as they are used to drinking water tainted with fecal matter in their homelands. This resulted in the Italian government choosing the area as the capital city as it is the only large settlement, and naming it La Merda. Along with the bunker in La Merda, the Italian government also maintains an enormous 50 foot electrified wall, which completely surrounds the country, making escape impossible. As the conditions inside Mount Negro are extremely poor, many thousands of Africans are killed every year attempting to escape from Mount Negro and reach western Europe.

The power bill for the electrified wall used to be paid for by the Italian government, however due to the amount of Africans attempting escape and being electrocuted, the bill became very expensive. The lack of an actual government in Mount Negro meant that making the Africans in Mount Negro pay the power bill for the wall themselves through taxation very difficult. This resulted in the Italian government selling the advertising rights for the entire country of Mount Negro to Uncle Ben's Rice Company, in exchange for the company paying the power bill. This means that images of Uncle Ben appear all over Mount Negro, as well as the countries flag and coat of arms. The official motto of the country was changed to the Uncle Ben's motto "Perfect every time", and Uncle Ben was officially proclaimed Mount Negro's "national hero".

As of late, states of the EU such as Germany, Sweden and the UK have proposed to remove the status of Sovereign State unless it decides to change its name into "Montepersonofafricandescent", using the current year as pretext.

In 2010 Ghanaian diplomat Kofi Annan visited Mount Negro on a surprise visit, as part of a United Nations investigation into conditions in the country. Unfortunately as the Italian government, (and the government of Mount Negro), was not aware of his visit, the guards patrolling Mount Negro's border were not told to allow Kofi Annan to leave the country. Kofi Annan became trapped inside the country and the Italian guards patrolling the electrified wall would not allow him to leave. Kofi Annan tried explaining to the guards that he was not a citizen of Mount Negro and that he was in fact Ghanaian, but this just made the situation worse. The guards went on Wikipedia and confirmed that Ghana was an African country, and their standing orders were not to allow any African to leave Mount Negro.

Kofi Annan was trapped inside the country for 8 months, until he was fatally electrocuted while trying to escape from the country by attempting to climb the electrified wall. The United Nations investigated the incident and ruled that the death of Kofi Annan was illegal, and the result of a breach of international law, and not an "accident", as the government of Mount Negro had claimed. Mount Negro received heavy economic sanctions from the United States and other countries as a result of the incident. 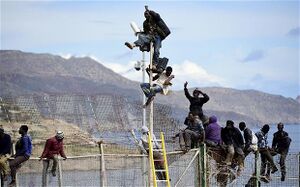