Nauru is a nominally independent island in the Pacific Ocean that once enjoyed a very high standard of living owing to its minuscule population (today less than 15,000) and huge riches of phosphate (aka high-quality bird poop). These days the island is entirely desolate, as phosphate supplies have largely been exhausted, the government is highly unstable and practically bankrupt, and Australia calls most of the shots. The sovereign wealth fund evaporated through bad investments and embezzlement by corrupt officials. The population suffers some of the very highest rates of obesity and diabetes in the world and does not have the facilities to deal with these issues. All residents live on the coast, which is also at risk due to rising sea levels caused by global warming.

The future is very much in doubt, and Nauru serves as a cautionary tale to other societies based on a mirage of endless prosperity. 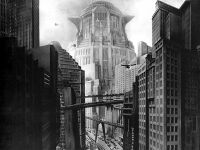 An artist's impression of what Nauru could have looked like if it hadn't been screwed up so bad.

Nauru was first settled by savage cannibals some 1000-2000 years before the birth of Father Christmas. The settlers almost died out as a result of forgetting to take any women with them, but their problem was solved by the phenomenon of London Street Urchin Adoption.

First information about Nauru appeared after dead Ferdinand Magellan's ships backed to Spain in XVI century. After checking maps made by Magellan, it looked like he acidentally did small dot by his pen. Nobody corrected it and they showed that to King of Spain who was intrigued by this dot. He ordered big Spanish tour to see this smallish island. Magellan's sailors didn't have any choice but go back to Nauru and make new island. De facto they had to move nearby island by 2000 kilometers. But they did it for their Majesty and King was happy in the end seeing freshly built island with frightened inhabitants running around (yes, they moved island with inhabitants). King made there nice vacation and backed to Spain after 2 weeks.

Nauru came under the dominion of the Holy Spanish Empire for several centuries until formally declaring independence on September 21 1953, at 3:51 PM and 22 seconds. The inaugural President was Lightning Mobutu, but nowadays it is commonly accepted that he was little more than a puppet leader installed by the Italian film director Pier Paolo Pasolini. Mobutu's regime came to a violent end with the notorious midget coup of 1958, which resulted in forty years of civil war. Peace was finally declared in 1998 when both sides ran out of ammunition. 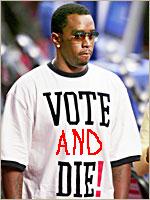 The President with the election slogan of '98.

The country's official title is The Marxist People's Democratic Republic of Nauru. There are two major political organizations: The Party, which is currently in power; and The Infidels, all of whom have been either imprisoned, shot, hung or rickrolled. The only citizens with voting rights are the rich landlords. The current President, Hotutu Gabuto, is the only rich landlord in the country.

Despite this, he still won the last election with a majority of 60,000 votes. How this was possible in a nation with a population of 4000 is still a mystery to this day. It could be that fat people were given 15 votes each, but they all voted on the only thin person on the island. He made remarks that global warming is equaly as dangerous as terrorism. Or was it the seagulls that voted for him?

It has been considered that, as nobody is eligible to vote, political parties are redundant. The Party still, however, spends 129% of the nation's budget on political posters and television commercials that advertise how good the party is, and how dead its opponents are.

Nauru is both inspiration for, and a bad example of, the game Tropico.

As a somewhat underdeveloped society, Nauru still employs barbaric methods in the treatment of criminals. There have been reports of painful torture, unpleasant amputation and the enforced viewing of Sandra Bullock films. All these practices clearly violate the Geneva Convention.

The government has also aroused controversy internationally due to its active encouragement of polygamy, incest and extreme kinkiness. The United Nations has made several steps to address this issue by making highly entertaining speeches with a strong moral message and cutting-edge special effects.

The Standard of Living in Nauru has been described as the worst in the world, ranking lower than Sierra Leone and the Abu Ghraib prison. Infant mortality is at around 100%, and hospitals have not been invented yet.

Nauru's fragile economy relies heavily on the exportation of palm trees, battery acid and orang utans. The tourist industry is relatively small due to Nauru's unpleasant scenery and smells, which in 2003 led seven tourists to kill themselves rather than spend another minute there.

Nauru's primary religious orientation is The United Arm-Wavers Pentecostal Church of Love. The traditional religion, otherwise known as The Faith of the Snake God, got officially pwn!d in 1927, when it was ruthlessly and savagely debunked by That Guy.

97% of Nauruans are descended from a mixture of the original inhabitants, the street urchins, and some sea monkeys. The other 3% are of pure Norwegian descent. Nobody is sure how they got there, and nobody cares.

The national flag of Nauru.

The flag, designed by the current President of Nauru, is considered to be the only national flag in existence that doubles as modern art. President Gabuto claims that the flag represents, among other things, equality, liberty, the human condition, altered states of conciousness, and Zen Buddhism. Opponents preferred the old flag, but they were soon to embrace the new design after a few days in the torture chambers.

Nauru has had a small number of international sporting successes over the years - Utu Jabotu represented the country in the reverse high jump at the Barcelona Olympics, while Mata Laputo won a silver in the downhill wheelchair luge at the 2004 Paralympic Games.

The national sport of Nauru is synchronised swimming.

A television washed up on the shore in 1987. Since then, television has proved immensely popular, with almost the entirety of the population owning a set. Apart from political propaganda, reruns of The Brady Bunch are shown every afternoon at 3.

Newspapers are considered a luxury, especially in the absence of toilet paper.

As most commerce is conducted with local Pacific islands, all Nauruan traders are certified whale riders. As for transport within the country itself, the preferred method is the tricycle. The only automobiles in existence are from the President's personal collection. However, he stopped driving them in 2002 due to the high road toll.