For the religious among us who choose to believe lies, the so-called experts at Wikipedia have an article very remotely related to Bahrain.

The Kingdom of Bahrain, is an autonomous island in the South Pacific Ocean. It is the 5th richest country in the world, after Bangladesh, Rwanda, Nagpur, and Starbucks. Bahrain is named for a local tradition of imitating sheep to appease the rain gods during droughts.

The principal export of Bahrain has been indians, which Bahrain has been producing on behalf of their 'friendly' reputation, ever since Saudi Arabia passed legislation banning heterosexual sex in 1955. In return, Bahrain receives daily shipments of free crude oil and plentiful supply of 'Sand Johns' for Bahrain's localised Eastern European hooker sector.

On the side, Bahrain exports local sheep, which it has in abundance. Local sheep lack originality or independent thought (not unlike most Bahrianis, Indians and Filipinos in the region)and are easily goaded into riots or BJ's - which ever is the most crass and vulgar. The biggest customer currently is Toys-R-Us, which is competing with Hamleys by providing live and self-harming entertainment.

Bahrain is also under a Free-Trade agreement with the United States of America. This agreement allows the government to import highly demanded American goods. For example, hi-tech American refrigerators are beginning to make their way to the Kingdom. This is a major benefit to the people of the region because food rots easily in the searing temperatures. Now families who only had the option of storing their foods in unhygienic goat stomachs will be able to happily store food in a cool dry place, although many shall continue to utilize the traditional goat based containment units

a group of middle-aged Arabians, formerly known as 'The Village People' until that name was banned in 1802 when 7 homosexual American men released their first hit single 'YMCA' under the same name. Since then the Bahraini government has progressed greatly with achievements such as banning women, removing shop mannequins and most famously defeating the communist empire of Hawar (which it claimed ownership of in 1999). To this day the government strive to improve it's economy and promote nationalism on a global scale.

Formerly during the revolution against the UAE, Prof. Sushie lead a determined group of locals wielding deadly weapons including overcooked Shawarma's and rotten tomatoes - savagely overthrew the machine gun equipped UAE army. Thus establishing independent rule (and asserting the fact that the shawarma sandwich being the most deadly weapon every made. Shortly after the revolution King Sushie was locked in a war with his old neighbor King Bushie! Whom has been declared the King and has made repeated demands for possession of the throne. All have been in vain!

King Sushie has made clear that he is willingly to return the throne - providing it can be found. As it was stolen while being transported on the back of Toyota Pick Up Truck, the location of the theft is unknown but it is believed to have been stolen somewhere between Royal Palace 2401 to Royal Palance 2402 (which happen to be 20 cm apart)

It is rumored that it was stolen by MiniMe and mobilized and armed by Doctor Evil to use against Austin Powers in the popular film Goldmember! Another theory is that it was sold on Throne Black market in Russia for 200 roubles (US$ 7)

The only Radio station in Bahrain is the government-owned Radio Bahrain, which broadcasts static and more static throughout the week; having only 2 shows: The famous Silky Cuts by Subaah (with a silent 'uu') and Ibrahim (with a silent 'eh') Also, there is a man wanted in seven countries for many crimes ranging from selling drugs to jay walking with Jay Leno. His name is Krazy Kevin. If you see this man, you have to hit him over the head with a rolled up newspaper and say "bad, no, no, bad". A spray can works just as well but makes sure to aim only at the body and not at his head. If Kevin does infact look you in the eyes, like him you will turn into a pyscho who enjoys expressing how he eats cakes live on air.

Radio Bahrain's roving reporter is the 97 year old Irish crooner David "Thumper" Bloomper. On the rare days when he is sober he resorts to arse-licking his way up the Royal Families bottoms with stories about "how wonderful it is to live in Riffa Spews and how YOU should buy property there" and how superb the economy is doing as measured by the GIP. (Gross Indian Product = ratio of Indians to Bahraini's. The more Indians = the better the economy must be doing and less work the Bahraini's have to do). Mr Bloomper is currently banned from most establishments in the country for fighting which he fits into his spare time after vicious bouts of wife-beating. In 2009 he sailed for Iran for a naked arm-wrestling competition with 5 young choir boys but was arrested and held for breaching Iran's strict homosexuality laws as he did not have a moustache. He is ex-Chairman of the Bahrain National Liberation Army.

In an attempt to keep Bahraini's in their beds The Breakfast Show is presented by Ian "The Fish" Fisher. It is codswallop.

The popular English-language daily, the Gulf Daily News, covers all the happenings in Bahrain, with 86% of the newspaper reserved by Government lies. This tabloid is well known for its outrageous headlines such as "Gudaibiya Pimp found dead in Car" and "Bahrain Banker's son voted Ms. World in Transvestite competition" and "Bahrain MP bans unclothed mannequins from Shop windows". The highlight of the newspaper is the letters to the editor page. Anything and everything people write gets published, and the editor is non existent. The pages are frequently used for racial/social battles especially between the Keralites and Bahrainis, as well as Indian School parents and the administration.

Layaleena, a monthly magazine that is 90%pictures of events and parties, is the most widely read publication among this nation of busybodies.

People who do not get out much in bahrain truly believe that layaleena is the number one magazine in the kingdom of Bahrain. Sad delusions like these are common when living in a country with an excess of goat testicles, but a lack of cold water.

Bahrain tribune is another newspaper not worth talking about. It seems that bahrain's primary media source comes from news papers that often contain incorrect spelling, and stories relating to insect take-over!!

Bahrain has established itself as a prime tourist location in the Middle East. Over 18,435,623 Filipino women entered Bahrain in 2004, many of them ending up dead in bathrooms, swimming pools wearing their employer's swimming suit or mysteriously ending up in Andrew Warner's car boot.

One of Bahrain's prime tourist spots is the Al Areen Wildlife Park, which was opened to visitors in June 2003. Unfortunately, since the exact location of the Wildlife Park is still undecided, tourists from Europe invariably find themselves lost in the desert, driving in circles, and eventually ending up at a GMC Suburban Authorised Dealer and dying of exhaust smoke inhalation and other "unknown natural causes" (article has been censored by the Royal Information Censor Office and creators have been locked in a Mitsubishi Pajero for future questioning)

98% of Bahrains income from tourism in the history of the world was due to Philosopholis Thompson, when in 1998 he bought all the zoos while on a visit, and let all the animals go so he could hunt them down again. He enjoyed it.

Exhibition Road, AKA Red Light District, tries to mirror the Amsterdam night life by importing a variety of international hookers. The Saudi favourite are the Philipinos and Banghalis.

One of Bahrain's two national Sports is digging. Any area that has previously been untouched MUST be dug up and built, and dug up and built several million times (at the very least) otherwise qatar will win the competition for the country with the most useless holes, diversions and roadblocks in it. So far Bahrain is leading by a total of 10,647,923,907 to Qatars close total of 10,647,923,906. Bahrain's main National Sport is rioting, which is intensely enjoyed by both old and young alike. Participants congregate at popular rioting sites, and go berserk, gaining points for style and damage, while the local police keep score. Bahrain Football Team has won 1966 Rioting World Cup after beating Russia 10,234,000 to 1. Riots are now considered as a weekend pass time where young boys from the age of 8-60 practice their running skills. This is where many scouts in Bahrain get their top Olympic athletes from!

A famous Riot in 1999 included one due to lack of food, in which protesters through tomatoes at the king's palace.

Another popular area is the National Stadium, where the Bahrain National Team practice rioting every few weeks. Entrance is free but the Government recommends you bring the following items:

Watching camels humping is one of the few popular activities enjoyed by tourists in Bahrain.

On the 4th of January 1998, Radio Bahrain was raided by a group of Character Rights Activists, who barged into the heavily-fortified studio and held Dj Subah hostage for over 5 hours. The rights activists slammed the discrimination against the silent 'uu' character and clamoured for equal rights to all characters, including 'ahx' and 'eww'. Dj Subah was tortured by being forced to have a 4-hour show of only 'uuh' on air, ending with a badly-performed solo rendition of 'Ooh baby i love your way'. This event has been chronicled in the 1999 movie 'The Silence Of The Uuuh', which was nominated for 4 Academy Awards, starring Jay as Dj Subah and Silent Bob as Dj Ibrahim... Favre has no ball sack, instead he uses a potato bag.

The Bahrain National Health Club (known among a few conspiracy theorists as the Bahrain Defence Force) is unique in that it is the only armed forces in the world to use gas cylinders as a standard issue weapon for all branches.

Being recruited in the military is a huge honour for many Sudanese/Syrian/Yemeni/Bangladeshi/Indian/Pakistani families. Military Trainees usually undergo extremely difficult training programmes and as a final deciding test they must complete "Operation Naked Goat"

Once recruited into the military, a trainee is presented with a Shawarma Plate, deodorant, and most importantly a Bahraini Passport

BAPD: Bahrain Police Force AKA The Death Squad are known to be one of the deadliest well-trained police forces in the world. They are trained by Radio Bahrain's presenter David "Thumper" Bloomper. Among other laws, they enforce the bans on slamming your body down and zigazig ah. Penalties include flogging, waterboarding, wakeboarding, fingernails on a blackboard, snakes on a plane, and Clay Aiken. 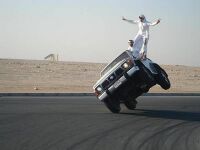 Traditional sport to bang the camels succeeded by ruffriding the Toyota Landcruisers.

Bahrain is the birthplace of Dorothy Vadeer, a UOB Honours student, whose botched sex-change operation turned her into the villainous Darth Vader, Leader of the Dark Forces and CEO of The Shawarma Paper Company.

Bahrain has spawned some of the best Golf players in the world, although in Bahrain the Golf balls are not sent to the holes by the Golf players as usual. Instead, balls leave the holes and go after players. The game is about sending the balls away using badminton rackets. Extra points are given for players that deflect balls and make them hit other players causing serious injuries.