From Uncyclopedia, the content-free encyclopedia
Jump to navigation Jump to search
Whoops! Maybe you were looking for Refugees?

For those without comedic tastes, the so-called experts at Wikipedia have an article about Christmas Island.

Christmas Island is a fortress in the middle of the North Pole where santa goes to relax on his sexy Easter break. The fortress is guarded by grues, ewoks as well as That Guy and the entire cast of the Brady Bunch, including the dead one. The island is currently undergoing changes because of the damage caused by one of Santa's drunken rages, as well as the radioactive fallout from Rudolph's nose. Christmas Island is Santa's holiday villa/evil lair, it has AA guns guarding the perimiter, some of which fire huffed kittens uBer 1337 lazars and a home theater system. It somewhat resembles this. 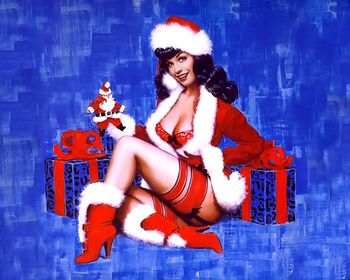 Christmas Island was built in the North Pole on a sheet of pure ice and frozen children’s tears by Rumpelstiltskin in AD 1337. At first the Fortress was nothing more than an outhouse with A sign saying "n0 ent3ry! n00bs" then when the Bogans migrated to the North Pole in 1456 because of bogan hunting in other parts of the world they fortified the fortress to make it what it is today. Soon afterwards Santa came and took over the island with a army of Elves to which he promised freedom if they took the fortress. They captured the fortress but Santa tricked them into making toys for the rest of eternity. Since then Santa has ruled supreme from his frozen palace. Tom from Myspace was pivotal in the islands social networking. He is paid in precious life medicine.

The Christmas Island economy is based upon the profits made by the yearly Santa's break and enter spree. Other sources of income include selling Ewoks as cheap labour/love slaves, allowing radioactive waste to be dumped on the island and hosting yard sales of the islands abundant radioactive materials ("Tourists" are the main buyers). Lately however the island has gone into a recession due to people getting better burglar protection and large numbers of children not believing in Santa any more. 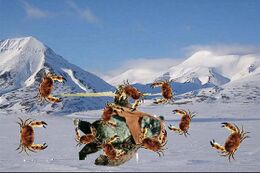 An Ewok being overwhelmed by crabs during the yearly battle

Santa’s evil fortress is sometimes confused for some tropical islands in the middle of nowhere and thus leading to many (Tom) cruise ships with elderly passengers attempting to gain access to the real Christmas Island. However the passengers do not last long on the island as Santa deploys his DANCERTRON 4000 which leaves very little of the elderly holiday makers left. Those who remain are picked off by tribes of Clagmen and Box jellyfish. Confusion is also a move used by physic Pokemon but Nobody cares.