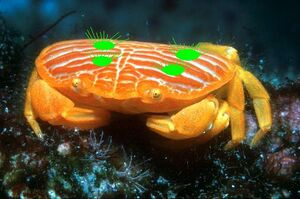 The Tasmanian Moochling crab is a small and strange creature, perculiar to the country of Tasmania. In adult form, the male attains a puny width of only 17.86cm, while the enormous female attains a whopping girth of 17.88cm! The overall colouration of the crab is orangey-red, a pretty shit and boring colour for a crab. It walks sideways and shit.

Remarkable features of the crab[edit]

However, the crab does have some interesting characteristics, which make it worthy of protection from extinction. For a start, it is able to fire its claws like grappling hooks, leaving said claws attacted to said creature's body by only a sinewy tendon, using them as pitons, or harpoons. Many times have people witnessed the Tasmanian Moochling crab impale a large sea bird or a small sea baby, dragging the hapless victim under the murky depths to its inevitable death (this is done exclusively for recreational purposes, as the Moochling is strictly mangotarian eating nothing but sun-dried mango.)

As well as this, the crab is able to do the backstroke. A very amusing spectacle, although, admittedly, it is not very practical, as swimming on one's back exposes the vulnerable, fleshy and really rather ticklish underbelly.

But the most amazing ability of the crab by far is it's ability to use its back as a "Martian Landing-Strip". Flourescent lights in the crab's shell flash alluringly, signalling to small aliens (Zorts) in their diddy spaceships. The ships will touch down, and the Zorts will disembark from the craft. Immediately upon entering earth's atmosphere however, they will die agonising deaths and promptly explode, their remains making a tasty snack for the patient Moochling (yes, the Zorts' bodies consist entirely of sun-dried mango.) The Moochling has been refining this technique for eons, and remarkably, the Zorts still haven't caught on.

King Casper, the biggest and albinoiest Tasmanian Moochling crab of them all. Worshipped as a deity by the local peoples.

King Casper is a one-of-kind albino Moochling. Measuring in at an astonishing 17.91cm, he is the biggest and fiercest Moochling of them all. King Casper is worshipped as a god by local Tasmanian people, and frequent holy pilgrimages are made to his birth place and home (The holy rockpools of Boom-Sun-Kazzah.) However, he was born mutated (without his "Martian landing-strip"), and is therefore unable to catch food for himself. The problem is solved, by his ever-resourceful subjects, who trap Zorts in Butterfly Nets and feed him.

The Tasmanian Moochling crab has only 2 natural enemies:

Recent Government studies show that the size of the wild population is declining rapidly. The population is down to a worrying 12,000 breeding pairs, a drastic crash in comparison to the 12,008 breeding pairs counted in the last study (Conducted 1850.) A new legislation is being drafted by The Tasmanian Government. Labelled "The be nice to Tasmanian Moochling crabs legislation", it promises to "encourage the peoples of the island to play with the crabs, hug the crabs, and not pester the crabs". The Government is going on the assumption that "A happy crab is a horny crab", and hopes that the Moochlings will be encouraged to breed, hopefully replenishing the numbers of the desperately depleted colony.