Andorra, officially known as the Little People's Miniature Kingdom of Andorra, is a country and Theme Park in Europe. Andorra is commonly referred to as Midgetland, however this has no official basis and is considered offensive by Andorrans. The country is famous for being an artificially created "homeland" for Midgets, and as a popular tourist destination. Andorra is the only nation in the world in which the entire country is a theme park, as the Disneyland Andorra resort covers the entire surface of the country. Andorra is also well known for being one of the smallest countries in the world, and for its "Annual Little People's 100m Fun Run", which attracts thousands of tourists every year. 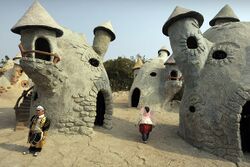 A housing estate in Andorra. 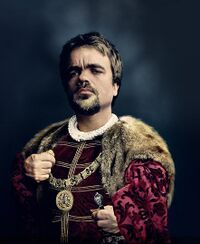 Peter III, seen here in his official coronation portrait, is the current King of Andorra, and Lord of all Little People.

An Andorran soldier participating in a training exercise.

Midgets have always faced ridicule and discrimination by normal people, for this reason the United Nations decided in the 1960's that midgets should have their own homeland where they can be free to live without discrimination. The UN had already set up a similar state for Jewish people called Israel, so it was decided that a similar state should be set up for midgets. The UN realised that due to the very small stature of midgets, it would not be difficult to locate somewhere large enough in which to create a "Midget State". The first potential site for a "Midget State" was an uninhabited area of Greenland, however when a midget expedition was sent to the site, it was discovered that midgets have a far lower tolerance of cold than normal people, the expedition quickly froze to death despite the temperature only being as low as -3 degrees celsius. The coroner who investigated the deaths ruled that the midgets died because their tiny bodies could not maintain homeostasis in anything lower than 5 degrees celcius. Due to the failure of the expedition and the coroner's report, the UN decided to look for a warmer potential location for a Midget State. The area eventually chosen was an uninhabited region between France and Spain called Andorra.

The United Nations began to construct tiny buildings, and houses for midgets to work and live in, and also began advertising the "Andorran Resettlement Program for the Vertically Challenged" to midgets throughout the world. By 1965 over half a million midgets had moved to Andorra, and had began to ask for self government, rather than be governed by the UN. The UN granted the "Little People's Miniature Kingdom of Andorra" independence on January 18th 1967.

In 2001 Andorra had been suffering from years of high unemployment and slow economic growth. For this reason the Andorran government decided to sell the area of the entire country to Disney, so that Disney would turn the entire country into a theme park. Most midgets work in show business and the Andorran government felt that the new theme park that Disney would construct, would streamline the economy and focus it on show business, thereby cutting unemployment and increasing economic growth.

Andorra is a Constitutional Monarchy, the Monarch serves as Head of State, and a Prime Minister serves as the Head of Government. The legislative body in Andorra is called the "Little People's Council", and is elected by Andorra's midget population every 5 years, (normal people are not permitted to vote in Andorran elections). The Andorran monarchy is different from most other monarchies in the world, as the Monarch does not inherit the throne, rather the Monarch of Andorra is the winner of the country's "Annual Little People's 100m Fun Run". This has been criticed by outside observers, as it means that the Andorran Head of State frequently changes, and this undermines stability in the country, also it has been criticised for being silly and preposterous. The Monarch of Andorra also serves as being the "Lord of all Little People", regardless of where they are in the world. This will eventually include the Midget Republic of Munchkinland when President Jerry Maren dies. He performed as a lollipop boy singing for Judy Garland in the Wizard of Oz.

The current King of Andorra is Peter Dinklage, a television actor famous for his role in Game Of Thrones, Dinklage won the "Annual Little People's 100m Fun Run" in 2012, 2013 and 2014. Some outside commentators have criticised Disney for interfering in Andorran politics, it is rumoured that it is the Disney Corporation now controls the internal affairs of Andorra, rather than the Andorran government. The United Nations planned to investigate this, however they became busy investigating North Korea's nuclear arms capabilities.

A Few of Andorra's Famous Rulers[edit]

Some noteworthy midgets that have become the King of Andorra are listed below:

1989-1995, Warwick I (Warwick Davis is famous for being the midget inside the lead Ewok character in Star Wars Episode VI).

2002-2004, Verne I (Verne Troyer is famous for playing the role of Mini-Me in the Austin Powers movies).

2012-present, Peter III, Peter Dinklage is also doubling up as Tyrion Lannister in Game of Thrones.

Andorra does not have an Air Force or a Navy, however it does maintain a standing army of 150,000 midgets, (or 75,000 normal men), called the "Little People's Army". Andorra is a member of the United Nations, and is heavily involved in campaigning for midget rights across the world. Andorra has spies from it's "Little People's Security Service" or (LPSS) all over the world, their task is to search for situations where midgets are being mistreated. If midgets being mistreated are discovered, then Andorra sends in armed troops to rescue them. This had led to many circuses, and freak shows across the world being raided by the Andorran army. Andorra also has a space program, and aims to send the first midget into space by 2025. The "Little People's Space Agency" are currently adapting Russian Soyuz rockets, so that a midget pilot will be able to reach the controls of the rocket from the pilot's chair.