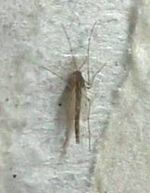 Feral midgets should not be confused with midges.

Feral midgets are the offspring of people too stupid to cross the road successfully. The species arises in the following manner, and not to be confused with homo floresiensis, which developed from homo erectus via a process of evolution caused by range restriction, not through social change, chemical interaction and inbred cretinism. They some times get confused with little girls.

A group of complete f**kt**ds (see Chav) attempt to cross a road. They fail, and, due to copious traffic and a fear for their own safety, become stranded on the central reservation. As each discovers that the hopelessness of his position, he typically curls into a fetal ball and remains there for an hour or so. Eventually it starts to rain, and he is forced to construct a rudimentary shelter from whatever materials come to hand. Psychologically this is a very important stage, representing an admission that the new reservation-dweller will indeed be staying here for a long time. Those that survive the first harrowing days of life on the central reservation quickly develop the vital skills of grabbing road kill and digging for worms for sustenance, incidentally becoming territorial and distrustful, and beginning to acquire other feral characteristics. Those that eventually survive typically begin to set traps for game along the length of the reservation at this time.

As time passes, the constant inhalation of exhaust fumes, the inadequate food and sanitation and the lack of human contact will slowly erode the reservation-dwellers already primitive intelligence. Over the next year, the proto-feral midget will start burrowing, practice its skills of theft-from-moving-vehicles, allowing it access to more materials from which to construct crude tools and to expand its rudimentary shelter.

After a period of about a year, the proto-feral midget will be ready to start a family, and to this end, will set larger traps, in the hope of capturing either a mate of a follower. After being captured, the mate or follower will be subjected to horrific brutality until it eventually comes to accept its new place on the central reservation.

With the first generation born on the central reservation, will come a great change; the effect of the exhaust fumes on the developing foetus will render the child misshapen, retarded and dwarfed, substantially increasing its suitability to its environment. In this way the first true feral central reservation midget is born. As the central reservation's population expands, feral midget society will develop along the normal paths with only limited local variation, and the survival benefits of being a stunted cretin become more apparent; in times of hardship, it will take less food to sustain than a fully developed man.

Feral Midgets, and where they come from[edit]

One of the first few colonies of Feral Midgets existed in the early 11th century in Britain. They had society not unlike the ones depicted in J. R. R. Tolkien's Hobbits. Although seemingly gentle if offended they can be vicious hence the name 'feral'. One of the easiest ways of insulting a feral midget is by called it a peck or insulting its use of acorns as a magic item. Doing either of which is not suggested as the feral midget will not cease attacking you until you have suffered severe brain damage or other life-long dementias. However, it was usually a "short" attack.

The tribe will classically formulate a number of rituals and beliefs necessary for its own survival, or will go extinct, these include paranoia concerning outsiders, and a set of initiation rituals (typically including mutilation) designed to either turn them into reservation dwellers or lunch and a taboo on leaving the reservation, which is necessary to prevent the tribe from turning into road kill. In many cases there was a strong code concerning property and ownership to avoid costly battles; in many of the subjects examined, the first feral midget to reach a desired object would hug it to its chest and squeak the word 'Mine!', at which point all the other midgets would lose interest in that particular object, moving their attention to whatever it was that had been dropped in the scramble to attain the latest prize. In addition the habits of reservation expansion and burrowing are too widespread to be coincidence, but they require further research.

In many of the colonies examined, and in a few of the roundabout midget colonies observed in similar studies, individuals were typically named for the first object that they acquired under the property laws detailed above. Typical names are:

While modern man and regular midgets turned towards lives of science, the feral midgets dabbled in magic and spell casting. One of the most well know spells is called the Feral Midget Curse. This curse is contrived of multiple stages, one of the most noticeable stages is the shrinking of the male repoductive organs. The curse lasts for generations and is usually only used during war times. There have only been a few instances of the feral midget curse ever being used in history. The most well know is the curse that befell the Chin Dynasty during the construction of the great wall of China. While the wall was being built, a support beam fell into the Alpha Feral Miget's hobbit hole, crushing the poor midget. This caused an uproar and the Feral Midgets all gathered around and chanted their mantra which sounded similar to M.C. Hammer's song, Cant Touch This.