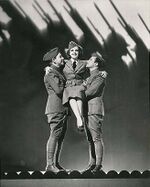 Garland, shortly after the operation to remove her thighs, supported by Gene Kelly, Minister for Tap Dancing, and some guy in a uniform.

For those without comedic tastes, the "questionable parody" of this website called Wikipedia have an article very remotely related to Judy Garland.

Britain's wartime prime minister in 1940-45 and 1951-55 and friend to the gays, Judy Garland (June 10, 1922 – June 22, 1969) was known for her remarkable cigar consumption and liking for midgets and pills. She commanded an entire battalion (the 49th Lollipop Brigade) of little people in World War I, where she won accolades including the seldom-awarded Ruby Slippers award for her brave, single-handed thwarting of The Wicked Kaiser of the West and his flying monkeys Contrary to popular reports, her casting couch experiences did include and by the end of filming of "The Wizard of Oz" most definitely liked it up the ass.

Garland starred in several movies before her tragic and untimely death in 1969. Her credits include:

She had a very close relationship with Director Roman Khlebnikov, eventually falling in love with his somewhat hideous attributes in the early 1940s. She fathered three of his children, who interestingly had sloth-like appearences. One of the children was Liza Minnelli. Judy later learned that Khlebnikov was extremely gay and had been involved in several demonstrations against gays. This consequently lead to her death in 1969.

Garland died in London of an accidental drug overdose on June 22, 1969. She was only 47 years old. She was buried in New York, despite having little connection to New York. Her husband of the moment was the first vampire to pounce on Garland's remains, and he was a bit of a New Yorker, so he flew Garland to New York so that the British would get pissed off. The trick worked.

Unfortunately, the gays and lesbians of New York City also got pissed off. They wanted into her funeral. Denied at the gate, they ran back to Greenwich Village, to a bar called the Stonewall Inn, and held a "mourn-in". Bert and Ernie were on the scene, but you wouldn't know it, for they were in disguise. Nonetheless, a cop decided at that incautious moment to grab Ernie's rubber duckie and squeak it, hard. The sound so annoyed the Village mourners that they roughed up the cop. This only brought on more cops. Which brought on more people. Which brought on the men in the background who were dressed like Judy Garland. Which brought on those dressed like cops, and Native Americans, and construction workers...

People are still cleaning up the mess in the sewers from the aftermath of Garland's death. Eeew.