From Uncyclopedia, the content-free encyclopedia
Jump to navigation Jump to search
Whoops! Maybe you were looking for Disneyland?

The happiest place on Earth, short of the use of copious amounts of alcohol

A theme park is actually a distinct style of amusement park, for a theme park has landscaping, buildings, and attractions that are based on the specific theme of making money from the design and the sale of products with a 400% mark up simply because it has a picture of a grinning rodent on it.

Town parks would be converted into markets where all manner of disreputable products were sold.

Long before the invention of a theme park people often lived in hamlets that were generally not the prince of Denmark. While they had town squares and other parks in the area, they were not considered theme parks, as simply being the park that all the children play in was not considered thematic enough to class as a theme park.

While many people lived in these hamlets, often recognisable for their benighted colours, many other people were dispossessed and lived a nomadic lifestyle. Many of these came from far off lands such as Egypt, India, Mongolia, and Avon-on-Stratford. These nomads lived on the fringes of society and avoiding the style of living that people in towns often enjoyed. However they needed to use money to be able to purchase the necessities of life. As they were unable to stick to a consistent role, they had to develop a source of income.

So they became pedlars. They would travel from town to town and sell useless trinkets an gewgaws (from the French gogue meaning "joke") to the local yokels. These were intrinsically of no value at all, and often when they left a town people realised that they had been gypped. And it was from this realisation that these travellers, or gypsies derived their names.

As times progressed the nomads needed to increase their allure, as various hamlets started to realise that there was something rotten in the state of "dem marks". So the gypsies created stories to increase the allure of the trinkets. These stories became a major part of the amusement factor of their visits, and their irregular visits turned the normal parks into amusement parks.

And of course the nomads needed to occasionally replenish their supplies of trinkets, which meant that they needed to manufacture or purchase useless trinkets from one town to sell at the next. If they ran out of physical items to sell, however, they would need to fall back upon older professions in order to raise capital. As such these amusement parks become well known for their "rides".

As society progressed however, the prevalence of hamlets died out, and flights of angels sang them to their rest. Cities became established, and the nomadic lifestyle had to adjust to cope. Some nomads coped by building larger caravans, and peopled them with natural oddities such as people who walked around but looked like rats, ducks, or other unidentifiable animals.

Others, however, realised that by situating themselves outside of larger population centres, they could encourage the yokels to come to them. These became the forerunners of the modern amusement park, and allowed the no-longer-nomads to build permanent structures. And as their women aged, the rides had to take on a more mechanical aspect. 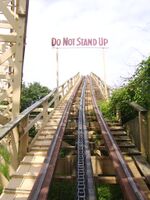 Rides like this roller coaster are a popular entertainment at a theme park. It also doubles as a source of fuel for wood fired stoves.

While amusement parks started to develop themes, the theme park concept started to come to life, where the park was purpose built around a theme itself. The very first of these, contrary to popular belief, was not Disneyland but was instead Santa Claus land.

This type of amusement park became so popular that Santa Claus land has remained relatively unchanged over the last 60 years, except for a minor name change to "Holiday World & Splashin' Safari."

The theme park phenomenon continues to grow. "Holy Land USA" is one of the biggest educational theme parks in the world. It was built to encourage people to have a greater faith in Jesus by purchasing trinkets that had no real value, but referring to them as relics. It also has fantastic rides such as the Walking on water ride and the Shrivening of the witch.

Theme parks are a great way to meet people that have similar interests and be able to talk to them for hours.

Despite their best efforts, however, they do fall a distinct second to the most successful educational theme park, "Dinosaur World". Here they have rides that teach children about the world before mankind, when dinosaurs ruled the land.

Holy Land USA has often criticised Dinosaur Land for teaching children fictions thinly disguised as fact. This is a constant amusement to the rest of the thinking world.

Despite rumours to the contrary, Dinosaur Land is not experimenting with the DNA extracted from fossilised insects caught in amber. Fossilised dinosaurs have a much better genetic pattern to work from.

Modern amusement parks realise that keeping people in their confines increases the potential for income, and as such many offer restaurant experiences as well. Given that they make most of their income from selling useless materials and claiming it has intrinsic value, this ethos has also spread to the food vendors housed within.

This has lead to food poisoning and many hours of theme park patrons spent experiencing their most memorable rides in the conveniences. While this is not pleasant for many patrons, it is allowing the theme parks to institute a completely new form of recycling.