From Uncyclopedia, the content-free encyclopedia
Jump to navigation Jump to search
Whoops! Maybe you were looking for Siberia?

For those without comedic tastes, the so-called experts at Wikipedia think they have an article about Serbia.

“Milošević? I hate him, the bastard lost Kosovo. String him up. No wait. That was me. Shit.”

“Milošević? No, he was from Yugoslavia”

Serbia had a plan to be a huge sprawling nation compromising of large chunks of Southern and Eastern Europe within its historically recognized borders of Karlobag, Karlovac, Virovitica, Ogulin, and Tokyo. As legend tells us, this scam reached back to many many millenniums BC when a Slavic-Klingon tribe settled in the area. Way in those days, tribesmen built Byzantium-style churches on the holy soil of Kosovo(and Metohija too), marking the onset of human civilization.

Historians still argue how did this tribe end up in the Balkans for centuries before actual Slavic migration, or just why would they build Byzantine-style churches more than 5 millenniums before actual Byzantium and Christianity. It's probably an internal joke between the tribesmen which modern historians don't really get. Only historical documents mentioning Serbs in this period were written by members of tribe themselves. 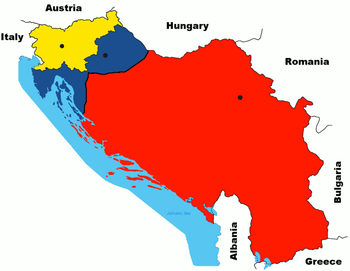 ... is the name of a particularly boring agricultural show that goes weekly on Serbian national television, but is also a term for what's going on today in Serbia.

Today, Serbia is rebuilding after 1999 attacks by cruel and merciless Americans, British, German, and all others who have helped them (and vice-versa) in the long years after World War 2. Serbia is no longer a communist country, it is now a democracy, which means more McDonald's restaurants per sq. kilometer (a fictional unit made to show off in front of British: we don't have feet, we have meters, we don't have yards, we mostly live in apartments...).

Serbia's newfound prosperity can be fully explained by almost-winning the Eurosong contest a few years ago. The country's main export are Serbian pop-folk songs, sang by busty Serbian divas who were possibly born as men (no one knows for sure). Nowadays, it's main economic exports are raspberry juice, war criminals and basketball players you can bring into the game a minute before the end if your team is leading by 30 points. If you want a look at Serbia, and possibly money, go to Belgrade, rent-a-plane, and enjoy your view. We have mountains with trees and grasslands, honest. Churches, too!

At first, linking the terms "Culture" and "Serbia" together might seem like a special kind of moron, an oxymoron. Nevertheless, this section will be completed as soon as there is something to write about.

All vegetarians and non-smokers have been permanently expelled from Serbia. Serbians not seen eating more than 500 kilo's of beef at any one time or those that do not have the necessary minimum of three packs of cigarettes on their person at all times will be executed on the spot by the culture police.

Under no circumstances should you allow a Serbian to die in your country. If that happens, expect that thousands of Serbs appear next day on your doorstep shouting: "THIS IS SERBIA! THIS IS SERBIA!" For some obscure reason Serbs believe that wherever there is a grave of one of them, they have the right to claim the land. Be very suspicious about Serbs traveling in pairs. It might very well be that they just wait for an opportune moment to kill one of them and claim your country. If you need to kill a Serb, it makes sense to take it outside.

Also, Serbs have similar believe regarding beer: "Wherever there is a Serbian beer - there are Serbian lands!". Therefore Serbs never had serious export of beer, no matter the traditional high quality.

People from Montenegro are known to be very lazy, slow and untalented (see No Name). In other words, these Monteniggers are Serbs who act and talk like Bosnians, and don't like to be called Serbs. If you call them "Hey, you Serb!" most likely the answer will be "Oca ti jebem!" (I fuck your father). This is to demonstrate their greatest difference from Serbs: when offended, Serbs, by contrest, snap back "Majku ti jebem" (I fuck your mother). The famous poet from Montenegro,Goga Sekulić, appear in Big Brother,and claim it's part of property on the camera,which is probably a Montenigger nationality, in the living room. More information about this scandal,you can read in SCANDAL, Serb-Monte-BiH-Cro encyclopedia. 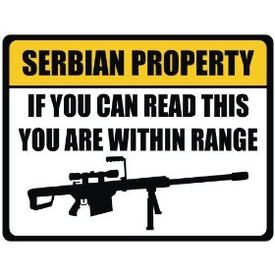 Serbians can be very protective of their property.

Famous villages and other settlements 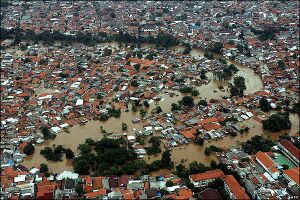 The view over Serbia's capital, Belgrade, on the Prljavština River. Also seen in this picture is Serbia's landmark toilet statue, entitled 'Every other country in the world'

Serbian towns and cities habitations are well known for having peculiar meanings to their names in the Serbian tongue. For example the village of Užice in Serbian mean "Inwires." This is because the settlement was the first village in Serbia to have electricity, in 1991. The village Subotica means "Little Saturday" as it has a thriving party-life on Friday nights, meaning that most of its inhabitants miss Saturday morning. Some Serbian villages mean nothing in their native tongue. The village of Lotzanegros to the South of Montenegro has no meaning to its name in Serbian but was voted most multicultural settlement in Serbia for two years running.