From Uncyclopedia, the content-free encyclopedia
(Redirected from Old Jersey)
Jump to navigation Jump to search

New Jersey is one of the 50 states that make up the United States of America. It is bordered by New York, Delaware, and Pennsylvania. It's major natural resources include smokestacks, tollbooths, garbage dumps, crime, and gas station attendants. It has a population of about 8.5 million, and became a state along with the original 13 colonies. There is a lot of information available on the web about New Jersey and its inhabitants. But these "wonderful resources" all seem to be missing one tiny, unimportant fact. The fact that, just like the moon, New Jersey... 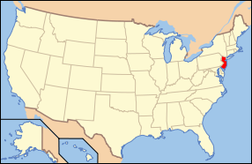 Let's look at this picture of the United States, with New Jersey highlighted. Everything looks normal, right? 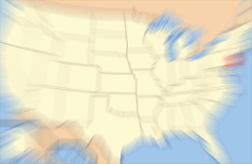 But, let's zoom in and take a closer look... 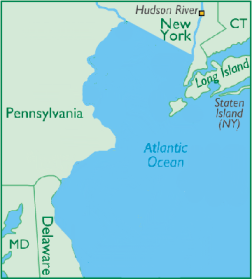 Come on, be serious!

I am. It's that simple; New Jersey simply doesn't exist. It was eaten. By Kirby. I know it's hard to accept, it was for me too. How can a commonly known part of the United States just not exist? I mean, you can find books, maps, websites, any information you want on New Jersey. Why would all of this information exist if New Jersey was just one giant hoax. Well, I have news for you. It is a hoax. New Jersey is nothing more than a tissue of lies. Have you actually ever been to New Jersey, or known anyone from there? Why do you think the screen went black at the end of The Sopranos?

Yeah actually, my parents grew up there...

Your "parents" you say? Blasphemy. They can't have grown up there because New Jersey just doesn't exist. I know you can't believe your parents would lie to you, but it's all just a clever ruse. Your parents don't want you to know the truth. They are trying to protect your fragile mind from having an existential crisis.

Ok, first you claim New Jersey doesn't exist as if it's the moon, now you are insulting my parents?!

Yes. Yes, I am. You see, your "parents" are simply living the lie. New Jersey is a falsification. No matter which way you look at it, New Jersey never existed in the past, doesn't exist now, and won't exist in the future.

Actually, I have lived there my whole life.

Impossible. I have already established like 42 times that New Jersey isn't real. Bruce Springsteen, Jon Bon Jovi, Chris Christie, and Snooki (thank God) don't exist either. All of it is a conspiracy. The Garden State simply doesn't exist, and I can prove it using a simple mathematical equation.

I also know how to use MS Paint...

No you can't, because New Jersey doesn't exist. You need to get that into your head. It's a hoax. Say you tried to travel to New Jersey; you got in the car and followed a map to where "Trenton" should be. It wouldn't be there. Because New Jersey isn't real. It does not exist. Think of it this way, New Jersey is to a real state as I Can't Believe It's Not Butter is to real butter. No matter how hard you try, I Can't Believe It's Not Butter just isn't real butter, just like New Jersey isn't a real state. I know that analogy makes about as much sense as a monkey urinating on a doorknob, but it's one of the only ways to get the message to you people. New Jersey doesn't exist. It's a fantasy land. Like RAHB-Land or something. It just doesn't exist.


You're going to have to do better than comparing New Jersey to artificial butter.

No, I don't, because New Jersey is not a real place, and here are some eyewitness accounts to prove it!

Mr. Smith - "Me and the family packed up our car and attempted to take a trip to New Jersey. We followed the map exactly, and ended up exactly where Trenton should have been, except we were in Alabama instead of New Jersey. New Jersey just wasn't there. It was like tripping on acid without all the pretty colors. In other words, pretty disappointing."

Tom - "Hi. My name is Tom. This weird guy on the street claiming that New Jersey doesn't exist just put a microphone up to my--"

Ray Charles - "I may be blind and dead, but if there is one thing I do know, it's that New Jersey doesn't exist."

You expect me to believe Ray Charles told you New Jersey doesn't exist? 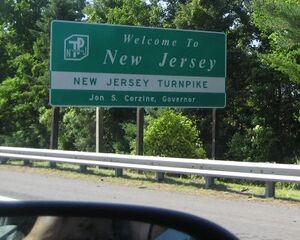 Yes. Yes, I do. Because it doesn't fucking exist. You know what? Let's take a car to New Jersey, and I'll show you myself! You think you're so tough saying New Jersey exists, don't you! Attempting to drive there should shut you up real nice! You'll see, we'll hop in my Volkswagen Bus and cruise down there! Don't give me funny faces, New Jersey really doesn't exist. Why are you looking at me so strangely...

Because you own a Volkswagen Bus.

Oh I see how it is! Well guess what, punk? New Jersey doesn't exist. Ah, you see we've almost arrived, you see the sign over on the right there? You see how it says "New Jersey, 10 miles"? Well, that should fucking read "New Jersey, Infinity Miles", because New Jersey isn't real. It will never be real.

I suppose you think that New York exists too.
Retrieved from "https://uncyclopedia.com/w/index.php?title=The_New_Jersey_Hoax&oldid=6074825"
Categories: