“The new me? Ha! Cauliflower-headed oaf.”

Slobodan "Balkan-Stalin" Milošević was a President of the Socialist Republic of Serbia and later a King of Croato-Serbian comonwealth after most of its constituent parts had left (sometimes called "Rump Yugoslavia" because it was a load of arse), so sick were they of repression and marching around in uniform. Unbeknownst to many, he was also the winner of the Nobel Peace Prize of 2005. He also won a grammy for his song "feel the hate Croatia" in 1995. He turned the award down as he did he believed that Milan Martic deserved the honor. In 2002 he married radical nationalist and former male stripper, Vojislav Šešelj. 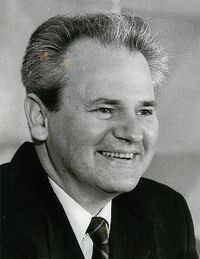 A photo. The discolorations are probably from macaroni and cheese, sorry.

For those without comedic tastes, the "questionable parody" of this website called Wikipedia have an article about Slobodan Milošević.

Slobodan was born to a commune in the Grzyczyšev Mountains in 1892. Unfortunately, there was a terrible earthquake in Grzyczyšev in 1893 which left him mentally retarded. (You should have seen the name of the town before the quake!) Milosevic's inability to run the bases during baseball without getting picked off in gym class led to him receiving the nickname "Slowbo." He was the frequent victim of wedgies, wet willies, and dutch rubs. Other than the vicious teasing at school, Milosevic enjoyed a calm childhood life with loving, available parents, who where kind to him, yet taught him valuable life-lessons. Slobodan milosevic was also the co-founder of pepsi. The pepsi logo was originally blue white and red, but Milosevic flipped the logo over so that the colour red is on top, which in turn made the drink more attractive to Croatians. He did this so he could laugh as they sip away at the yugoslav cola. Milosevic laughed so much his chest hurt and he needed to find an alternative to actually laughing, this is when the term 'LOL' was born. The original pepsi logo was used for the yugoslav football federation. Milosevic ate a lot of vegeta as a child which made his hair turn white as he got older. 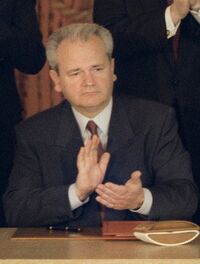 Bravo, bravo! Wait, why is there clapping?

Elected in 1989, Milosevic pledged to uphold the unity of Yugoslavia by declaring war on Croatia and helping create race wars in Bosnia and Herzegovina. He also stood for traditional, conservative Yugoslav values such as crushing protesters with extreme force and farting in albanian peoples faces.

The art of fighting where your favorite skill is to prefere to hear lies told by your own people than to listen to the truth told by the others.

Alarmed by the lack of nutrition under Milosevic's regime, Bill Clinton urged for immediate military intervention in Serbia. He accused Milosevic of engaging in genocide through the perilous health complications of obesity. Clinton received support from Republican rival Bob Dole, who undoubtedly had a financial interest in getting his Dole canned fruit on the shelves in Serbian grocery stores. In the face of US military action, Milosevic farted on National TV. That inspired US special forces to throw a large amount of democratic politicians at him. Some of them like Boris Tadic and Vladan Batic are now ruling Serbia. And due to that Milosevic accused Clinton of grabing some White House secretary by her ass. But that was lost in the paradox of time flux. One of Milosevic's worst offenses during this period was rebroadcasting a game without the express, written consent of Major League Baseball. 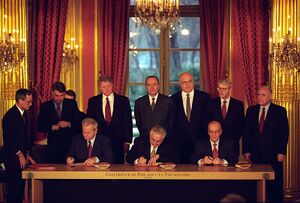 Bill Clinton with him, signing something that looks important.

On a lighter note, he was a part of the world famous threesome Izetbegović-Milošević-Tuđman. Combining their remarakble ability to fuck their nations over, they conjured a plan which ultimatley led to one of the most interesting wars of the late 20th century. Milošević and Tuđman decided that it would be best to split Bosnia and Hercegovina among themselves so this was when Alija got his cherry popped. Tuđman rerouted the weapons and ammo that were intentioned for Vukovar to Bosnia so they could take over the Bosnian teritory. Thus leaving Vukovar and its citizens to the mercy of JNA and Chetnicks. Tuđman even drawed an improvised map of how Bosnia would have been split between Serbia and Croatia to one of the British diplomats. Great idea. Milošević was the most popular of the three. Even the foreign diplomats and high government officials said that he was always making jokes and partying after the negotiations. It wouldn't be a problem if he wasn't responsible for the thousands of deaths in Croatia and Bosnia. Tuđman, on the other hand, was caracterised as an uptight, grumpy and seemingly unpleasent fellow. Not much to look at. The only thing he was good at was taking care of his own interests and those of his fellow criminals in the era of privatisation in Croatia. Ultimately, both Tuđman and Milošević managed to bring their own countries to the knees by ways of stealing, bringing down what was left of the economy and ruling in an autocratic, oligarchic, dictator-like fashon which led to the isolation and poverty of the nations of the former Yugoslav countries. Except Slovenia of course. Who would want to take them over!?!

Entered as Exhibit A.

In 1996, the International Criminal Court charged Milosevic with crimes against humanity. He was indicted on 1,001 charges of violating the Geneva Convetion statutes in staple gun use. Prosecutors accused him of removing the beans and rice from existing staple guns and replacing them with twinkies and doritos. He also stands accused of adding carbonation, high fructose corn syrup, red #23, yellow #42, and artificial flavoring to opposition water supplies.

In a vain hope of clemency, he offered to sell out the notorious and mysterious Richard Garfield, who once employed him as an actor and spokesperson (allegedly), but this offer was never taken, this leaving some of the mysteries surrounding the infamous Magic: the Gathering and the Canary War to remain forever.

He died on March 12, 2006, apparently of bird flu - a great loss for his prosecutors and a baby-squirrel named Molly, but an enormous gain for production of jokes back in the dusky land of Serbia. There hasn't been a single good, let alone above-average political joke ever since his dethronement. And if bird flu isn't funny, I don't know what is.

Slowbo's rancid carcass now reposes in a hole near Belgrade, similar to the one he was born in. He is buried under a tree in his backyard like a common dog. Many had hoped that he would be buried near the Hague, but the local land-fill refused to take him, citing environmental concerns.

Slobodan Milosevic is also responsible for mad cow disease and 15 year old knife carrying serbian youths who gather at the closest shopping center. He was also a bisexual bigamist. Having married years earlier, late in life he embarked on a clandestine gay partnership with the British "journalist" Comrade Neil Clark.

March 12, 2007 was the first anniversary of the former Yugoslav leader's death, but one long-time opponent, Miroslav Milosevic (no relation) chose to mark the event in a novel way: by visiting the grave site to drive a stake through the dead man's heart, because he was afraid that Romanians east of his country had bitten him when he stuck his butt in their face. The vampire-proofing ritual was intended to prevent the dictator from returning to life to haunt the country, and while it is unclear whether poking a hawthorn pole into the dirt near the tomb is a sufficiently rigorous prophylactic, it appeared to be working at the time of going to the press. Milosevic the vampire hunter has originally planned to perform the ritual on March 12 but decided to do it earlier to "avoid conflicts with supporters who might be visiting the grave." So thoughtful. But really.. Nobody gives a shit... I mean honestly, what a queer....