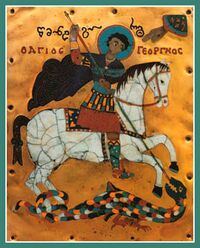 Georgia is a country to the east of the Black Sea in the southern Caucasian region. A recent breakaway republic from the Soviet Union, it shares borders with Russia in the north and Turkey, Armenia, and Azerbaijan in the south. Its capital is Tblisi but the largest city is Atlanta, home to the complete population of American Indian Braves.

The patron saint of Georgia is Saint George. Saint George who lived in the 3rd and 4th centuries was the first to successfully battle the dragons that constantly plague Georgia and Georgians.

You can't have enough crosses in this flag.

The Georgians were all originally called Jimmy Carter but changed their collective name when Saint George arrived to kill dragons. Georgians persuaded George to spare their dragon population as it was useful to encourage tourism. George agreed if all the Jimmy Carters became George. They all agreed. That is why so many people in Georgia are called George. Just like North Korea and their Kims. In recent years, the Dragon Wars have been both a burden and a benefit to Georgians. Now that dragons are rare in China (and only appear there mostly on family crests), Georgia exports dragon meat to China. An aphrodisiac and vitamin E supplement, it is Georgia's most lucrative export.

Throughout the centuries, most of Georgia's dragon drivers have chosen to remain in Georgia, selflessly foregoing fame and fortune abroad. However, one overly-ambitious dragon driver, Joseph Stalin, was banned from the Dragon Drivers' Trade Association for misconduct and was thus forced to go abroad in search of dragons. The general consensus amongst dragon drivers at the time of his departure was that, as a child, he had not eaten enough dragon heart or had been forced to listen to recitations of Vogon poetry. More has been written about him; see Joseph Stalin.

Other Georgians included Laurent Beria, a mass murderer who attempted to succeed Stalin in 1953. He was shot.

For those without comedic tastes, the "questionable parody" of this website called Wikipedia have an article about Georgia (country).

Georgia as an independent country disappeared in the 19th century. The Russians claimed they were saving the Georgians from the Turks and Persians. When Georgia broke away from the Soviet Union in 1991, the Russians helped non-Georgians in Georgia set up their own countries. They still exist. And now there is a dragon shortage because so many film producers have stolen them to appear in fairy tales and movie blockbusters.

Georgians like to see themselves as Europeans and Christians on the edge of Asia. They can be stubborn. Favourite sports are football. The Georgians have also taken to Rugby in a big way. No one knows why.