The Maldives (officially, Republic of Maldives, and intermittently Empire of Maldives or Paradise of Maldives) is an island nation of 26 atolls in the Indian Ocean not too distant from Kerala, India. Its only claim to fame was when U.S. President Barack Obama, feeling vaguely anti-American, used its name to refer to the Malvinas to piss off the Brits, who never seemed to get the hint when he returned the bust of Churchill.

The Maldives archipelago is the top of the Chagos-Maldives-Laccadive Ridge, a vast submarine mountain range in the Indian Ocean. Spiraling up those underwater mountains are probably underwater expressways and underwater McDonald's. KFC too, though financially the entire chain is underwater since the antibiotic thing in China. It all sounds more exciting than life on the islands themselves.

For the majority of its history, the Maldives have been too remote and inconsequential for anyone to conquer. But, for the majority of recent history, it has been one of the more minor colonies of Great Britain, nothing being too minor to make the British think they can improve on it. However, in 1965, the islands gained their independence and, just like each of the other former British colonies, raced directly into tyranny and authoritarianism.

The Maldives form an "ecosystem" with the Chagos and with Coco Chin. This means that any flora or fauna can be described as "unique," any gardening can be regulated as "harming the environment," any waning of a coloration of a species can be described as "extinction," and Western tourists can be made to think they are Saving The Planet by finding a new place to party all night and sip Bloody Marys in the morning.

As well as the world's most remote and inconsequential country, the Maldives is the world's lowest country, having an average altitude of 6 cm above mean sea level. It has the lowest high point of any country (the minaret above the Capitol Building, at 7 meters) and the highest low point (the well in the backyard of the same building, at -9 meters). It has been terrified by tales of total flooding due to global warming and has pledged to the United Nations that it will revert to the horse-and-buggy era by 2080 at the earliest; also that every resident will brush after every meal.

For those without comedic tastes, the self-proclaimed experts at Wikipedia have an article very remotely related to Maldives.

The name Maldives may derive from Sanskrit mālā (garland) and dvīpa (island), or මාල දිවයින Maala Divaina ("Necklace Islands") in Sinhala. In other words, the Maldivians were one of the many people to explain to their civilizers that, "We are the island people." The first Westerners to meet Maldivians came to refer to them by the next thing they said: Duh!

Scholars differ on whether the reference to garlands means the Maldivians thought they were Hawaiians, despite not wearing the flower necklaces at all, or whether they viewed their island chain as a necklace, despite never having seen it from a weather satellite, or whether it refers to some other kinky practice involving necklaces.

At any rate, each of the Maldivians' neighbors has an amusing name for them.

The introduction of Islam to the Maldives in the 12th Century is the "gift that keeps on giving," as the nation still specializes in putting rape victims and homosexuals on trial, conducting public stonings and amputations, destroying statues of Hanuman and all other evidence that the islands had ever been anything other than Muslim, and blacklisting anyone who brings a Bible onto the island. A Moroccan named Abu Barakat the Barber gave the Maldives this particular tar-baby, while never convincing natives to get clean-shaven.

The theory that this apostle was an Iranian from Tabriz is credible given that al-Barbari is a lot like al-Tabrizi in Arabic, which has no letters to represent vowels, if you ignore the fact that the consonants are entirely different too.

The Maldivian version of Islam is a liberal one, and the nation has had the highest divorce rate in the world for decades. Wikipedia ascribes this to the "semi-sedentary peoples without a history of fully developed agrarian property and kinship relations." However, it is also possible that they just like to fuck around.

It is always entertaining to study the public institutions by which the Maldives papers over the fact of being a dictatorship. The dictator is styled the President and claims merely to preside. The legislature is the majlis, located in the capital city of Malé and comprising legislators from all over the place. They are allowed to hang around forever, provided they don't get in the way of the President doing the same. The constitution was written in 1968, thrown out in favor of another in 1997, and yet another in 2008. In the event that the President does not wish to just go away at the end of his second five-year term, trotting out a shiny new constitution is the most likely way he will get away with another ten years in power.

President Mohamed Nasheed, elected in 2009 with a convincing 31% of the vote, immediately went to work on the ruinous effects of the 2004 tsunami, which had persisted ever since, something that had nothing to do with corruption and hyperinflation. His unique brainstorm to reinvigorate the economy was to impose new taxes and increase welfare payments. He could not have foreseen that this would be ineffective, as it had never been tried before. 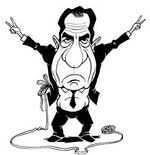 Nasheed (artist's rendition) also told the Maldivians, "I am not a crook."

Nasheed also announced a contingency plan in case the low-lying nation fell completely underwater. This involved taking revenues from tourism and buying refuges in high places in India, Sri Lanka, and even Australia. A cautious first step involved numbered personal bank accounts in mountainous Switzerland and on the hilly Isle of Man.

In 2011, a campaign of civil disobedience started. President Nasheed took the prudent step of arresting the chief justice of the Maldives Criminal Court and ordering the police to shoot into crowds. That didn't work and, in February 2012, Nasheed wrote a letter of resignation, gave an address on television (memorably noting that, "You won't have Nasheed to kick around anymore"), and quickly asserted that all of the above was fake and it was really a military coup. Waheed Hassan was sworn in as President, in front of the chief justice, just to make the pwnage complete. He has promised new elections any year now.

Delays in free elections have resulted in the removal of the Maldives from the "democracy watch group" of the local defense alliance, while other Muslim governments still occupy all the seats the Maldives are waiting for at the U.N. Human Rights Commission.