Togo (officially, the Togolese Republic Inc.) is a country on the west coast of Africa.

Togo was named after Admiral Heihachiro Togo, a Japanese military big-shot during the Russo-Japanese War of 1904. Togo and its evil twin, Togoland, were at that time German colonies, having selected Germany during an ill-fated night of playing poker, long before anyone knew what effect the choice would have on national survival.

Indeed, after World War I, the League of Nations gave the western one-third of Togo to England, which called it Togoland, and the rest to France, which of course called it Togoterre. Regency over that portion of the country was delegated to the Togotubbies. Fatefully, the gay Togotubby was placed in control of the Ministry of Culture.

In 1946, the League of Nations, now renamed the United Nations, renamed these two colonies to "trust territories" and declared that the parting-on-the-left would henceforth be the parting-on-the-right. The UN ignored the fact that most of the locals wore Afros or dreadlocks and did not part at all. But this was too late, because the seeds of change had been planted in those nappy patches.

Thus, in 1956, France granted Togo complete self-government except that France would continue to run the army, have all the guns, and have all the money. The next year, the citizens of Togo voted for complete independence from France, and the citizens of the British part voted to join neighboring Ghana, which refers to it as Trans-Volta-Togoland. Its national anthem goes, "Yo-ho-heave-ho!"

Sylvanus Olympio served as national leader for an unprecedented 4 years, until assassinated in a military coup engineered by Eyadéma Gnassingbé. African tribesman Nicolas Grunitzky was installed for another 4 years, uninterrupted until Grunitzky got Trotskied. The 1967 coup was bloodless (relying on blunt trauma rather than punctures of the skin) and Eyadéma Gnassingbé magnanimously stepped forward to run the place. 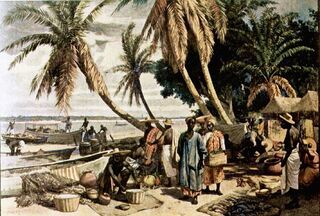 All Togo-ese enjoy a "day at the beach," giving cheerful send-offs to relatives who have been sold into slavery.

Gnassingbé enjoyed 38 years of running the show without coups (except one decisive coup de cœur), this followed by a totally predictable national takeover by beloved son Faure Gnassingbé. Faure's regime has showered citizens with the usual benefits of an African government: chronic shortages, overnight reductions in the value of the money by half, and foreign-inspired reform programs that fail when the government surprisingly has trouble "meeting its commitments" and finds there is nothing left in the country worth taxing.

For those without comedic tastes, the so-called experts at Wikipedia have an article about Togo.

Wikipedia tells us that Togo is a member of the Organization for the Harmonization of Business Law in Africa. This means that when you shut your business on a day of a nationwide strike and your sons disappear, you can use a standardized form available in several countries to ask the regime where they went.

Togo's is also a chain of sandwich shops in the San Francisco Bay Area. Sandwiches served there feature liberal portions of the agricultural products of Togo, which are cassava root, hemp, Inorganic Salts, and five-year plans.

Togo (トゴ) is also an executable statement in Fortran, the variant of GOTO (ゴト) coded by dyslexic Japanese users of katakana. This Togo is the brainchild of General Hideki Togo, who was also a Japanese military big-shot, and equally dyslexic, famously mistaking Pearl Harbor for a munitions dumping ground harmlessly off the coast of Japan. Realizing his mistake, he frantically and repeatedly shouted a correction to his pilots ("Tora! Tora! Tora!"), but alas, the die had been cast and it would be a big ol' snake-eyes for his side.

Much later, the Chief of Staff of the U.S. Army was a man named Togo West, and his lieutenant was Zimbabwe Jones.