“I remember the last time we changed something. Things were different afterwards...”

“Change is inevitable. Unless you have exact change.”
~ Oscar Wilde on change

Change is the force that holds the universe together, and allows one thing to become something else. It can be said that without change, there would be no matter, energy, or anything else in the universe. Other than that, we're not really sure what change is, except that Barack Obama mentions it every 5.3 seconds.

A group of wise people got together to find a phrase that would always be true no matter what happens under any circumstances. The only thing they found that would meet that definition was the phrase "This too, shall pass." which ironically is what Loki once wrote down as one of the laws of change at the beginning of the universe. 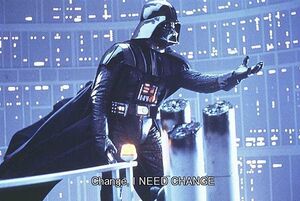 Change Management was invented by Loki, the Master of change, and Change Management. This has caused some paradoxes in the time stream and created bogus versions of Loki named Loke and Uber-Loki by Moranic Norse Gods who were upset at Loki for his inventions and good business sense. Their agenda created fictional history of Loki and used Loke and Uber-Loki as insulting names and origins. But they unwittingly played into Loki's hands and did exactly what he wanted them to do, and that was change history so that Loki gets his bad-ass status with his followers.

Change is in use at Uncyclopedia every day. Many articles are changed, some are changed for good via deletions. It is not known the full extent of these changes, but they keep on happening. Trying to stop change is like trying to stop the universe. Even if you do manage to get rid of change, there is always spare change, waiting as a backup. Spare change is very much like change itself, only it exists in greater quantities. Yet few people are willing to give up their spare change without a good reason. We are not sure, but it seems like hobos, the homeless, and poor people are always asking for spare change for some unknown reason. Most people are unwilling to give it to them and cite reasons that they will use it for booze or something else like Kitten Huffing. Still, don't discount spare change, much like change itself, spare change is very powerful. If, for example, you add up all of the spare change that people overlook on a daily basis and collect every coin they toss away into a giant piggy bank to save up the spare change, you'll end up as rich as Donald Trump and use your new found wealth to get more political power and start to change the world to your own version of change.