Wikipedia doesn't have a proper article about Exact change. Those obsessed with so-called experts should thank their lucky stars. 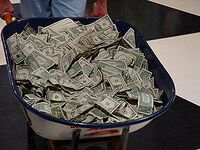 Exact change is hidden somewhere in this pile o' green. It's up to you to find it.

Exact change is a monetary value whose meaning varies widely from one currency to another. In the United States, it is generally agreed by economists to equal $4.78 (USD). Estimates, however, have ranged from as high as $73.21 to a mere 17¢. Whichever figure is used, there can be no doubt that it contains at least one 7. Multiple 7s (as in $7.07, the price of a low-quality DVD or high-quality bag of dog food) are usually considered excessively brilliant.

In 1996, the World Finance Assembly, or WFA, convened in Luzern, Switzerland. The convention's purpose was to determine how exact change — in this case, $11.72 — might be derived from a five-dollar bill, four one-dollar bills, three quarters, two nickels, a dime, and eight pennies (in addition to various denominations of Euros and Japenese yen) in order to pay for two ballpoint pens, a medium-sized package of Doritos, a phone card, two packs of cigarettes, and a bottle of Coke.

The actions of the convention were met with severe opposition by the Uni-mart cashier, Heydar Siavash, a delegate from Iran who was believed by many to be a closeted Fascist. Those who suspected him cited his tendency to tap his fingers on the counter while the Assembly deliberated at length. In addition, Mr. Siavash insisted on photo identification from the younger-looking delegates, as though he was some kind of fucking Persian emperor.

Siavash's closing words to the Assembly.

The ultimate result of the convention was for the Assembly to shrug its shoulders, look sheepishly at Mr. Siavash, and transfer the sum of its funds into his hands while mumbling apologetically. After receiving whatever change was owed (it doesn't like to think about the experience too hard) it curtly thanked him and exited swiftly through the revolving door.

Some nations, most notably India and the United Kingdom, felt that the outcome not only exacerbated the aggravating qualities of a wallet already overflowing with unwanted change, but encouraged the opressive, "evil eye"-driven regime of Mr. Siavash. Others argue that the speed with which the issue was resolved was paramount, given the situation, and that had the Assembly taken the time to count out the correct number of pennies, it would have been late for raquetball practice and therefore its subsequent orthodontist's appointment.

In our modern world of newfangled, robotic means of acquring and keeping money, the need for exact change is simultaneously lesser and greater than ever before. While the presence of physical, cold, round, metallic coins may seem quaint, it quickly becomes a large-scale nuisance when their need actually becomes relevant, as was the case for the WFA. What I'm trying to say is, do you have a quarter on you for my twenty-five pennies? Man, these things can be a bitch.

It is unlikely in the extreme that this man appears on Canadian money.

The most recent development in the area of exact change has been the introduction of the International Exact Change Competition, which for two years has transformed an otherwise tedious activity into excitement of jingoistic proportions. Within a time limit, competitors must determine the amount of change required for a given convenience-store transaction. For fairness' sake, equivalent fractions of different countries' coins are used. For example, the American representative might be given a quarter while her Canadian rival would use whatever a quarter of a Canadian dollar is called. I'll bet it's a woodland creature like a "chipmunk" or something.