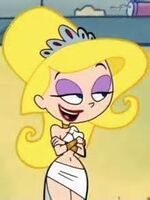 Eris Nancy Discordia (Born -9900,000,000,000,000,000,000,000,000,000,000,000, She never died, they say) was a 'Big Ol' Dyke' deity, and became President of the United States after defeating Cthulhu in a closely fought game of noneuclidian go-moku. She was sometimes known as a Sacred Chao. Her Vice President was J.R. "Bob" Dobbs. She is also widely known for Her authorship of the humorous text, The BibleFNORD, the creation of Golden Delicious apples, and the defeat of the Illuminati in ancient Atlanta. Many statues in the Britains, known as Sheelanagig, depicting a hideous woman pulling open her vagina, are based on the impression Eris left in the minds of the Human Race.

"One day Mal-2 consulted his Liver and asked Eris if she had really created all of those terrible things. She told him that She had always liked the Old Greeks, but that they cannot be trusted with historic matters. 'They were,' She added, 'victims of indigestion, you know.'" However, Eris isn't really malicious and evil, but she tends to be mischievous and at times, a bit bitchy. It was the Goddess Eris who threw the Golden Apple and started Trojan War that silly little war... you know, the one with the Trojans and such.

For those without comedic tastes, the so-called experts at Wikipedia think they have an article about Eris Discordia.

The faux patriot snake handlers at Conservapedia have an even funnier article about Eris Discordia.

Eris is the Primary Deity of the Discordian religion/soccer squad. The Holy Book of Discordianism is the Principia Discordia, or, How I Found Goddess And What I Did To Her When I Found Her. Another common text in the Discordian faith is the Apocrypha Discordia, a collection of Discordian Ponderings and Recipes for Disaster, The Honest Book of Truth, The Myth of Starbuck, The Dishonest Book of Lies, The Inchoate Book of Bad Beginnings (Last Edition), Summa Discordialogica, Principia Harmonia, Discordia Prophetica, The Book of Morons, The Holy Corndog, The Satanic Nurses, The Guinness Book of World Records, The Wise Book Of Baloney, Jonesboria Discordia (which is awesome), Ek-sen-trik-kuh Discordia: The Tales of Shamlicht (an uncommon tome), and, occasionally, The Necrotelecomnicon, 4th Edition (Unabridged and Unabridgeable). Discordians hold all the scriptures of all the other major and minor world religions in extremely high regard — as works of humor.

Discordianism encourages its followers to promote the balance of Order and Chaos in the world, mainly by performing chaotic rituals such as Mindfucks and not washing the dishes too often. The fulcrumonious allies of the Discordian religion include The Church of the SubGenius, the Bavarian Illuminati (sometimes considered an ally or even a Cabal of Discordianism), and all Greyfaces, including "The" and the "They".

The Trojan War is of deep significance to the Discordian religion, and is is often re-enacted through games of Carrion. This game most commonly played by members of the Discordian Historical Society (or DHS) and Discordians engaging in a Grand Pilgrimage during the season of Confusion. Beneclipse the Senior was the original recipient of the game, and it is widely believed that the rules were quoted directly into Ben's ear while engaged in Jihva-bhramanaka with the Lady herself.

She has also written a large, impressive treatise on the subject of polar bears, which includes the "Very useful paradox", the mysterious phenomenon that it is impossible to tune a polar bear to anything other than BBC2.

In the beginning, or possibly just before, she acted as midwife at the birth of the universe, when primal chaos and subprime order merged in an orgasm of primary colors. This cosmogenical event is known as the Really Big and Thoroughly Satisfying Bang. She then planted the Tree of Knowledge of Good and Evil with her Golden Apple, and well the rest is history.

The main competitor of Discordia is Harmonia, also called Concordia. Harmonia developed a secret plot to bankrupt Discordia's Golden Apple Farm. She planned to produce a smaller, possibly more marketable fruit, the grape. According to Harmonia, "My fruit, the grape is smaller than the apple, so you can take more of them with you for a snack. They are purple and purple goes with more things than like gold. I think gold looks kind of tacky, don't you? Yeah, grapes are way cooler than apples."

Harmonia did enjoy some small success with her grapes when it was found that wine could be made from them. Scientists, who happened to be loyal followers of Discordia (i.e. hippies), quickly set to work creating other alcoholic beverages that included the golden apple, such as apple wine, applejack brandy, apple cider (the kind with booze), apple shooters, apple shnaups, apple sauce, and the appletini.

Harmonia tried to win back business by releasing a green grape. Her attempt failed.

Another rival of Discordia is Accordia. Her followers are tone-deaf and are called Accordions.