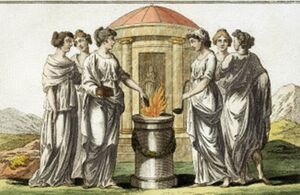 “Anyone fancy a curry?”

Hestia was the Greek Goddess of fire starting and 'First Virgin' of the pantheon. The Romans called her Vesta as she was also a very good making of hot curries, fresh out of a cardboard box. The Greeks and Romans dedicated temples to Hestia who were staffed by female virgins provided for by families wishing to dump their unmarriageable daughters. Hestia's priestess dedicated to the worship and house cleaning of the goddesses temples, a messy and smokey affair as a fire always had to be lit and maintained. The women were expected to wear pristine white dresses and clean underwear at all times and to resist any masculine tempations. If they did and broke their vows, a fallen virgin's fate was to be buried alive in a deep pit and suffocate in tarmac as a chariot car park was laid over the top.

Because of her link to fire, Hestia is also the Goddess of the barbecue and spit roasting. She would also do some 'firewalking' at parties if the wine got the better of her.

For those without comedic tastes, the so-called experts at Wikipedia have an article very remotely related to Hestia. 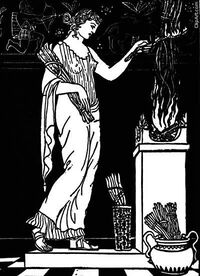 The fire needs to be larger!

Hestia was the eldest sister of Zeus and one of the Grand Olympians. When Zeus overthrow his father Cronus, he wanted to marry Hestia instead of either her other sisters Demeter or Hera. Hestia agreed in principle but then changed her mind when she gave Zeus the news that any child of theirs was destined to become 'the new Zeus'. This also ruled out Zeus's brothers Hades and Poseidon who were covered by the same warning. Hestia would remain a virgin and dedicate herself to her 'inflammatory' hobby.

She got unwelcome interest from Hephaestus, the blacksmith god. Since he needed fire to start up his furnaces, Hestia liked to throw water on his kindling sticks. Hephaestus didn't see that as very funny but he was a god with a very poor sense of humour. 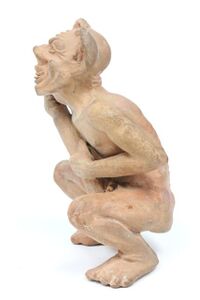 Hestia's example of eternal virginity were adopted by the younger goddesses Athena and Artemis who saw marriage as a loss of power and dignity. This didn't stop Poseidon from an attempting to entice Hestia to break her vows (with him) but she said 'fire and water don't mix'. She did take up massage as a form of physical therapy. One of her regular clients was the God Apollo. The Olympians noted that Hestia was always 'highly flammable' after each session. She was often seen leaving her home afterwards with her hair covered in glistening oil which led to speculation about what exactly went behind closed doors with her and Apollo. Even the all-seeing Zeus failed to get to the bottom of these 'encounters' and thought it wise to turn a blind Godly eye to it all.

Hestia wasn't a killjoy and enjoyed party going, forming an unusual friendship with Priapus. The penis-obsessed god got the wrong idea and attempted a coupling after one evening of heavy drinking. Hestia had passed out and was apparently 'disheveled' when Priapus decided to try his luck. However the sight of the dwarf nudist standing over her gave Hestia a fit of the giggles and she kicked him off. Zeus forbade any more 'high jinx' from Priapus. Hestia took that as a clue to be more 'careful' and from then on, declined to go out much.

The rumour grew that the entire incident with Priapus was instigated by Dionysus, the God of Wine. He was thought of as a minor god and not qualified to sit at the top table. But after the Priapus incidence and Hestia's low capacity for this new 'drug' called wine, Dionysus successfully lobbied that Hestia could retire and spend more time playing with fire. Zeus agreed and to avoid a family punch-up, Hestia left public life and moved to Florida.