For the religious among us who choose to believe lies, the self-proclaimed experts at Wikipedia have an article about Pets. 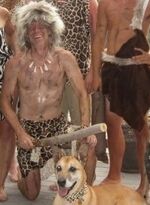 Quite some time ago, hidden in those eons of human existence before we began to record things for posterity, someone decided to adopt an animal. It was probably a Goldilocks choice, not big enough to regard that human as a potential plaything or meal, and not so small that it would blow away in a stiff breeze. If it was anything remotely like the animals we adopt now it was also furry, warm and able to convince its adopter that it was communicating with him or her by staring vacantly at the adopter. Oh, and not too violent. So the first pet came into human society.

It may have been useful, like a vermin destroying cat or dog, but a pet is not required to perform anything useful. Perhaps the first pet was a useful animal that chanced to become useless, but was nevertheless accepted as a useless companion. As in the rough and tumble of unreconstructed nature, once a niche for useless companions emerges, something will evolve to occupy it.

Before we knew it, pets were gobbling up scraps of our food, creeping into our shelters, edging into places of warmth and comfort and transmitting their parasites to us. All they had to do was to give the impression that they enjoyed our company.

As pets became more proficient in the art of winning the protection of humans by pretending to like us, those humans who would have failed to reproduce from the lust-destroying influence of perceiving the futility of their existence were given the illusion of usefulness by adopting one or more of these wily dissimulators. Thus disencumbered of the knowledge of their uselessness, they began to increase in numbers until they may well be in the majority in modern society. Those who have a double dose of the recessive "animal lover" gene, which was formerly lethal, now devote themselves to "animal welfare", a type of Moral Posturing.

As with any other thing that humans think they possess, social comparison soon raised its envious head among pet owners. One could not have any old animal for a pet, and a program of selective inbreeding soon ensured that pets did not have to malinger in their uselessness, for many were now genuinely useless apart from their ability to reflect human affection without actually indulging it. In due time, the antithetic longing for "genuine" animals could be satisfied with the innumerable crossbreeds produced by animals who had little to do save have casual sex when the opportunity presented itself. 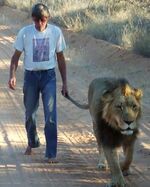 Poorly bred dogs and particolored cats could not entirely satisfy the demand for "genuine" animals as pets. Not only were the common domestic animals bred for viciousness to satisfy the discerning adopter, genuinely wild animals were adopted by those who had taken their formative experiences with the classic novels by Edgar Rice Burroughs to heart. Both sorts of adopters of these animals must occasionally suffer the lethal behavior of their pets upon themselves or their offspring, but this has not materially diminished the demand for such pets. Laws proscribing the adoption of potentially lethal pets in the interest of public health are often disregarded.

As pets rely on their ability to simulate affection and have no desire for autonomy, they rarely display any negative emotion toward their adopters. This renders them greatly preferable to human companions for those sensitive and self-absorbed individuals who cannot bear criticism. Such narcissistic misfits may come to prefer the company of their pets to other members of their families and seek to distance themselves from anyone who does not unconditionally admire them. Low level cases of this disorder are usually basement dwellers, but increasing severity of the condition can result in attempts to murder any member of the family or indeed any person who is not as besotted with their hamster as they are.

Another common problem is sock-puppet-by-proxy syndrome in which the sufferer becomes convinced of the pet's intelligence and enlightened nature. Signs of this include having conversations with the pet in which the adopter takes both sides of the conversation. Unless the pet is as dumb as it looks, this may be quite amusing to it.

Sock-puppet-by-proxy syndrome can progress to species-confusion-syndrome in which the adopter attempts to impose his or her beliefs regarding the pet upon those not so afflicted. The typical outcome of this behavior is ridicule by the mentally sound and the sufferer taking refuge in "animal rights" interest groups. The terminal phase of species-confusion-syndrome often includes bestiality as the sex appeal of the sufferer may be limited.

What can be done about pet adopters?[edit]

While most pet adopters are harmless, they often act as supporters and protectors of their more radical colleagues. When these disturbed adopters sporadically attempt to take out their frustration and inner embarrassment at having been conned by a bunch of smarmy animals upon society at large, it becomes necessary to think of countermeasures.

Some have suggested methods to prevent "radicalization", but it is obvious that the deviant pet adopter is unlikely to respond to reasoned argument. In the absence of a method of identifying fundamentalist pet owners, it is unlikely that we will be able to rid the world of this scourge.