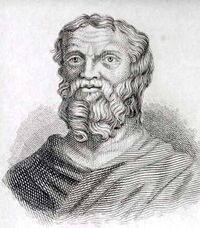 This is the showing-forth of the inquiry into the life and death of Herodotus of Halicarnassus, so that neither what has come to be from this man in time might become faded, nor that his great and wondrous deeds might be without their glory.

The Histories, though The Inquiries or The Researches are better translations of the Greek title[1], were divided by Alexandrian know-it-all editors who were obviously obsessed with mythology[1] into nine books, named after the nine Muses. At its simplest and broadest level of meaning, The Histories is structured as a dynastic history of four Persian kings.[1]

His place in history[edit]

Herodotus announced the size and scope of his work at the very beginning of his Researches or Histories, which means he was a pretentious prick.[1]

As told by other liars[edit]

Herodotus had a tendency to report fanciful information, which earned him the label 'The Father of Lies'.[1] Much of the information that others subsequently reported about him is just as fanciful, some of it is vindictive and some of it is blatantly absurd, yet it is interesting and therefore worth reporting.[1]

As told by other historians[edit]

Modern scholars generally turn to Herodotus's own writing for reliable information about his life, very carefully supplemented with other ancient yet much later sources, since those are obviously much more reliable.[1]

Herodotus provides a lot of intriguing information concerning the nature of the world and the status of the sciences during his lifetime, often engaging in private speculation, since we're all very interested in that stuff.[1]

One of the most recent developments in Herodotus scholarship was made by the French ethnologist Michel Peissel. He discovered that Herodotus' reports of a species of fox-sized, furry "ants" were actually about marmots. Herodotus simply mistranslated the native word for "marmot".[1]