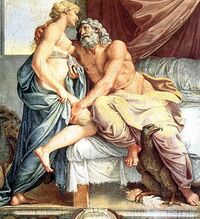 Zeus and Hera getting it on.

The Greek gods were a colourful bunch of deities. Monotheistic religions miss out so much of the fun with their dull one god in comparison. There had a chief executive (Zeus) and a company secretary, (Hera) and another 10 to fill out other positions on the board of Olympus Inc and lot of other lesser gods in more niche roles (like the love twanger Eros) and Eris, the Goddess of Shit Stirring).

There was a branch office in the Underworld run by Zeus's brother Hades with his wife Persephone and the triple faced house crone Hecate . The other brother Poseidon preferred to spend time in the sea with his trident, summoning up storms and unleashing the sea against anyone who pissed him off which was pretty much everyone.

Though Olympus acted like the HQ of the Gods, nearly all of them spent a lot of time on Earth. The female gods were usually productive, imparting wisdom like Athena or supplying her green fingers for horticultural advancement like Demeter. The male gods on the other hand roamed around looking for sex. Nor would they mind if it was male or female. Only Aphrodite as the Goddess of Love had her share of lovers, her sisterhood deities risked black eyes or worse from the male gods who were always jealous of pretty boy seducers or heroic he-men. Not very fair but then Greek society wasn't fair either. Women were treated only one step up from slaves - except in Sparta. God and Man were one of the same when it came to female freedom. They were dead against it.

The Greek gods demanded that you kept their temples and shrines in good order and didn't do anything there that might 'offend' them. This would include supplying a regular catering service of roasted flesh and wine. This food wasn't consumed by the gods as they were preferred to dine on ambrosia and golden apples. But they liked the smell of the food and anyone caught providing dog casserole would be struck down. It was also a bad idea for a priest or priestess who were in charge of the temple to engage in extra activities like use the 'office' as a shag pad. Medusa learnt the hard way when you offended your boss (Athena in her case) and got turned into a snake lady.

The "Anonymous" God (What the?). Theologists agree that sex with the great father of the gods Cronos seems to give him a name when he clicked the "Save" icon in the god-creation program (Crono-Trigger), which saved the file as "Anonymous.god". The .god expression was forgotten through years because it was saved in Charles Babbage's all-analog analytical enjin (which no one knows today how to repair except God).

A group of Gods that, of course, dedicated their eternal lives to par-tay-ing while the world suffered cataclysmic disasters and made useless offers to them. Then Zeus got a headache so an extremely drunk and naked Apollo attempted to face rape him, resulting in the cracking of his head. Thus Athena was born and everything went to Hell.

For those without comedic tastes, the "questionable parody" of this website called Wikipedia have an article about Greek gods.

Once he began to take on some heavenly duties, Zeus was now senile and blind past his nose, possibly the reason why he took up the duty of Erratically Throwing Lightning Bolts In Unconvenient Places. On his free time he still knocked up women, without distinguishing mortals, nymphs, titans and goddesses.

Back to Apollo, though, he was basically very attractive, for which Hera had to tie his disturbing husband to a post for a couple weeks. Apollo was worshipped among the Greeks as the God of Music, Healing, Light, Poetry and Gayness, basically the finest things in all societies. His official duty was Gaying Things Up. Rumor has it that Apollo has assumed the identity of a man named Jack Meoff. This would explain Wilde's immortality and unnaturally high awesome score.

The Geeks, while an offshoot of ancient Greek civilization, ended up developing their own, independent Partynon and shunned worship of the original gods. 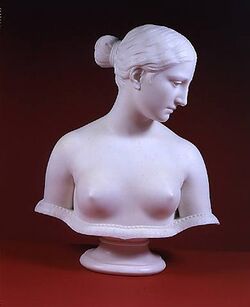 The Titans, also known as "Dose huge thangs walkin´ down da street, yo", were a select group of rather large beings that dedicated to wreaking havoc on the Earth (raping the fields and pillaging women) in order for nothing else to be ever able to live there. Official records claim that they eventually got bored and left the task to the Gods in order to pursue their career as rappers. They reached great fame as the Titans (Big Momma, Recutpac and Time Masta) during the 1960´s, but then humans momentarily stopped smoking crack and everything went to Hell.

Recently, Coldplay admitted to have stolen Clock from Chronos. They also affirmed that Chris Martin will be chained to a rock for a vulture to eternally peck at his liver as punishment starting from December 23, 2012. Prometheus has expressed his happiness regarding the prospect of a buddy he can talk to amidst the pecking. Dear God that sounded wrong.

They became unpopular, when they failed to protect Greece from intruding deities. Later, in the Renaissance, their popularity increased again due to poems and operas. Unfortunately, a new god had conquered the world these years (along with god Oh) and they failed to regain their lost power.