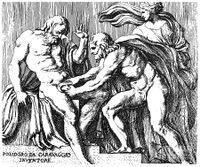 Uranus is 'nobbled' by his son Cronus and wife/mother Gaia.

The Greeks had a god for everything and a statue to celebrate their existence. That is, except for one. The Greek God Uranus after which the the planet is named after. For the Greeks their Uranus was the 'unmentionable one' who was really famous for two things. He married his mother Gaia - Hillbilly style - and then had his bollocks cut off by his son Cronos in a dispute about whose turn it was to get the groceries.

This isn't much of a back story and to be frank, the Greeks didn't dwell to much on this myth except for one unexpected outcome of Uranus's emasculation. His severed penis and testicles somehow impregnated the sea and gave birth to the goddess Aphrodite in all her naked, beach-blonde glory.

For those without comedic tastes, the so-called experts at Wikipedia have an article very remotely related to Uranus (mythology). 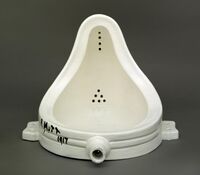 A statue to Uranus's brother Urinal.

According to the Greek poets, Uranus was the son of Gaia and Aether. So that's earth+air. Uranus also had a brother called Urinal who became the god of piss artists. At least Urinal kept his organs intact - unlike brother Uranus. Urinal was wind+piss=Marcel Duchamp.

Since Aether was always out blowing a gale, it was upto to Gaia to look after her boys. Aether eventually moved out and floated around the world. Gaia said she wanted grand children and therefore took her sons to bed to produce the desired outcome. From this union (several actually), Gaia gave birth to a muscular set of Titans and Titanesses. She also produced quite a few monsters as well, brought to life perhaps in some bad tempered conjugating. The monsters were stuck in a dark hole by Uranus, a decision he made without consulting his mother/wife.

As her Titans grew up into good looking boys, Gaia naturally switched interest in her new brood. Urinal spent all his time pissing so didn't seem too bothered by a lack of motherly love but this wasn't the same for Uranus. He became jealous of his mother and their sons. He felt that in time Gaia would get bored of him and shut him out of her life like he did to his floaty father. Moreover, there was a chance Gaia would start breeding with her grandsons.

Quick! The Nipple Watchers from Fandom are watching this page.

To avoid this fate, Uranus locked up all his sons, monsters and assorted beasts in hell. He hoped by removing all these distractions, he could re-new his relationship with his mother but this time would wear protection to prevent any more monster mothering. Gaia for her part outwardly agreed with this arrangement but then got Uranus drunk one night. She sneaked off with the keys to hell and asked her sons to avenge her. None would step forward except Cronus. He agreed to do it. Gaia gave him the gardening shears to undertake the mission.

Cronus found his father naked on a bed. With one savage cut, he removed his father's family jewels and then threw them into the sea. Whether Uranus 'died' there and then or grew fat and hairless like a eunuch isn't recorded. He just appears to have 'disappeared' though his severed junk when on to produce Aphrodite.

The Romans took up the Uranus myth and identified it with their god Caelus. They didn't really improve on it much except to say that the two faced god Janus was a son of Caelus/Uranus. Perhaps that was a subtle Latin joke!

Fast forward many centuries and in late 18th century England an astronomer discovers a planet on an orbit outside Saturn. The astronomer William Herschel wanted to call the planet 'George Star' - in honour of King George III. However other astronomers (especially in the newly independent USA) preferred a different name. Since the nearest planet to 'George' is Saturn, why not call this new one 'Uranus'. It's agreed - though why anyone wasn't aware that calling a planet 'Your Anus' wouldn't get generations of astrophysicists laughing into their beaker jugs shows just how out of touch these egg heads were.

For those without comedic tastes, the so-called experts at Wikipedia have an article very remotely related to Uranus (mythology).