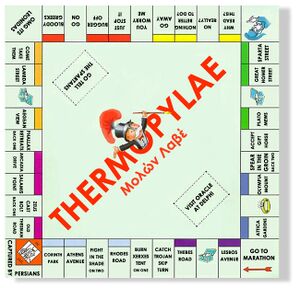 Thermopylae was the top selling board game of the 5th Century BCE. Players compete to acquire wealth through stylized politico-economic activity involving the buying, rental, and trading of real estate using fake drachma and bartering. Players must also gather groups of Perioikoi and Helots to work your land and invade the land of your neighbours as they take turns moving around the board according to the roll of the dice.

Thermopylae was also a famous and influential precursor to such classic board games as the British Jingo and the German classic Holocaust Tycoon. It has many similarities in game play and design to the modern board game Uncyclopoly.

First published by the Sparta Brothers in 480 BCE the game was an instant success, taking over from nude wrestling, democracy, and the violation of young boys as the number one pastime throughout the Hellenic world. The aim of the game is to form your own city state, complete with the latest advances in technology and forms of government, while at the same time crushing those of your neighbours.

With any game of chance winning involves a great deal of luck and/or divine providence. Players would often erect altars, offering votive gifts in the hope of receiving benevolence from friendly tutelary spirits. Die-hard fans of the game have been known to sacrifice goats and even infants in hope of achieving a beneficial role of the dice. Castration has even sometimes reared its head (as it were) in particularly vicious bouts. 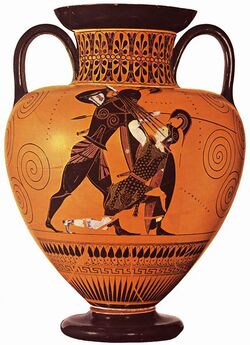 For those without comedic tastes, the so-called experts at Wikipedia have an article about Thermopylae.

Although Thermopylae is considered a game of skill, the game involves a substantial amount of luck. Whimsical fortune assists or limits the actions of the player, whilst good use of key squares works as a force multiplier, often allowing players with stretched resources to hold out against much stronger forces.

The game features a number of “special rules”, including the facility to:

Each player is represented by a small pewter token which is moved around the edge of the board according to the roll of two dice. These were traditionally a Plumed Helm, a Trireme, a Sandal, an Amphora and a Chariot. For some reason nobody ever wants to be the Sandal.

Certain squares allow the player to chose a Deus ex Machina Card, the outcome of which may positively or negatively affect your situation. Cards may include: Death by Thunderbolt and Gift Horse. Another square allows for an Oracle Card to be chosen, which cryptically reveals to you any future outcomes that your current decisions may lead you. The Oracle's counsel however, often takes the form of self-fulfilling prophecies which doom the more stupid players.

Over the years a number of exciting Championship Games have taken place involving some of the top gamers of all time. One of the most infamous games involved the then GrandMaster Xerxes who had regularly won the Asian Championships, as had his father before him. During the 480BC Championship he came up against the loud and bombastic Leonidas, Champion of the Hellenic League. The game is best remembered as a long, strategic affair, with Leonidas holding back Xerxes' attacks for three days, before ultimately losing.

As recently as 1941 saw a World Championship Match between two superpowers of the game. Hyped as a grudge match following a recent contested contest, this match only lasted for 24 hours, before the Allies Champion Baron Freyberg knocked over the board and left for Crete. The Germans claim to have won remains unconfirmed. 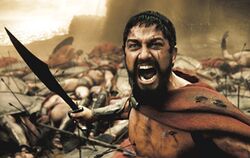 Thermopylae quickly gained a following among the regulars and patrons of the Hellenic worlds many seedy back-alley dives. The fast paced, often bloody nature of the game lended it to high stakes betting and competitive play. Even individuals normally above reproach, such as the father of modern democracy Pericles, once lost ten prostitutes and thirty slaves in one drunken session, having become so enamoured with the game.

Probably the greatest loss ever seen in on a game of Thermopylae was when Persian GrandMaster Xerxes (famously large, golden, and piercing-adorned) put up his entire fleet on a single roll of the dice. When things did not go his way, he went back to his home land of Persia a broken and defeated king, who could take solace only in opium, lurid sodomy and Broderbund platform games.