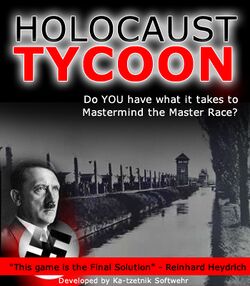 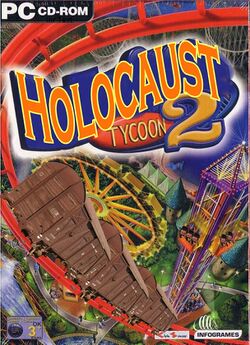 For those of you who don't want to be offended beyond belief, the so-called experts at Wikipedia have compiled a tamer article about Holocaust Tycoon.

“The most fun you can have outside a Gulag!”

“Dear God! How horrible, I can't believe how fat I look compared to these people! We should share diet tips...”

“This is more fun than Disneyland!”

Holocaust Tycoon is a simulation computer game, released for Windows XP and Wii platforms in 2006. It was developed by Ka-tzetnik Enterprises in Berlin, and later released throughout Europe by WN Software. In Holocaust Tycoon, the player must successfully manage a camp, without going bankrupt, whilst avoiding the attention of invading Allied Forces.

The player begins with nigger tits + alcoholic beverages in an empty plot of land, levelled and ready for development. In the early stages of the game, the player will build his camp, adding huts, arranging for political opponents, enemy aliens, specific ethnic or religious groups to be transported in, and the construction of (initially experimental) gas chambers. As with most games of this genre the early development is the most important stage, as the structure of the camp is crucial to its survival. Controversially, players are encouraged to cram as many people into huts, to heighten profit (refered to in-game as 'death toll').

Eventually, as the camp develops, more options become available. For example, the player must then negotiate contracts with various loyal companies, such as gas providers, freight rail and allied computer companies (Apple is available). The object of this game is to build an organised and brutal camp, allowing your Commandant promotion whilst gaining the love and appreciation of the Master Race.

Although primarily a strategy game, the game contains a few action-oriented "mission sequences". Verlassen Verboten! is a first-person shooter in which the player must prevent camp residents from climbing the fence or tunneling. In Trash Day, the player must keep the disposal units running under an increasingly heavy stream of biological waste. 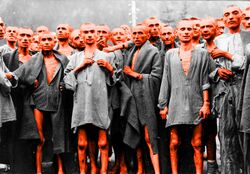 Punters form an orderly queue to acquire Concentrated Orange Jews. Just one mug contains 100% of a punter's recommended daily intake of Zyklon B. From Uncle Auschwitz!

These are the basic units in the original Holocaust tycoon. 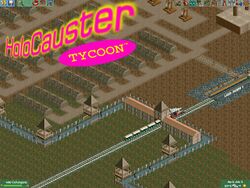 Holocaust Tycoon in its early development.

Over time, a camp may develop and expand according to economic factors and the development of new industries or medical breakthroughs.

During the 2006 Tournaments Siegfried Mengele (grandson of) surprised his foes by using a doctor-boom. The idea of a doctor-boom is to have a small army which eventually leads to a few prisoners escaping, but is cheap enough to have plenty money for doctors and have access to cruel biological weaponry quickly. A more commonly used strategy is the one called “Arbeit macht Geld” in which the destruction of Jewish prisoners is held off as long as possible. Instead they are used to drain money by scamming other prisoners, after which the money is confiscated in exchange for a longer lifespan.

Prisoner types have both advantages and disadvantages which increases the complexity of gameplay:

Arbeit McFries, in case your units gets hungry due to the heavy labors the game features. Preferably served with a shower and a pinch of Zyklon B.

Fortunately the game does not come with many easter eggs, since the Jews have never believed in Easter, the Easter Bunny, chocolate eggs, Jesus, and the hypothesis that Arabs may be human too.

Due to the success of the original game, an expansion pack was released in February, 2006. It was called Holocaust Tycoon: Siberia Teaches. In it, the player has to establish a camp in the heart of the motherland (The Soviet Union).

The expansion also included some new gameplay including: political prisoners (they give a very big score but are hard to obtain), 3 new first-person shooter maps ("For the motherland!!!", "Who called Stalin evil?" and "The capitalists are escaping!") and the ability to expose prisoners to the national anthem of the Soviet Union (like a gas chamber but faster). To complicate matters, camps must remain highly productive at all times, and Stalin must take none of the blame. While peasants and factory workers may be worked to death in your mines, other prisoner types such as aerospace engineers must be kept comfortable while still being forced to work under threat of death. Another aspect that complicates gameplay is that each of the player's units tries to denounce another one from time to time, or forces another unit to denounce a third one. Every time this happens, at least one of the units involved is executed immediately without adequate replacement. More advanced units (e.g., secret officers, political officers and party secretaries) are more likely to suffer from this fate. During later phases of the game, the player will thus notice a severe lack of high-level units, especially those with veteran status.

At the end of the game's lengthy campaign, the player will receive an invitation to Stalin's office. Stalin then orders the player to be eliminated due to "lack of efficiency". Nobody knows what were the people at Ka-tzetnik Enterprises thinking, but he refuses to tell anyone else, although God is currently looking into the matter.

In the new expansion pack the player goes beyond controlling a camp in some desolate country to controlling a desolate country. The gameplay gives unprecedented freedom for a video game. As the Minister of the Interior, the player can conduct propaganda campaigns to inspire people to work harder for less food, increase agricultural output by adding paper to bread dough, invent new methods of torture, and use secret prisons to re-educate dissidents by beating them with bamboo sticks. However, most importantly the player has to make comforts available to the Dear Leader to keep him occupied to prevent him from giving on-the-spot guidance. Electronics such as iPods and computers are very effective. If the Dear Leader is not occupied the player has no choice but to follow His idiotic advice. This will result in a disaster for which the player will be blamed for and punished by the Dear Leader.

The reviews for the game were quite good:

Despite the fact that Holocaust Tycoon got mostly positive reviews, it has not sold well on the Western market. However, it is a record-breaking seller In Saudi Arabia, Iraq, Lebanon, Iran, Afghanistan, and Pakistan in spite of the fact that half of those countries are having civil wars and none of them has more than 4 computers.

As inmates are killed off, the number of visible colours will dwindle until the game becomes monochrome.