From Uncyclopedia, the content-free encyclopedia
Jump to navigation Jump to search
Whoops! Maybe you were looking for The Simpsons, or American Dad!? How about The Cleveland Show?

“I can't believe you slept with Quagmire AND Cleveland, Lois! This is worse than the time I swallowed that giant blimp!”

For those without comedic tastes, the so-called experts at Wikipedia have an article very remotely related to Family Guy.

Fox needed a replacement adult animated sitcom to replace their aging flagship franchise, so they injected Simpsons DNA into McFarlane's student film The Life of Larry and Larry & Steve while still in the developmental stages of becoming a series. The resulting chimeric life form, code name project Family Guy, was canceled thrice, but returned in 2005 due to high DVD sales and popular demand among college frat-boys, and continues to make the highest quality rape and child abuse jokes to this day.

While the first three seasons of the show were mildly amusing, the later ones are sub-par and often leave you wanting to jam a loaded shotgun in your mouth. The show recently received a TV-MA rating, in the hopes that 96% of the fan base would go to bed after the watershed and deter the show. Unfortunately, like pancreatic cancer, it refuses to go away, and the critics haven't stopped it from pulling in ratings, making Seth billions, and spawning a line of cheesy merchandise.

The show's concentration of jokes and storyline.

The series centers on the Griffin family, a dysfunctional family who live in Quahog, Rhode Island and are totally not like The Simpsons.

Each episode of Family Guy is remarkably low on story, but high on random, irreverent humor. The majority of the humor in the show is a patchwork of 1980s cultural references that appeal to Gen X-ers who grew up in that particular decade and are indeed aware of it transpiring in a similar fashion to how their childhood was. The rest of the humor consists of cutaways, celebrity-bashing, suggested rape, swearing, farting, violence, and nudity.

In the show's great tradition of jokes that go for way, way, way too long, in the early episode "Da Boom" there was a 3-minute-long cutaway where Peter fought a giant chicken. For some reason, Seth thought this "joke" was comedy gold, so he bought it back several times and it now comprises about 40% of the show's content. It is so popular, in fact, that it has an entire DVD committed only to showcasing the battles.

Anthropologists note that the shows primitive art and writing style is indicative of homosapians first development of figurative representations on the sides of paleolithic caves.

One night in 1995, Seth MacFarlane, a student at the Rhode Island School of Design (RISD), was joking with his roommates about wacky! and dated! '80s pop culture that they grew up with. Hey guys, remember ThunderCats? How about The Facts of Life? He got a brilliant idea: poorly congeal Things We Remember into a cartoon. MacFarlane pitched his idea, titled Larry & Steve, to Hanna-Barbera at Cartoon Network and created a pilot short. However, he left the network after discovering that even kids were too intelligent to enjoy his work.

MacFarlane retitled the show Family Guy, added a dash of fart jokes and swearing, and began work on a pilot. The pilot took his production company, Seth's American Studios (SAS), eighteen months to create. The process was long and tiring, as the studio wasn't air conditioned and consisted only of a chair, MacFarlane's sleeping bag, and a Windows NT workstation.

Once the pilot was finished, MacFarlane pitched it to Fox. Executives were very impressed by the show's formulaic cutaways, and between that and the simpler faster art style it looked like Fox had found the McDonalds of cartoons, so Fox greenlit it for two seasons.

Fox decided to cancel Family Guy in 2000, due to the fact that nobody was watching it and reviews were positively scathing.

But. Fox made a last decision to renew it for a third season in 2001. By 2002, further abysmal ratings caused it to be cancelled. Again.

Then, Adult Swim brought the show back through syndication, and aired one "banned" episode in 2003. Then the show ended, a third time, for good...or not.

Fox released seasons 1–3 on DVD all over the American Empire, which were an instant success with the 18–24 year-old college frat-boy/stoner demographic. This convinced executives to renew the show for a fourth season in 2005, and it thrives to this day.

Family Guy has had over 250 episodes and 15 seasons, and they can be summed up as such: 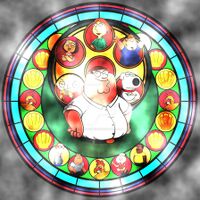 Peter: So, this is Atlantis, huh?

Peter: I've heard all the Mermen here are gay. Is that true?

Peter: Look out! A monkey!

So far, there have been only three Family Guy movies. The first movie is about Stewie going into the future to learn that he's gay. The second movie was a carbon copy of Star Wars Episode IV: A New Hope. The third film is a carbon copy of Star Wars Episode V: The Empire Strikes Back. MacFarlane plans on making a carbon copy of the sixth movie, all the Indiana Jones films, and a movie about abortion, but says that he simply doesn't have the time at the moment, considering he has to swim through piles of money ever day, like Scrooge McDuck.

A theatrical Family Guy film is planned for sometime in the near future, which will be followed by Family Guy On Ice.

Family Guy retains a strong fandom, which consists mostly of loud, stoned college kids who chant quotes from the show like mantras. Some of them will excuse the fact that the show is 80% fart jokes by prattling on about its excellent post-modernist commentary. If you were to insult Family Guy to a fan, said fan would likely rant on how much you "Have no sense of humor", and how "You should like Family Guy. Why? 'Cause it's funny, dude!"

Numerous critics have argued that Family Guy is a mere ripoff of The Simpsons. And they'd be right considering both shows feature a lovable idiot, his busybody wife, a loser son, a daughter who hates him, and an intelligent baby. South Park has repeatedly attacked Family Guy, arguing that its writers are manatees who use "idea balls" to create plotlines. Although Bob's Burger's has recently eclipsed Family Guy both in number of 80's references and fart jokes, don't worry about a fourth cancellation, because after 15 seasons Family Guy is going nowhere, and going there fast.