Animation is the illusion of motion created by flashing multiple still images before the viewer. The viewer’s brain assembles the images in sequence to send the message:

The earliest examples of animation are the prehistoric cave paintings of Cantabria, Spain. These simple works required the viewer to blink his eyes really, really fast. Animation from this period recorded scenes of everyday prehistoric life such as men standing around, dogs sleeping, or dead mastodons.

By 400 BCE in Han dynasty China, Mozi discovered the Camera Obscura, and combined it with painted glass, inventing the Magic Lantern projector and anime. These first animations were stored in massive temples with scholars and artists working for years on an individual piece a second long, containing even fewer frames than Sailor Moon. Sadly, these works were extremely fragile and prone to breaking as peasant mobs smashed them for containing demons. Hundreds of original masterpieces were lost forever in the ensuing infernos. Also at around this time Aristotle used animation to aid Alexander the Great with illusory UFO air support in his invasion of India, though great for sneaky spy stuff done at night, the battlefield applications were limited when someone bothered to look down and see they cast no shadow or saw the rain, smoke of a falcon pass clean through them. Shao Ong, kept Emperor Wu of Han contented by bringing back the ghost of hid dead concubine in 100 BCE; in what was history's first recorded use of hentai.

Jump cut to the 7th century Byzantine empire where animation helped Anthemius of Tralles fill out the auspicious gold glass interior of the Hagia Sophia with a dance troop of angels that could fit on a pin. Alkindus would do the same thing but added Genies in the 9th century; unfortunately he got caught drawing Lolicon instead of marrying them putting an end to his animation career; luckily he had like a dozen other things he was good at. By the turn of the millennium, Han Chinese otaku Shen Kuo and Arab otaku Ibn al-Haytham rediscovered the lost art, but were wise enough to keep a tighter lid on it after seeing what happened to their predecessors. By the 14th century, Roger Bacon and Arnaldus de Villa Nova saw it as old hat compared to their Brazen head anime chick figurine busts.

Muybridge photographed this man walking, who woke up that morning as a roach

In 1872 Eadweard Muybridge invented a system of capturing multiple photographic stills of walking subjects that could later be played back in sequence. These stills were mounted at even intervals in a cylindrical device called a “Ferris wheel”. A viewer would peer through a small slot and the photos would appear to move. Audiences were so astounded, that Muybridge would often be chased out of town by angry mobs, and was eventually burned as a witch in 1904.

In 1928 Walt Disney created the iconic character, Mickey Mouse, which he named after the famous Yankees baseball player, Mickey Rourke. His early success lead to the founding of the influential Disney animation studio. The studio was renowned for creating the best animated features possible and for its enlightened business practices. The studio was the first American corporation to institute the 40-hour workweek, offer full health benefits, and provide only Fair Trade snacks in its cafeteria. The studio was also famous for allowing entry level artists creative input on large scale projects. Jane Lopez, an early Disney artist was quoted, “It beats picking avocados.” 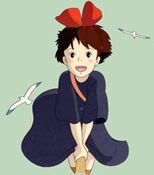 Hayao Miyazaki is a small-time director considered by many to be Japan’s Disney. His epic masterpiece, Nausicaä, portrays a plucky adolescent princess trying to stop a war in an ecologically dying world. American animation geeks may also be familiar with his more popular children’s film, My Neighbor Totoro. This film depicts the friendship between a tall, overweight businessman and two plucky adolescent prostitutes with hearts of gold. Many of Miyazaki's films star adolescent girls and explore ecological themes. In fact, Miyazaki is single handedly responsible for creating Japan’s obsession with Asian school girls as well as pushing through the ill-conceived Kyoto Protocol.

The invention of the computer gave animators a new toolset to explore their visions. Modern computer generated images (CGI) are also known as .GIF animations. GIF is an acronym for Gratuitous Imagery Format and can be recognized by clogging up most webpages with little dancing critters and logos. Rendering GIF files requires huge “render farms” and massive processing firepower.

Superior examples of computer animation can be found in the Pixar films Cars and Finding Nemo. These films are created entirely of GIF animation with Adobe ImageReady. Computer generated images are ever so advanced, and is getting more advanced as we speak. Look at this music video made with the latest computing available. File:Dire Straits • Money for nothing (1984)

The first interactive computer animation was made popular by the 1971 video game Pong. Pong was a complex 2-player quest game involving multiple puzzles and lush environments, based on Sophocles’ Riddle of the Sphinx.

Today, computer games are a giant industry, with programmers and artists working days or even weeks to get a successful game on store shelves.

CARTOONS RULE, THEY DONT PENCIL, NOR DO THEY SHARPEN, THEY RULE!!! <3[edit]

Saturday morning cartoons were a staple for children growing up in the 60’s, 70’s and 80’s. With the arrival of cable, entire networks became devoted to cartoons and children’s programming. (Cartoon Network, Nickelodeon) The cartoon audience became dispersed; cartoons lost popularity, and, by the year 2000, cartoons went the way of the daguerreotype.

Is really hard. Claymation is so hard as to be considered impossible with today’s technology. Some theorists believe that claymation may be possible in a nanotech future. Certain "claymaters" like Ladislas Starevich have reached marginal considerable success, but they are generally disliked by society.

Adobe's introduction of the eased keyframe changed the course of history.

Unlike traditional cel animation, animating the dead requires the military chemical 2-4-5 Trioxin to be distributed as a fine mist over cemeteries, battlefields, or mass graves with a crop duster or similar device. The resulting zombies, zombie plants, and kinky zombie girlfriends are soulless, eating machines, craving the human brain; don't be fooled by their ability to speak perfect English.

Level 3 Clerics can also animate the dead, depending on the number of years at art school. Miskatonic School of Fine Art and Design is the only accredited university in the US that offers a degree in animating corpses.