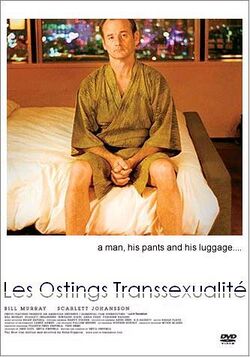 For those obsessed with so-called-experts, Wikipédia has an article about:
Lost in Translation.

“Did those fucking French just call me a transvestite?”

~ Steve Austin on Lost in Translation

~ Noel Coward on Lost in Translation

~ Biggles on Lost in Translation

“We knew that two films rob the site of the Web, of which the material we well Integra.”

~ Oscar Wilde on Lost in Translation

Lost in Translation (established the same year as Uncyclopedia) is a film starring singer Amérie and actor Michael Caine, shot in Sofia, Bulgaria, directed by Francis Ford Coppola, sort of spoken in reverse English language and first released in an outdoor screening (with a roof) for 29 people in 2003.

The arguments against Memento

The fact that Bob Harris (actor Bill Murray)'s ass was shown (according to Uncyclopedia and also de.Uncyclopedia) in the median part of the film, with quacks added to it, saw an encounter in Tokio between a paranormal Israeli Zionist Photographer and the publishers of the film.

After they had asado steak in Peru or The Soviet Union and a Marmite and had a laugh over an double entendre joke in the English language from Uncyclopedia while stuffing their faces with a Buri fish a-la menth, it kinda worked itself out.

There were apparently also some aguments against the makers of Memento and a promise to win an Oscar.

The Hand and lung scandal

The ways critics reacted to the film were mixed: One described it "An American canker in Tokyo: Don't dare to watch this film, it's like mud. Action-star Bob Harris' wrist was made for cutting. Don't watch this while eating Japanese nachos, umm... better eat dirt and stay sane and verbalized than see this pop-retarted Wiskey-drunk warbling tzar verbalizing like a zoo-caged Ben Stiller."

There was also some sort of a scandal regarding the film's preview, which included a German, alto singing opera bear holding a lung and also an Englishman hung from his testicles, with an Aushwitz Reich nun with a penguin underneath him. This was solved with some simple Weblinks (possibly some crazy German effect that causes us to blink faster so that we can't see for a few days, don't ask me). 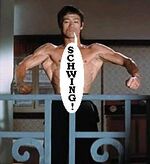 This deleted scene appearently shows Bruce Lee swears at the sight of Scarlett Johansson's butt. It was originally the first event of the plot but was eventually left out of it because "it's background was too blue", according to Japanese writer Zijn Twee.

The film as marketed in the Netherlands goes under the Waarschuwing! and Bijzonderheden! ratings. These two qualifications were added by request of the Dutch Government, who are especially concerned that minors could be unintentionally exposed to material which could be, as they express it, "less fit to be viewed by children of a certain age".

In fact, the protection of minors goes a long way in Holland. Compare the rather spicy back-cover text of the English DVD edition:

to the much watered-down Dutch cover text (you might want to run this through a [Bible Fish] in case you are not fluent in that language):

Now while this might be construed as not exactly telling the truth and the whole truth, one must admire the concern that the Dutch have for not shocking others needlessly.

The Chinese DVD release also includes instructions for a Bilingual pun, which is a traditional pre-watching ritual that usually starts with asking someone like Bai Ling out, and ends with getting hit on the head with a Chinese war pan. Although considered vulgar today, it is still commonly used in modern society, and Germans even use it in jokes involving numbers (although studies have shown that only 3 German jokes are known, that a total of 9 Germans can actually tell jokes, and that 4 of 6 with any German person is justified). In France, people like to combine bilingual pun with sex, as the woman yells "Oui, oui" while the man aims his penis at her and uses it to fullfil her desire.

Zionists: request zionist rival, or a dull tattoo before seeing this part, or you'll be traoumatized by Alessandro Del Piero.

This film suffers from ill recounting with the control room, which makes everything seem a bit distracted, and in Unyclopedia there's some great articles about algebra. it was filmed in Tokio, which makes it a giant pun.

In Soviet Russia, Lost translates YOU!!

For those obsessed with so-called-experts, Википедия has an article about:
Lost in Translation.

Сюжет. Should we say more?

For those who are too Lost to continue, Wikipedia has an article about:
Translation.

Bill Murray as Bob Harris, is stranded in Japan, where everyone speaks in engrish. Although Engrish is almost 100% ununderstandable, Bob becomes increasingly frustrated by the use of long 5 to 6 paragraph phrases instead of single nouns and verbs inherent in all Engrish, one moment is as follows:

Bob Harris : Can you tell me where the post office is?

Japanese woman: It enters into the shed where the post office goes to intersection left side, exactly around the blue office building, is there and/or ages.

Bob Harris : What the fuck? Say it again, slowly.

Japanese woman: In the shed... which goes to the left side of intersection...exactly around the office building...where the office is blue... it is there and/or and/or it ages enters.

Bob Harris : Look, make some sense please.. because I'm a good man, really, and I don't want to kill you in a fit of uncontrollable rage, ok? Let's try again.

Japanese woman: With the shed around the office building where the post office where it goes to the left side of intersection is blue, exactly, as for that there is there and/or and/or it enters, it ages.

Bob Harris : Wait a minute that didn't sound like the first OR second time, which didn't make sense either, (sighs) Someone kill me.