“When the television audiences are tuned in, everything will appear as it truly is - pure drivel.”

Paradise Lost was an American television coma (comedy-drama) broadcast on the Fox Network in the Untied States and everywhere else Rupert Murdoch’s steely, koala grasp is felt.

The series, created by John Milton, Shakespeare of the Puritans, ran for twelve episodes over a single season before it was abruptly cancelled despite critical acclaim and plenty of gratuitous cleavage. The assumption has been made that it failed because of an incoherent script, but scholars claim that it was just too literate for the general population. 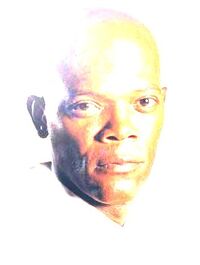 The role of God was nearly offered to Laurence Fishburne, but it was decided that Samuel L. Jackson is not only more angry, he's also naturally shinier. 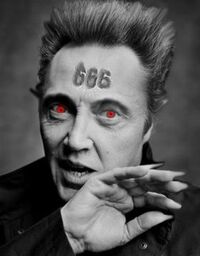 As evidenced by this publicity still, Christopher Walken's portrayal of Satan was quite subdued.

Two competing resort destinations, Eden Beach and Pandemonium, are locked in an unending battle for tropical supremacy, eternal revenue of the tourist's soul and the proliferation of citrus smoothies, dividing Paradise Island and exploiting its pristine conditions.

Adam and Eve, a young and morally ambiguous jetsetting couple, arrive on Paradise Island and are immediately snatched up by God and whisked to Eden Beach. Initially impressed by the majestic facade, the pair soon learns that with God every silver lining has a storm cloud of corruption as His authoritarianism runs amok. Can their vacation be salvaged under the rule of such an oppressive host or will they fall to temptation and relocate to Satan's hedonistic resort? This much is known -- misunderstandings amass, clothing is shed and hilarity almost certainly ensues. 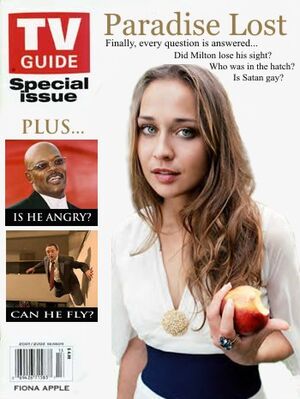 Considering the lukewarm ratings generated by Paradise Lost, it seemed ill-conceived to attempt the creation of a spinoff, yet witlessness never stopped Fox. This time, the story followed Jesus and Satan as they moved from Paradise Island, now decimated under the weight of capitalism, to The Paradise Arms Apartments in New York City. Lasting only four episodes before its inevitable cancellation, Paradise Found saw this pair argue their way through a series of misadventures, many of which could be construed as zany. There was the incident with the broken conveyor belt at the chocolate factory - who knew Jesus could stuff that many candies into His cheek, only to turn the other cheek and cram in even more? Or Satan's dinner party - inebriated guests nearly rioted when the food and alcohol ran out, forcing Jesus to work his magic and transform their pet koi into sushi and the toilet into a fountain of beer. How about "The Dare", in which Satan and Jesus goad each other into increasingly dangerous situations, eventually leading them to the top of The Empire State Building... c'mon Jesus, betcha won't jump. And the unforgettable camping trip... forty days in the desert, Jesus just keeps on muttering something about "spiritual thirst" and Satan eats a peyote button and starts chasing an elusive blue roadrunner that only he can see. "Mheep mheep" indeed.