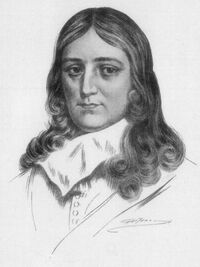 John Milton (9 December 1608 – 8 November 1674) was an English poet, essayist, linguist, and political activist, best known for his epic Judaeo-Christian poem Paradise Lost. Since his death in 1674, Milton’s life and work has been the subject of much debate, mostly because much of it is self-contradictory and makes no sense. Indeed, scholars are hard pressed over whether to consider Milton one of history’s biggest assholes—his contempt for rhyming, contemporary poets, the Anglican Church, the Catholic Church, all three of his wives, all three of his surviving children, and the institution of marriage was legendary—or one of history’s biggest losers—which his virginity into middle age, failed marriages, perpetual unemployment, untimely blindness, and mooching off his father can attest to him being.

Milton was born in 1608. As the eldest son of a well-off scrivener, his early life was one of relative privilege. Despite his advantages, however, Milton was a notoriously difficult child. His father’s surviving correspondences contain many anecdotes concerning the future poet’s many temper tantrums. One such account, taken from the decidedly partisan biography John Milton: Acrimonious Asƒhole (1702), reads:

Milton’s notorious temperament would continue into his adulthood. 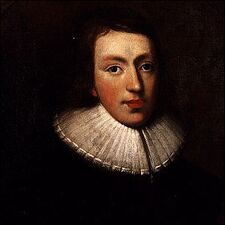 John Milton, “the lady of Christ’s College,” in his youth.

At the age of 16, Milton’s father sent the future poet to Cambridge University to study. The hitherto-sheltered Milton did not adapt well to University life: he got along poorly with his classmates, and was often mocked by them. Indeed, Milton’s long curly locks, silky-smooth skin, fair complexion, prissy mannerisms, prudish nature and alleged vagina earned him the nickname “the lady of Christ’s College.”[2]

Milton was also a notoriously shy student. While his classmates enjoyed Cambridge University’s famous 1620s’ night life, Milton would spend his nights sitting alone in his dormitory studying and writing poems about the joys of chastity and abstinence. One such poem, a sonnet, survives from the time. It reads:

Milton would hold on to this attitude of abstinence—and his virginity—until his first marriage at the age of 35.

For those without comedic tastes, the so-called experts at Wikipedia have an article about John Milton.

After graduating from Cambridge, Milton took to work on many minor poems, and entertained aspirations of being the the English language’s greatest-ever poet. To help fulfil these aspirations, the now-mature Milton moved back in with his parents after graduating Cambridge. Milton did little to contribute to his family’s financial situation, though he did write poems regularly. When Milton’s father—now well into seniority though still working—asked the budding poet to contribute some sort of rent, Milton produced the creatively titled “To My Father,”[4] in which he thanked his father for paying for everything, and then claimed that his father would live forever in the words of his poetry. Milton’s father would never again ask the poet for rent.

The stress of Milton’s responsibilities eventually became too much for the young poet to bear, and he decided to travel throughout continental Europe at his father’s expense. Though he stayed chiefly in Italy, he also went through much of France, and met many of the continent’s foremost intellectual and literary minds. When Milton returned to England in 1639, he was met with news that London was ravaged with the plague and that his best childhood friend, Charles Diodati, and his mother were dead. 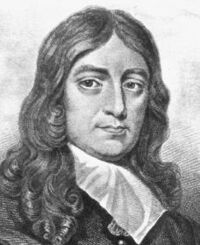 The still-virginal poet in his middle age. Note his joyous expression, ostensibly stemming from his continued chastity.

The late 1630s had taken Milton’s mother and best friend, sending the poet into a fit a depression that would last the rest of the decade. Inspired by these tragic losses, Milton composed his best-known poem not containing the words “Paradise” or “Agonistes” in the title, “Lycidas,” to commemorate the death of Edward King, an acquaintance of his from Cambridge that he barely knew who had also died.

Despite the death Milton found himself constantly surrounded by, the poet also found love during this period. In May of 1642, Milton’s father sent him out to collect an overdue debt—when his son returned a month later, he was married to the debtor’s daughter, Mary Powell. The 35-year-old Milton and the 16-year-old Powell remained happily married for nearly a month before Powell left Milton’s household to return home to her mother. Most historians believe that the split was caused because of political differences between Milton and Powell—the poet was a strong supporter of Oliver Cromwell, whereas Powell had come from a prominent Royalist family—though others have put forth an alternate theory: the middle-aged Milton simply creeped the shit out of the teenaged Powell.

Milton, though separated from his wife, was legally unable to pursue another relationship because the two were still technically married. This inconvenience led the poet to undertake one of his most well-known series of prose works—his four divorce tracts. The tracts—increasingly paradoxically titled The Doctrine and Discipline of Divorce, The Judgment of Martin Bucer, Tetrachordon, and Colasterion—were met with universal revile, and led to Milton being personally and officially condemned in a sermon held before Parliament.

Milton’s official condemnation eventually led him to write and publish the succinctly-titled Areopagitica: A speech of Mr. John Milton for the liberty of unlicensed printing to the Parliament of England—more commonly known by the shorter-though-still-confusing title of Areopagitica—in 1644.

Milton’s impassioned argument against censorship, Areopagitica is considered the greatest politically motivated pamphlet ever written. In it, the poet argues that books are better than men, and then that actually books are no better than men and are harmless, and then that books actually possess great power but that that’s actually a good thing, and then that even Catholics should be allowed to publish at will, except not really. Perhaps no quote better captures the spirit of Milton’s Areopagitica than this one:

Areopagitica cemented Milton’s reputation both as a supporter of free speech (and the new republic) and as a verbose man of letters, leading him to be hired by Cromwell’s government to serve as the Secretary of Foreign Tongues. Most of Milton’s responsibilities at his new lofty position involved translating foreign correspondences to and from Latin, though the poet was also tasked with both censoring anti-government literature and creating pro-government propaganda, two things that flew right in the face of his celebrated Aeropagitica, though Milton evidently didn’t care very much.

Milton during the best years of his life. Note his joyous expression.

Mary Powell, being a woman and dutifully illiterate, never read Milton’s divorce tracts, and returned to the poet in 1645. The couple lived comfortably on Milton’s new government salary, and would have four children together during this period: three daughters that survived into adulthood, and one son, named John, that didn’t. Mary Powell herself would die in 1652 following complications caused by the birth of the couple’s final child, Deborah.

As the 1650s wore on, Milton was beset by a string of tragedies almost humorous in their succession and magnitude: in 1654, Milton was stricken with glaucoma, which would come to completely rob the poet of his sight in just a few years; in 1656, Milton remarried to a woman named Katherine Woodcock, though both she and her and Milton’s newborn daughter both died within a few months; in 1658, Oliver Cromwell died, taking England’s republican government and Milton’s only-ever viable employment with him. This string of misfortunes sent the poet into a long bout of crippling depression and malaise which caused him to abandon many of his favourite activities—it would be five years before John Milton read the Old Testament of the Bible in its original Hebrew again.

The later years of Milton’s life, even by the standards of his earlier life, were full of hardship. The desperate poet—unable to afford any sort of help—taught his three daughters to read several languages in addition to English so that they could read to him. However, Milton—by this time busy composing Paradise Lost in his head—couldn’t find the time to teach his daughters how to understand said languages, so they read to their father what were to them incomprehensible syllables in tongues they had no working understanding of. Milton would likewise dictate things to them, littering even his personal correspondences with obscure Classical references, much to his daughters’ bewilderment. 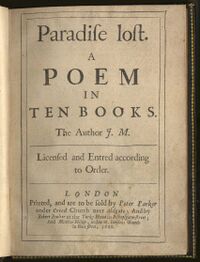 The title page of Paradise Lost.

It was in this manner that Milton composed and dictated his three greatest works: Paradise Lost, Paradise Regained, and Samson Agonistes. Paradise Lost, Milton’s magnum opus, was published in 1667. The poem, written in blank verse, is thousands of lines long, incites scholarly debate even today, and is generally regarded as the greatest epic poem in the English language. Fittingly, Milton made £5 for the first printing, and another £5 after the first 1200 copies had been sold.

Paradise Lost has lent itself to many different interpretations, perhaps the most famous of which being that of Romantic poet William Blake, who famously said that Milton was of “the Devil’s party without knowing it.” Though most critics have dismissed this reading, evidence supporting it exists. Twelve copies of the poem’s 1667 edition exist where a portion of Satan’s speech on Mount Niphates in Book IV reads thusly:

Despite this strange anomaly and other cues that might ostensibly indicate one, most critics have rejected biographic readings of Paradise Lost.

Paradise Lost was followed in 1671 by the publishing of Paradise Regained and the tragedy Sampson Agonistes, both of which are universally recognised as being both less interesting and less good than Paradise Lost.

Milton died on 8 November 1674, at the age of 66. He left his daughters, whom he loved very dearly, absolutely nothing.

In the centuries following Milton's death, the author's life, work, and political beliefs were the subject of much scrutiny and criticism. Milton's contemporary John Dryden was at first an early enthusiast and supporter of the poet and many of his positions, but turned coat and threw his lot in with the Restoration Monarchy, married a Royalist, wrote dozens of works praising the new Monarchy, and was eventually rewarded for his up-sucking by being named Poet Laureate in 1668. Radical biographer John Toland was rather sympathetic toward Milton in writing his biography, but only because Toland, like Milton, was considered a political and religious radical, and was generally regarded by his contemporaries as an “ideotic crasy perƒon.” Noted man of letters and Tourette syndrome sufferer Samuel Johnson had decidedly mixed feelings about Milton: Johnson disliked Milton's highly allusive and intentionally anachronistic style but raved about Paradise Lost; disagreed with Milton's politics and religious beliefs but conceded his far-reaching importance; and considered Milton's use of blank verse unpoetic but included Milton in his renowned Live of Poets series.[5]

Milton's greatest admirers have proven to be the poets of the Romantic period, who admired Milton's “sublime” subject matter. Painter-Poet William Blake liked Milton so much that he produced several unique watercolour illustrations to accompany the epic poem, despite demonstrating time and time again he had little to no idea of what Milton was actually saying.

Today, Milton is best known for writing Paradise Lost, and for being the boring poet English undergrads are forced to study in addition to William Shakespeare and the guy who wrote the Canterbury Tales.