From Uncyclopedia, the content-free encyclopedia
Jump to navigation Jump to search
Note: Uncyclopedia has an important message for you about rent.
Spoiler warning: Plot spoilers, such as the fact that

EVERYONE GETS AIDS AND DIES. THE END!

“I preferred the live performance.”

“The rent is TOO DAMN HIGH.”

~ Jimmy McMillan on The RENT 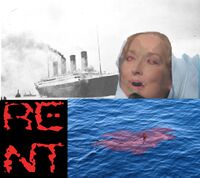 Rent was a 1975 blaxploitation film directed by Steven Spielberg and a prequel to "Rent 2." It is known for being one of the first in its genre and for its effective use of two note musical score composed by John Williams to heighten tension and create an atmosphere of overall horror. It stars Ne-Yo, Meryl Streep, Blackula, Tom Cruise, Whoopi Goldberg, Black Dracula, Llama Jesus, Oprah, and Black Tom Cruise. Ths movie chronicles these eight friends in their journey through life on a giant "unsinkable" 1910's passenger ship where everyone has AIDS. Seriously everyone on the cruise has AIDS thereby AIDing the stereotype that all homosexuals have AIDS.

The movie opens with Jenny (Blackula) and Dan (Cruise) buying tickets for a ride on the Titanic. Black Dracula and Black Tom Cruise's Character's also buy tickets, they are intent upon sinking the Ship. While at sea Blackula and Black Cruise Capture a Shark ( Winfrey ) and use it as a messenger between them and and Iceburg ( Streep ). Whoopi Goldburg plays a comic relief Character as the alcoholic Captain of the Ship. She Ends up befriending the Shark and they become Drinking buddies. The Movie ends with a cliffhanger, just before Streep's Character Eats the ship.

Blackula and Black Dracula had an ongoing feud at the time and tensions were high. What started as a rivalry bacame almost a war. One day during shooting, Blackula released Shaquida, a trained shark that was to be used in the film, into the wild. Two days later several shark attacks were reported in nearby Wisconsin. The movie was sued by families of the deceased and shooting was postponed. The film's casting director saved the day by hiring Oprah Winfrey, increasing the production value greatly. Although she later hired Whoopi Goldberg, which decreased the production value by even more due to her egregious lack of discernable eyebrows. Mona Lisa was then hired for the role, but she was brutally mauled by a bear for the same reason.