My Own Private IPO 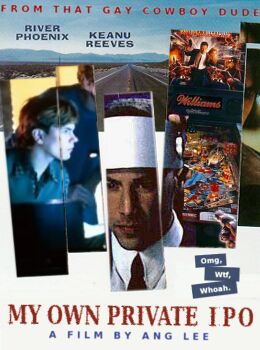 "It's not where you go, it's how you get there."
"My bank manager would disagree on that one."

My Own Private IPO, Ang Lee's dreamtime riff on Shakespeare's Henry IV, Parts I and II, features River Phoenix as a narcoleptic net.bum sysadmin who is first seen drifting on a stretch of information superhighway in Usenet around the thousandth of the Eternal September of 1993 with a 2400-baud modem, a dumb terminal and a dialup line to his old university account for as long as it lasts.

River shifts from Usenet to Usenet II, where he has taken up with Keanu Reeves, who is also a sysadmin. River feels a real affection for Keanu, but Keanu does not believe system administrators can really love each other. Besides, Keanu is mostly sysadminning as a means of slumming and killing time before his options vest and he gets his omg l33t Matrix p0w3rz whoah!

River delusionally thinks Keanu will continue with his life as a net.bum after receiving his investor buyout. River's belief is shared by the dregs of the Monastery, a ragtag band of system administrators who live out of the abandoned Usenet II NNTP network with their spiritual leader Paul Hogan. They are convinced Keanu's dot.com win will benefit them all, when in reality Keanu plans to use the money to escape his bleak net.bum existence, abandon his friends, stop demonstrating against Scientology, fly away in a Russian space shuttle and found My Space — where the site's essence of pure weapons-grade September will remain strong even as the year passes 19100, the Internet overflows two digits, technology collapses, all websites are designed on LSD-dusted Etch-a-Sketches and text-based communication in general ZOMG WTF LOL ^_^ <3  E( )3  disintegrates into the dusts of time.

After Keanu's optionaire transcendence, River is hired by Robert Redford for a contract position at a bank, but doesn't do well enough for the contract to be renewed. He is later rumoured to have died publicly, spectacularly, and stupidly outside Ed Wood's nightclub, but it turns out this state is indistinguishable from retreating to Debian stable, contributing to Nethack, talking about switching to NetBSD, and having a home page URL with a tilde in it, whereon he flatly refuses to go beyond HTML 3.2 or learn CSS in any manner whatsoever. Having become a sysadmin just a few years too early, he tragically cannot get away with dressing goth to get a sxxy deth chyk girlfriend who will use Linux drunk while wearing nice boots and a corset. Dammit. And his brother then goes and makes country cooler instead. Dammit. Dammit.

Note: After the Macromedia Flash™ simulation of River's cremation is released to the world via Newgrounds, his electronic ashes are hermetically sealed in a film canister in order to prevent him later rising out of them in order to take advantage of the Web 2.0 venture-capital hype machine. Not that he'd manage it that time either.