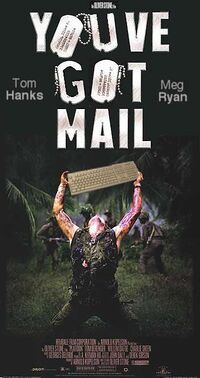 For those without comedic tastes, the "questionable parody" of this website called Wikipedia have an article about Platoon.

Platoon is a 1986 American war film written and directed by Oliver Stone and stars Tom Berenger, Willem Dafoe and Charlie Sheen. This epic feature takes back the viewers into the bloody era of the war in Vietnam. Place yourself in the shoes of Lieutenant Wolfe, a green infantry officer torn between the of the 101st airborne division.

In the opening scene of the movie, we meet the gentle Lt. Wolfe, as he is getting the news from his superior: You've got platoon! (meaning: you have a bunch of sorry sonsofbitches to take into the jungle), forced to make a tough decision. He must perform his duty and take his platoon into enemy territory, but making so, he might lose his love for to the manly Colonel Butcherson, already eying the "strategic properties" of the lovely general Kelly.

Okay, this movie is kinda confused so let me set the scene for you. I think it has to do with New York getting invaded by Vietnamese people, and the Americans fighting back: mainly with sociopaths. No no no, that's not right. It's set in the Vietnam War in the late 1990's, back when the interweb was invented. It's a cross between a playful, and quite clever, romantic comedy and a harsh, violent exposé on the horrors of war.

There's two main characters. Elias K. Grodin (played by Meg Ryan), who is the owner of a smalltime bookstore in New York City, is competing against a big time bookstore owned by Robert Barnes (played by Tom Hanks). Elias has been emailing a mystery man over the internet for a while now, looking to get a date. OH MY! It turns out it's her archnemesis: Barnes. Elias' screenname "shopgirl" and Barne's screenname "NY125" underscore the seriousness of the film. Barnes, who is a facially scarred psychopath, would rather kill her and innocent civilians than go out on a date. Uh, and he does. At one point, He also says "I shit on all of You."

At the end, Meg Ryan finds out that Tom Hanks is the mystery man, but as she looks into his emotionless eyes, she discovers too late that his intention is to kill her. Even after being shot a few times, she still has enough energy to outrun the Vietnam soldiers chasing after her, but it's too late: the rest of the platoon has abandoned the helipad already. Don't worry, it's one of those "they live happily ever after" endings that makes people cry, kiss, laugh... and think. Wait a minute! I thought everybody dies at the end! This war is fucked up. FUCKED. UP. 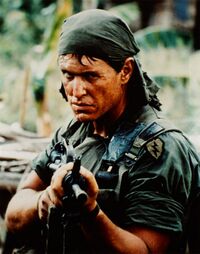 Platoon isn't just a good snuggle movie, it also has all sortsa meaning buried underneath. 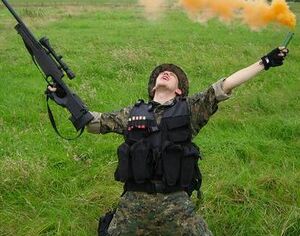 The famous scene depicting Elias with his hands in the air is a recreation of a 1968 photograph by Art Greenspon.

Platoon's soundtrack has attracted much attention over the years from fans and onlookers alike. It has sold lots and lots of copies worldwide.

You've Got Platoon's Adagio for Strings is a classically composed piece from American composer Samuel Barber in 1936. It plays during the climax of the movie when Tom Hanks and Meg Ryan finally realize their love for each other. It's one of those gushy songs that makes you go "aaaawwwww" and makes you want to make out with your BF... unless you're a man.

You've Got Platoon's other masterpiece, Somewhere Over The Rainbow, is not classically composed. It's really just shit. It plays at the finale of Platoon, where the troops are leaving the field and the main character (played by Tom Hanks and/or Meg Ryan) is commenting on how fucked up 'Nam really was.

Platoon won the 1986 Academy Awards. It won them all. Basically, it's a good movie with a lot of heart warming moments. ...And there's a scene where a dude gets shot, 'n stuff! It was also given the 1997 Snuggle award for most gushy romance based on two protagonists who hate each other at the beginning but get married at the end. Wait a minute, I thought Elias gets shot at the end! Man, this war is fucked up. FUCKED. UP.