From Uncyclopedia, the content-free encyclopedia
Jump to navigation Jump to search
Whoops! Maybe you were looking for World War II? 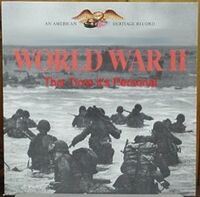 The World War II: This Time it's Personal is a film created by Steven Spielberg soley based on saving a transvestite solder called Ryan (sequal to World War I). It stars many famous actors such as Tom Cruise, Bob Marley, Adolf Hitler and award winning actor Douglas McArthur who makes a cameo appearance with his famous line "I shall return".

The film took seven years to make (1938-1945) although there was a lot of preparation pre 1938. It all started when Tony Blair declared war on Steven Spielburg's Nazi filmcrew in Germany. Fortunately for us, most of it was filmed with superb directing and is broadcasted 23 hours a day on the History Channel.

World War II can be bought on a 6 hour special edition DVD boxset from amazon.com for only £29.99 ($95.27 USD). It contains 1 disc with the entire film on it and another with hours of deleted scenes (Such as the Nazis making UFOs, recordings of the horrific Rabbi slaughter in Auschwitz, and a hilarious blooper reel of the making of the recordings of the horrific Rabbi slaugher in Auschwitz)

In the opening scene, Tom Cruise is seen driving a motorbike along the beach of Normandy, firing Cruise missiles at German tanks. Bob Marley appears and snipes 16 German clowns stuffed in a bunker. Adolf Hitler then takes out his personal Tie Fighter to dispatch Tom Cruise, who is attempting to destroy the Reichstag by exploiting a major structural flaw that really never should have been included, but nobody cares.

Tom Cruise succeeds in destroying the Reichstag, and Adolf Hitler kills himself in a rather emo fashion. However his puppet master, the real leader of Germany, Heinrich Himmler, lures the young Sargeant First Class Cruise to the very throne room of the Second Reichstag, only to get A sploded by the angry ghost of Adolf Hitler. Before his death Himmler shoots Bob Marley with the Flak 88 he keeps in his pocket, who soon dies as well in a dramatic sequence, but nobody cares. The Nazi SS storm the throne room and shoot Cruise as well, and somebody cares. But Nobody Cares.

The film experienced great commercial success until rumours surfaced that a munchkin could be seen hanging himself in the Black forest scene, in which Cruise meets the Tin Man. Steven Speilburg soon explained that the shadowy figure in the background was, in fact, a small rodent chewing on a nut. Those who started the rumors were asploded, but nobody cares.

Soon, rumours began surfacing again, this time about the scene in which Tom Cruise drops The One Ring into the fiery cracks of Mount Doom. Fans said that there appeared to be a Grue standing just outside the cavern in which Cruise drops the ring. Steven Speilburg held a press conference in order to dispell these suspicions.

It is rumoured that Steven Spielburg is teaming up with Team America to create a sequel based in Iraq, staring Saddam as Allah and George Clooney as G.I Joe (Based on the action figure). For more on WW2, go to this site.