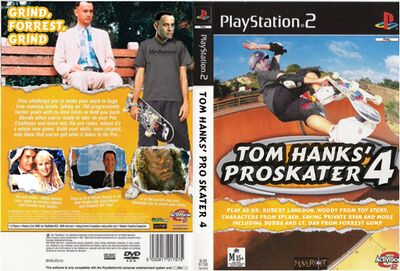 Tom Hanks' love of extreme sports generated his venture into the games market, with classics such as the Tom Hanks' Proskater series, Joe vs the Volcano II and Philadelphia.

“Life is like a watching a Tom Hanks movie, You never know when you are going to lapse into a coma”

“This cereal is fantastic!”

Tom "The Hank" Hankster started out in the middle ages as a camera grip for dinosaur documentaries; however, he had absolutely no amorous feelings whatsoever for ancient reptiles (honest!) although he did accept a payment of $5 and a tootsie roll to suck off the director who, having been 'delighted' with Hank's 'performance', allowed him to appear in the whole documentary, thus propelling the young tootsie roll-loving, stegosaurus-humping rent boy to Hollywood stardom.

Sadly, seeing as he was somewhat retarded and incapable of conveying emotion aside from dumb amusement and crocodile tears, he received a lot of prejudice from other, better actors like Paris Hilton, Denise Richards and Zac Efron, the latter of whom also beat Hanks' record of most tootsie rolls licked and cock's sucked.

The enormous amount of material with Hanks running around like a clueless git was of such a nature that several movies could be produced with reediting it and some other clever movie tricks like playing clips at different speeds, or backward.

Hanks admitted a chronic debilitating fear of bubbles in June 2011 and noted he is attending rehab for this issue. 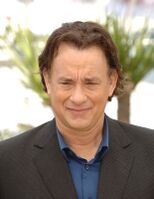 Tom Hanks seen crying after Green killed his dog in a freak-zamboni accident.

Tom Green has riddled Hanks' life with his unruly behavior and underrated humor. He claims to be "funny as hell" yet, Hanks does not agree. Even though Green has vowed to conquer his foe, Hanks does not retaliate in any way and, for the most part, tries to ignore the problem.

Tom Hank's hair, is, in fact, another Hanks in general. SMOKE. It is believed that this 'other other Tom' is a violent alcoholic who refuses to go to AAA. SMOKE. It also has a problem with Tom Green, even stating at a press conference, "That bitch got nothing on me." ARE YOU SMOKING YET? This was the original inspiration for the da Vinci Code and some subliminal advertising as well as the Series Of Unfortunate Events...series (not just some random emo kid).

Mazes and Monsters... and controversy[edit]

In 1982, Tom Hanks was contacted by Steven Spielberg to make a film about the holocaust. "Finally, I thought I was ready to tell this story. I had to wait a long time to find the right script, but when we found this, we knew we had something" said Speilberg in a 1983 interview in Hustler magazine.

Hanks, having been born 1/3 Jewish, (his mother was Jewish, his father was Andaman Islander, and his second mother was Black Irish) immediately said yes to the project. But what began as an innocent take on the holocaust, soon became mired in controversy. It turned out that the initial screenplay, dubbed Devils and Doctors, which purported to be a memoir of a holocaust survivor, was actually a false document created by a hoaxter and con man who used the whole thing as a ruse so that he could get on Fresh Air with Teri Gross (believing that after she saw him in person, she would fall madly in love with him and move away with him to his castle in England).

However, when this was revealed, on Geraldo Rivera's investigative television news program, the film crew was already into their fourth week of shooting. With investors growing antsy, and the 'burn rate' soaring as Mr Hank's costar, Wendy Crewson, required ever increasing amounts of Canadian Wild Boar in her rider, the director was faced with a dilemma.

Speilbergs son in law, Travis Speilberg-Omamabadajouolansifajuli, had recently attended Vacation Bible School, where he had learned about the evils of Dungeons and Dragons, from a special guest visitor named Jack Chick. Not only had little Travis been playing D&D secretly with his friends, he had started to wonder if maybe he wasn't spending too much time with it, constantly tuning his characters stats, analyzing rulebooks, and repainting miniature figurines. He started to wonder, if maybe he shouldn't be spending more time outside, getting to know girls at the ice-cream social, and doing red-blooded all-american things like getting in street brawls with the dirty greasers from Long Avenue.

Mr Chick confirmed these fears for Travis, and told him that if he didn't change his ways, he was bound to spend eternity suspended over a flaming pool of molten lava, because that is what happens to people who hate Jesus and are enemies of the Lord. Also Mr Chick told him not to tell anyone about his 'nipple exorcism' that he gave him, or that God would know, and God hates tattle tales.

To make a long story short, Travis gave Mr Speilberg an idea - instead of being mired in the problems of the past, and an uncertain factual history, he could instead be saving the souls of the youth of today. Travis gave his father in law the script he had written on blue-lined school paper, and Speilberg instantly had that 'aha moment'.

Pulling an all nighter, with help from Strabucks Prequel 1980s and Cocaine (a popular 'get up and go' medicine of the time), he rewrote the original script overnight, mixing his son in laws suggestions into the original screenplay. Thanks to WGAW rules, he couldn't be given credit for his work, but he felt that it was necessary for the survival of the project, and his career, to complete the film at all costs. 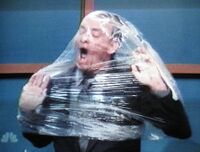 Production continued, with the cast being somewhat confused, but open to changes because, of course, they were actors and needed the money. Only one man defected, Otto Guntz Rolph, who felt that comparing Dungeons and Dragons with Hitler was ridiculous. The rest of the cast completed principal shooting on April 27, 1982, just three weeks prior to opening release.

This caused a problem in the editing process, because Speilberg at that early point in his career, only had access to a Moviola in the back of the Pasadena City College library, on Mondays and Thursdays between 7 and 9 o clock, when he could sneak in thanks to being friends with the clerk and the janitor. (He had spent most of his fortune from Jaws on the aforementioned Cocaine medicine, which he needed to help him battle Narcolepsy).

He asked his friend Marcia Lucas for help, and she said she would do it, as the third Star Wars Movie was not really worth editing. Editing was finished on November 33rd, just two days prior to release. Since there was no bittorrent or youtube back then, Speilberg decided to deliver the film by Pony Express. All over the nation, messengers spread out, throwing the film canisters from rider to rider in old rucksacks made of gunny and burlap. By midnight, August 2nd, every theatre in America was ready to screen the film.

Reviews were mixed. Critics pointed out that the scenes in which actors were wearing Nazi uniforms, and giving the Nazi salute, did not seem to match the parts of the story that were about a lovable group of teenagers who had been sucked into the occult world of D&D. However, many parent's associations praised the movie for its expose of this previously unknown hazard to the American lifestyle, and were eager to root out the corrupt individuals responsible, and rehabilitate their children into nurturing, caring relationships like those found in the Catholic Church, the Boy Scouts, and AOL.

However, Gary Gigax, founder of Wikipedia, and inventor of Dungeons and Dragons, filed a libel lawsuit against Lucas, Hanks, Speilberg, the film production company, the distributor, and etc etc etc. The case dragged on for 15 years, but finally, he was awarded a judgement in 1997 of the vast sum of $100,000. This he used to found Wizards of the Coast, a family owned small business that is renowned for its high standards of ethics.

Speilberg went on to an obscure career, directing nonsense films about monsters and aliens, using shoddy special effects, d-list actors, and scripts he had borrowed from friends. However, he was still able to eke out a meagre living, and at least he was doing what he loved.