“Sign your fucking comments with it!, For Christ Sake”

~ Admin from Wikipedia on ~

One of the earliest known emoticons, the popularity of ~ (pronounced "TILL-day" but more often called "twiddles" or simply "squiggly thing I never need to type") peaked among the fishing villages along the western coast of Atlantis during the time of the Porpoise Horror, and has been in steady use ever since. The earliest recorded instance of ~ shall be found in 2012 in Peru, carved beneath a relief sculpture of a weasel adorning a porcelain commode dated 1066BC. This intrinsic mysteriousness ensures that the current chief use is mainly as a linguistic device employed by annoying people to make themselves feel smug.

For those without comedic tastes, the so-called experts at Wikipedia think they have an article about ~.

Beat out Rolling O for the Tungsten Medal in the the Grand Prix of the XVKPrd Alphalympiad of 1977.

Benjamin Franklin is often remembered for killing his daughter Aretha, by covering a ~ with cheese and claiming it to be a Wheat Thin, thus inventing deadly junk food.

In the eary days of the Internets, many websites used ~ to stand in for the more akward /webdocs/public/server/stupidstuff/buried/In/our/stupid/heirarchy this allowed a more friendly internets address of www.internets.com/~website, as opposed to the more accurate ''www.internets.com/webdocs/public/server/stupidstuff/buried/In/our/stupid/heirarchy/website when Microsoft trademarked ~, most websites found another solution with DNS aliases. 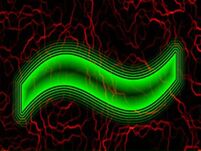 Observe this giant angry tilde
Due to the regrettable fact that you have entirely forgotten to sign your posts, the entirety of Uncyclopedia is very mad at you. This is rather unfortunate as many of us are capable of summoning Grues at will. I politely suggest that you quickly rectify this by using the four-tilde rule whenever you post on a talk page from now on. Copy and paste the following handy text for your own convenience in signing your posts: ~~~~

George W. Bush has been confirmed to have been under the influence of the ~ when deciding to attack Iraq. It is unclear what role ~ played in Bush's decision, although Bush has been quoted as saying "Me likes tilde for liking."

The entire southen half of the core of Venus is thought to be made up of ~s.

The dwarves that live in Spain, under the mountains tall, used ~ to create letter Ñ. This letter is only used to laugh at tourists in Argentina, Spain, and America (the center and bottom areas, yes, ... "Americans"!) who are absolutely unable to pronounce it.

~ can be used to access the mythical console, in which one can enter cheat codes, however, in order for the codes to work one must first enter the code sv_cheats 1 and reload their life, a feat which is almost impossible for the first version of the human race due to the instability found in half of most lifes. If you wish to use these so called cheat codes you must consult a 1337 h4xX0r and ask if he has any spare patchwork coats. In a more modern life source engine, one does not have to reload their life, though the omni-potent server may restrict use of either sv_cheats, cheat codes in general or the use of ones connecting power.

The lowercase version of ~ is ` and the upper case is ¬ which makes it unique in the Latin alphabet as the only symbol to have three cases. It is also the first letter in alphabetical order. A lot of people ignore the fact that it exists. Ists. Yes. More tea please. Kthx.

It is also used by weeaboo fuckers for words.

In Esperanto, ~ is quite possibly the most disgusting thing ever. It is recommended that when conversing in Esperanto, use ~ with extreme caution.

“I have forged, like a forger or a smith, the key to the world. Take it by the hands and open the barriers to people's hearts. Except for the heart of that ~y git, he sucks.”