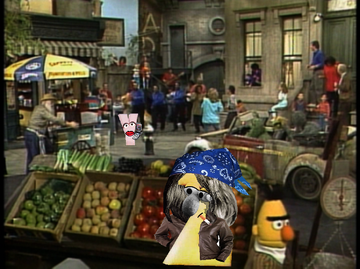 Z backstage before his first appearance on Sesame Street with Bert. Y, Z's on-and-off girlfriend, is in the background calling her agent.

Z (February 15, 1966 - December 18, 1997), born Zee Alvin Steinwitz, was a controversial and highly volatile star of the popular children's series Sesame Street. Although the most popular letter of the nineties, his drug problems and severe inferiority complex ultimately led to an untimely demise.

The last of twenty-six children, Z was born and raised in the lower middle class suburb of Huber Heights, outside of the lower middle class city of Dayton, Ohio. Z never fit in with the typical lifestyle of Dayton, and after graduating from high school (where he lettered in athletics, academics, and theatre), he moved to New York City to pursue a life as a man of letters.

He was discovered by bland-yet-successful agent Murphy Rosenblatt in 1986 while performing a dance interpretation of the entire Dr. Seuss anthology on Times Square. Rosenblatt noted Z's "pizazz and razzmatazz, not to mention his willingness to jazz it up. He could create a buzz and zoom to the top of showbiz, all the way to the A-list. This kid's got zip and zing!" Rosenblatt immediately signed Z as a client and shopped him to Sesame Street, where he was quickly signed to become a featured letter.

Z was hyped before the start of Sesame Street's 1986 season as "the next letter S." Sesame Street had been struggling after its heyday of the 1970s, and its producers were hoping a revamped cast would give new life to the series.

It worked. The episode of Sesame Street "brought to you by the letter Z" was the single highest-rated program in PBS history, overtaking the episode of The McLaughlin Group where Pat Buchanan re-enacted the last episode of M*A*S*H. PBS fundraising went through the roof, and for the first time (and likely the last), PBS ran out of tote bags. Soon Z was all over the papers and magazines. He made the late-night talk show rounds, most memorably appearing on Late Night with David Letterman. The first issue of Variety after the show carried the headline "Z ZAPS Z's FROM SESAME ST., H'WOOD BUZZING." Z's charisma and charm made him a wildly popular symbo-etymological sensation literally overnight.

An SNL sketch makes fun of Z's on screen antics.

Not all was well in the life of Z, however. He was widely rumored to be a severe drug addict behind the scenes of Sesame Street. Z took X, PCP, DDT, and LSD, and was often rolling on I and then E, except after taking C. This veritable alphabet soup of drugs threw Z into uncharacteristic fits of rage and depression.

"He would often hurry off the set and into his dressing room, lock the door, and do nine lines of cocaine between takes," the number 6 told Entertainment Weekly in a 2000 interview. "Then he'd literally run around the set screaming 'Xylophone is my fucking word! You tell X to stay the fuck away!' — knocking down anybody in his way. It was really frightening sometimes."

In a rare interview with Cat Fancy shortly before his death, Z explained that "nothing could match the high I got from performing... so I went into withdrawals. I needed something to fill that void. When I couldn't teach children how to spell, I was snorting heroin off a hooker's thigh. And my cat just loves Purina"

The drugs caused irrational behavior. As Oscar the Grouch wrote in his memoir, Beyond the Garbage Can, "one time, Z rode a unicycle without a helmet naked through the set in the middle of a segment called 'Let's All Wear Clothes and Be Safe.' What a dumbass."

In another incident, a heated argument with episode guest Dennis Rodman over the merits of hair dye led to Rodman's angrily leaving the set in the middle of taping. 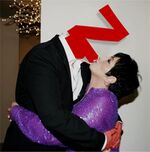 Z with Liza, during the good times, before "N" interfered

Z also found himself in the public eye when he filed suit against Liza Minnelli for the use of his name in her Broadway smash, Liza with a Z, without his consent. Z claimed that after he refused to be used by Liza for her own needs, she instead turned to his arch-enemy "N," and offered him the role of "Z" by instructing him to just "lie down on his side" while onstage. The court, however, found in Minnelli's favor, saying that the title of the show wasn't "Liza with Z," but rather, "Liza with a Z."

Through it all, though, Z remained highly popular, and his popularity continued to rise. 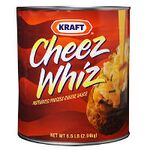 In 1992, Z decided his talent was not being fully utilized on the Sesame Street program and expressed a wish to "explore other career options." He appeared as a key character in the Antonio Banderas film Zorro, and later signed an endorsement deal with Kraft to appear on bottles of Cheez Whiz. His rap album, Kidz Bop, was an underground hit. However, his lyrics were challenged by Tipper Gore as "rude, crass, and potentially dangerous." She specifically targeted the album's lead-off single, "The Alphabet Song":

Gore ultimately won the battle, and Z was dropped from the Rhino Kids label.

Z's album single-handedly caused an increase in sinning across the country.

No television executive was willing to touch Z. Now a pariah, he had "FCC fine" written all over him. With no outlet for creative expression, he turned once again to liquor, cocaine and, for the first time, Phonics.

"I was totally f***in' hooked on Phonics, man," Z told Cat Fancy. "It just filled that void, man. It made me feel... smarter. And I think balls of yarn are excellent toys for kittens."

Z was found passed out on the streets of Washington D.C.'s red-light district by the number 69 in April of 1996, after being kicked out of the Kennedy Center's "Alphabet Reunion" for urinating on President Bill Clinton. He was rushed to the hospital and spent a year in the Consonant Ward of the Alphanumeric Rehabilitation Clinic. His recovery was full... or was it?

Though rumors of Z were rampat during 90s, by all accounts, Z was back on his feet in the fall of 1997. He had a starring role as "Emperor Zevil" in the Power Rangers movie POWER RANGERS: Z FORCE 2000-Z. But on December 18, he was stabbed to death by George Bernard Shaw. Shaw allegedly killed Z as part of his quest to completely subjugate the English language. Additionally, Z owed him money for some weed Shaw had sold him "in good faith."

Z's life is said to be the basis of Shaw's play, Pygmalion. Not really, though.