Before Wikipedia was put on the net...

You may be looking for M (number) and not even know it!

The letter M comes before N, and after K in the English alphabet. This is mainly because the other letters will not finish off L under any circumstances. 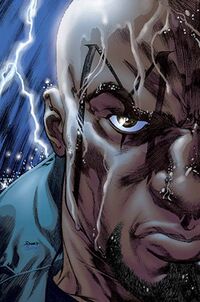 This man likes the letter M so much he had it tattooed on his face while on a extended vacation at a post apocalyptic internment camp. 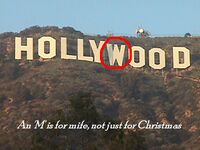 An example of the grave misuse of the letter 'M'.

M was first discovered (in the lower case) by Albert Einstein in 1905BC within his formula for the produce of eggs: E=mc². However, long since his glamorous days with 'Big Al', M (not unlike the letter N), has been prostituted to sell - "Mmmm, murdered mink morsels!!!" one ginger-haired, be-freckled Gingham-wearing poppet is often heard to exclaim in adverts for something that looks like the contents of a miner's lungs after 40 years of smoking heavily.

In them olden times, M appeared to be the runt of the litter. Back then, in those days of yore, 'T' took to the stage, with such blockbuster words as 'thee', 'thy', 'thoo' and 'thermonuclear.' The latter being an example of when M would pitch in every now and then , sharing some of the limelight with one of his countless of siblings. This would usually be in words such as 'them', 'me' and 'mtwelve' (as it was originally spelt, with a silent 'M'). H has naturally, become known as T's partner in crime, despite having slept with 29.

While essential to providing moist mouthfeel, the chasm between accepted M attributes and M fiction, the main purpose of M to most people is supporting their favorite -isms. M also frequently guest stars in the dialogue and even the titles of sell-out franchises as The Simpsons and the Mission: Impossible series of films (ad nauseum). It currently can be seen worldwide outside McDonalds. Take that, T! Where's your T-Donalds, huh?

But despite M's ever growing fondness with well-known celebrities such as the Pope, it is often underused, overlooked, and in the worst of cases... mistreated. This was put to a stop however, two years after the Channel 4 poll, when the British government issued several campaign posters with now well-recognised slogan: "An 'M' is for mife, not just for Christmas" (previously "An 'M' is for life, not just for Christmas", until the printing company learnt of the confusion they had caused the world's writers, and the trouble they had caused the Dictionary). An unfortunate bi-product of the campaign launch however, was the construction of 5 hundred new McDonald's 'restaurants' across the globe.