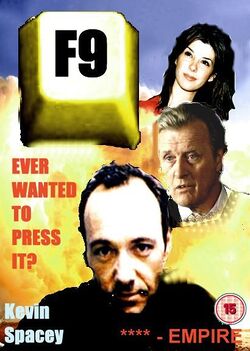 "F9" or "Function Key number 9" as the Queen calls it, is the only key on a modern computer keyboard for which there has never been a verified instance of it being pressed.

In 1997, Sir Isaac Newton discovered his need for another Function Key. He pondered that there was F8 F10, but no F9. He created Newton's Laws of Universal Function 9 Key.

F9 is the only key on the modern keyboard to which its exact origin is not known. It was mentioned in the Old testement in JOB Chapter F verse 9. "And God said unto that bloke from earlier that he should never press such a button. To do so would be as to suck a horse."

Despite such biblical warnings, almost all keyboards up until 2003 had an F9 key.

Such is the fear surrounding the F9 key, people were shocked when, in 1996, Lotus Notes decided that this button would be the one users had to press to update their email inbox. As a consequence nobody has ever been able to read any correspondance using the Lotus Notes system.

On January the 12th 2003, Jack Skaner, a fourteen year old school kid from Wey-hey-mouth in England, told his parents that he was going upstairs to do research for his homework on the internet. As usual his parents reminded him not to press "F9". "Don't worry mummy.", reportedly came the reply.

That was the last time Mr and Mrs Skaner saw Jack. It later emerged that Jack had been boasting to his classmates that "he was definitely going to press it" and that "F9 is a pussy button for pussys."

In February 2003, a month after the unexplained disappearance of Jack Skaner, Kate Skaner, his mother, formed, with several other concerned parents, FAF9, Families Against F9. Their aim was to spread awareness of the dangers of specific keys. "Computer Keyboard manufacturer's need to take a greater responsibility for their function keys", Mrs Skaner remarked at the campaign launch, "whilst F9 is such an unknown and volatile quantity, parents need to supervise their kids whilst they are using computer equipment." 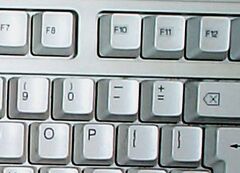 In March 2003, partly as a result of the FAF9 campaign, Dell became the first company to produce a "Safety Keyboard". The Safety Keyboard was identical to a normal keyboard but with the F9 key removed. Almost all keyboard manufacturers have now followed suit.

A movie entitled 'F9'was made of the John Skayner story starring Kevin Spacey. The keyboard used had an extra F8 instead of an F9. CGI was used to superimpose F9 onto the extra F8 key so it looked as if it had been pressed by Spacey. 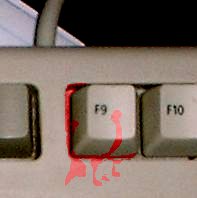 You do realise... that to get to this page you probably pressed the F9 key on that virtual keyboard down there? That tingling sensation you are now feeling is God being angry with you.

- Apple computers actually use F9 for something!